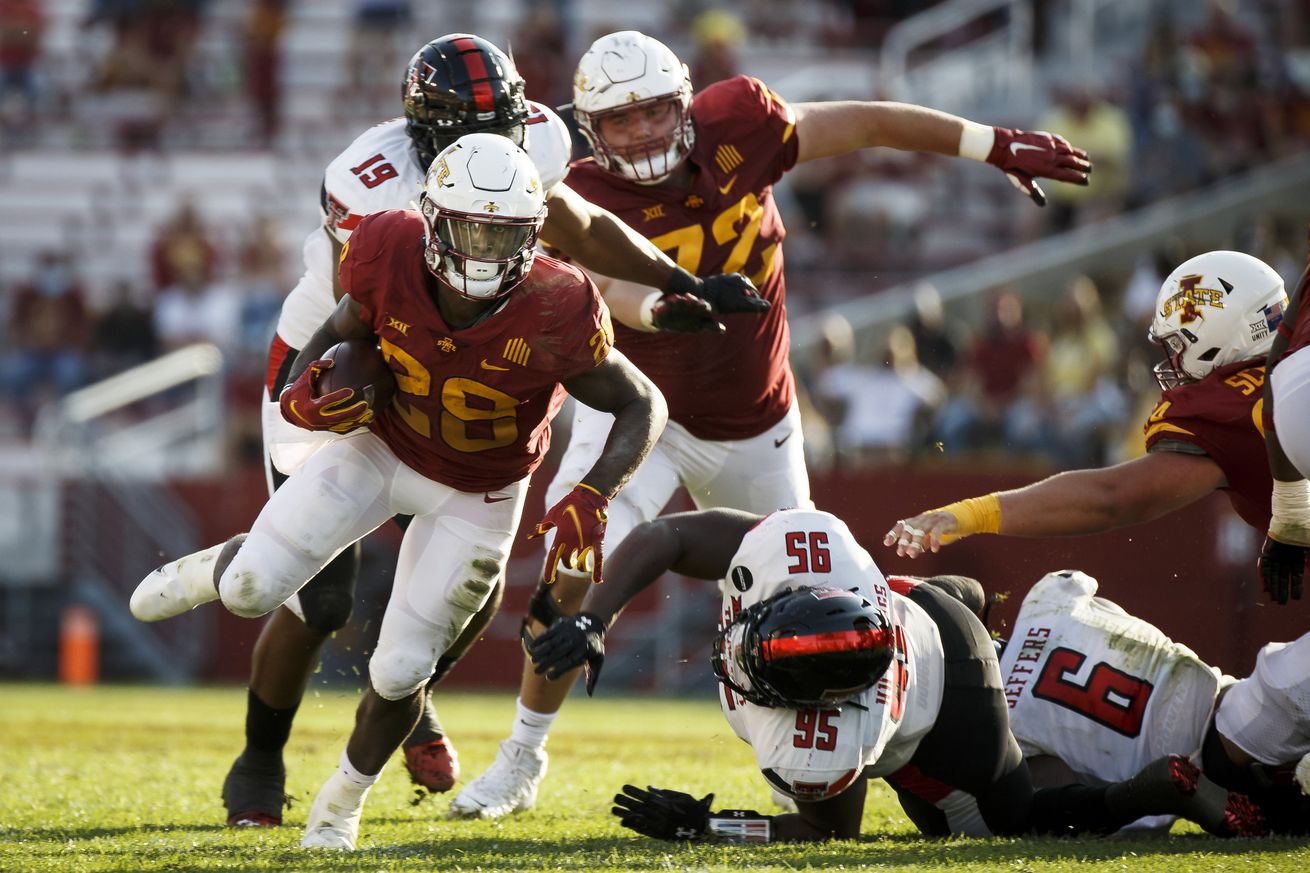 It’s going to be a slow one this Saturday in the Big 12, check in on where the teams line up after week 5.

Week 6 in college football brought us an abundance of high scoring affairs and multiple top-25 matchups. 6 out of 10 Big 12 teams played last week where we saw Kansas State take down TCU in Fort Worth, Iowa State handle business vs Texas Tech, and Oklahoma come away with the win in a 98 point quadruple overtime Red River Showdown — truly one to remember.

Just about every time I get my hopes up on a team, the Big 12’s antics come in to rain on my parade. Can someone please explain to me why the Horned Frogs can beat a top 10 opponent on the road yet can’t win a home game vs a K-State team that’s missing their starting quarterback? Beats me.

This week will be another slow one for Big 12 fans as the teams that played this week will now swap places with the teams that were on bye last week. 4 out of 10 Big 12 teams were scheduled to play this weekend, West Virginia vs Kansas and Baylor vs Oklahoma State, though the Baylor game was postponed due to a COVID-19 breakout.

Now that Texas and Oklahoma each have 2 conference losses, the path to the Big 12 Championship is wide open with Oklahoma State, Iowa State, and Kansas State leading the charge as the only undefeated teams in conference play.

Let’s get into the 6th installment of the Frogs O’ War Big 12 Power Rankings:

The Jayhawks had the week off after getting routed by Oklahoma State 47-7 in week 5. Not playing a game is always better than losing a game right? Just about one-third of the way through this crazy 2020 football schedule now, and Kansas is still yet to find any sort of rhythm. The Jayhawks are being outgained by 125 yards per game, averaging 296 YPG for and 421 YPG against. You are never going to find any kind of lasting success in the Big 12 putting up less than 300 yards a game on offense. Les Miles and crew will come off the bye week playing West Virginia in Morgantown — never an easy place to play.

Week 6 was a very unusual outing for Texas Tech being that they only put up 15 points and 270 total yards of offense. Backup quarterback Henry Colombi was brought on for the final two drives of the game, and in those 2 drives he ended up out-gaining Tech’s first string Alan Bowman. Colombi completed 10/12 passes for 115 yards and a touchdown while Bowman went 13/22 for 97 yards. Could there be a quarterback competition brewing in Lubbock? Only time will tell, but for the short periods Colombi has been in the game he has played well. On top of only gaining 270 total yards, the Red Raiders allowed the Cyclones to post 516 yards on offense. Can’t blame them though, Breece Hall has been an absolute unit so far this year; possibly even outperforming Chuba Hubbard of Oklahoma State. Tech gets this week off with a bye.

Aw man, Baylor didn’t lose last week so I can’t capitalize the L. C’est la vie, there’s always next week. After a tough overtime loss to West Virginia in week 5, Baylor had last week off, and will have another unplanned bye this week due to their game being postponed. From one point of view, this break could be beneficial for the Bears to resolve any issues going forward. On the other hand, the Bears already had a game postponed this year and maybe this could put a damper on the teams confidence or rhythm going into each week. The Bears were meant to host a big one this Saturday, taking on 7th ranked Oklahoma State in Wac(k)o. Unfortunately, the game was postponed until December 12 due to COVID-19 complications. Tough break for the Bears as this becomes their second postponed game of the season.

West Virginia was one of the four Big 12 teams on a bye last week, a well deserved rest after a hard fought battle against Baylor. The Mountaineers have one of, if not the most balanced offensive attacks in the conference. They are averaging 263.7 passing YPG and 177 rushing YPG, always keeping defenses on their toes. One of the bigger surprises this year from the Mountaineers, at least from my perspective, is quarterback Jarret Doege. Doege isn’t the flashiest player, he isn’t going to put up 450 yards and 4 TDs like a Sam Ehlinger would, but Doege can manage the game as good as any QB in the conference. West Virginia is currently outgaining opponents by an average of 127.2 YPG. If the defense can continue to stay strong throughout the conference schedule, the Mountaineers could find themselves climbing this list in the near future.

What. A. Game. The Longhorns fell in a crazy, 98 point, quadruple overtime shootout to Oklahoma, marking the highest scoring game in the history of the Red River Rivalry. This was a huge game for both programs, Oklahoma coming off of two straight conference losses for the first time in lord knows how long, and Texas coming off an upset loss at home to an unranked opponent. I’m sure the majority of Big 12 fans were rooting for the Sooners because now that each team has two losses, the conference is anyones for the taking. Fun stat from this game: Sam Ehlinger had 3.86x more rushing yards than all three of the Longhorns running backs combined, topped off by 4 rushing touchdowns for the senior quarterback.Texas has been all over my rankings this year, but through 3 conference games they haven’t shown me anything as a team that’s substantial or worthy of me to rank them any higher.

Really guys? After beating Texas I felt like a kid on christmas morning going into last Saturday. I was ready to see Max Duggan throw for 400 yards, Barlow run for 100, and win by 30 points, the whole shabang! Eventually, reality struck and we all know how things turned out… There are some serious question marks for the Frogs, most of them centering around the offensive line’s lackluster performance thus far. For reference, the Frogs O-line gave up 3 sacks on Duggan vs K-State, not to mention the amount of times he was hurried or forced out of the pocket; it was absurd. I don’t want to harp on what needs to change too much, rather what has been positive for the Frogs. TCU is known for having two of the top safeties in the country, but the cornerbacks have been balling out this year! The turning point of this game was a pick-6 thrown by TCU’s Matthew Downing while stepping in for a dazed Max Duggan, absolutely brutal to watch knowing Duggan would be back in any minute. Duggan is the real deal, the Horned Frogs just need the O-line to step up in a big way in order to get more production out of their sophomore quarterback. The Frogs have this weekend off, sit back, relax, and enjoy the full slate of college football games.

After an upset loss at home in their season opener, the Wildcats have only gotten better. I can’t really speak for their performance against TCU last Saturday though, even though they got the W, it wasn’t pretty. On paper one would have thought TCU won the game, but sometimes that’s just not how the wind blows. K-State had more penalty yards than TCU, had 8 less first downs, had less time of possession, and was outgained on offense by 53 yards (342 compared to 289). Oh and not to mention, THEY ONLY COMPLETED 8 PASSES. With their 2nd string quarterback I might add… Not trying to knock on the Wildcats, a win is a win no matter how ugly it may be. I am still genuinely baffled at the way that game played out. Along with the majority of the conference, K-State has a bye week this Saturday.

BOOMER! I never thought I would find myself cheering for the Sooners, not even in a parallel universe of some sort, but hey it’s 2020 so here we are. My reasoning for doing so was simply because of the fact that if Oklahoma won, the path to the Big 12 Championship becomes a whole new ball game; something that benefits all Big 12 fans (other than Oklahoma and Texas fans that is). This was a huge, huge win for the Sooners. If they were to lose three conference games in a row to open the year, their season would be toast. After four exhilarating overtimes, the Sooners were finally able to pull away with the victory. I don’t think I’m as hot on Spencer Rattler as the rest of the media is, but I definitely see he has potential and might need time to fully develop. If running back T.J. Pledger can continue performing like he did last week, 131 rushing yards and 2 touchdowns on 22 carries, the Sooners will be set.

If you haven’t heard his name enough this year, you’ll be hearing it some more. Breece Hall is the man. Last week against Texas Tech, Hall ran for 135 yards and 2 touchdowns bringing his season totals to 531 yards rushing and 8 TDs; already over halfway to the 1,000 yard mark. Hall currently ranks 9th in yards per carry amongst running backs with at least 50 carries this year, and ranks 2nd overall in total rushing yards. This also may have been the best Brock Purdy has looked all year, throwing for 302 yards and 2 TDs. The offense was clicking, putting up a whopping 516 yards. An interesting stat that stood out to me is that Iowa State doubled Tech’s time of possession. The Cyclones have next week off before a big one in against Oklahoma State come week 8.

Well it looks like the Cowboys are guaranteed to remain undefeated this weekend as their game against Baylor was postponed due to complications surrounding COVID-19. It’s safe to say the Cowboys will remain at #1 for at least another week. On the bright side, this gives Oklahoma State’s starting quarterback Spencer Sanders another week to rest his injury. I am curious to see what Mike Gundy does once Sanders is back considering Shane Illingworth has been playing well in Sanders absence. No matter who is in at QB for the Pokes, a player to watch for is wide receiver Tylan Wallace, dude is a beast. Wallace currently ranks 20th in receiving yards and is tied for 17th for receptions per game. In their most recent game against Kansas, Wallace went off for 9 receptions, 148 yards, and 2 touchdowns. Oklahoma State’s defense has been playing at an exceptional level as well this year. If the Cowboys want to make it to the conference championship, their defense will be one of the keys.

All eyes will be on West Virginia and Kansas this Saturday being they are the only Big 12 game schedule to be played.