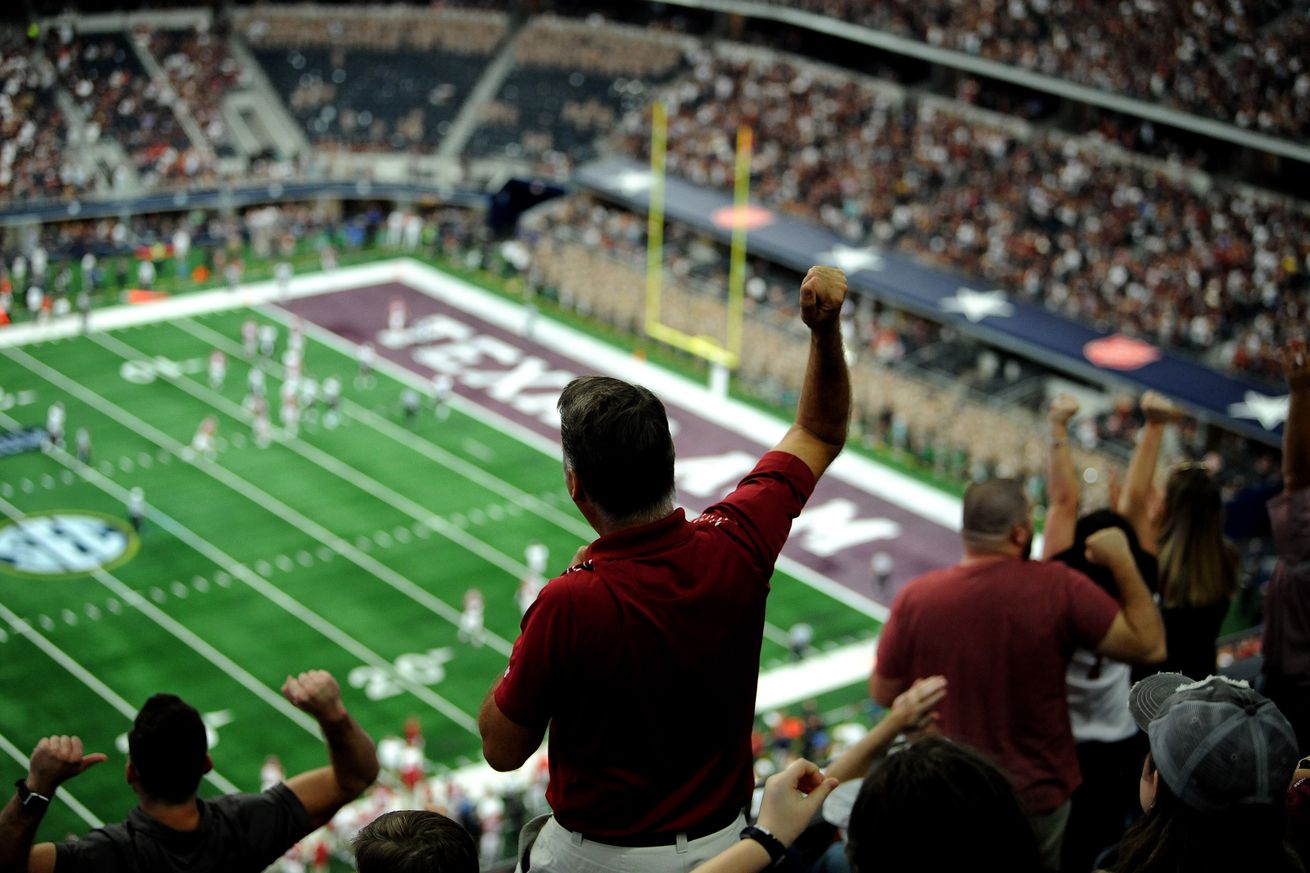 A wild week in college football had things worth seeing on and off the field.

Week Five in college football is in the books, but the biggest news this week came from off the field, where California has passed a law allowing college athletes to earn money from their likenesses.

Entire books could (and probably will) be written about the effect this will have on college football and amateurism as a whole. I am not smart enough to write those books, or even an article about it.

No, this series is for celebrating the things that don’t matter at all, but still bring us joy and mirth each week. Let’s get this party started!

Did Y’all See: The Rivalry Nobody Likes?

Texas A&M and Arkansas are locked into a rivalry that is played at AT&T Stadium each year. The Aggies are probably the most Dallas Cowboys team in the country — a massive money-making machine that hasn’t won anything of importance since Clinton was in office and has fans that are perpetually unhappy with coaches.

This rivalry does nothing for Texas A&M. Beating Arkansas means mostly nothing, because Arkansas hasn’t been good for a while. Losing to Arkansas would be a disaster. And the game is played on a neutral field, so they can’t get any of that sweet, sweet Kyle Field ticket sale money.

While A&M won, the Aggies tried their best to lose. Arkansas had the ball with a chance to win in the fourth quarter but couldn’t score in the waning minutes. Did the folks at TexAgs enjoy the game? See for yourself!

And perhaps the most jarring thread I’ve ever seen, one I couldn’t even bring myself to read:

Oklahoma and Texas will play in the Cotton Bowl two weeks from now. Apparently, the Sooners are already preparing for the game — just not an any way that makes sense.

According to the OU Daily, the Sooners’ Spirit Squad has been warned not to flash the “Horns Down” at Texas for fear of a personal foul penalty against Oklahoma.

OU spirit squad members have been “heavily encouraged” not to perform the “horns down” hand sign at athletic events or on any social media platform, sources within the program have told The Daily…According to the sources, on several occasions, including at a meeting in August 2018, O’Neill told the students they were not allowed to use the hand symbol. O’Neill informed them that any use of the hand symbol on social media would be asked to be removed. Several sources told The Daily they have been asked to delete posts with horns down in them over the past two years.

The Big 12 has flagged teams for showing the Horns Down against Texas before. This takes it to a whole new level — now even the spirit squad isn’t allowed to do it!

I have a lot of jokes I can make here, but will refrain from doing so in order to remain employable.

Did Y’all See: The Floating Wendy’s?

There is perhaps no greater example of the shining freedom and liberty this country exemplifies than the floating Wendy’s outside Husky Stadium in Washington.

Feast your eyes on the glory:

There’s a floating @Wendys outside Husky Stadium in Seattle

Imagine sail-gating on your boat, crushing a Coors Light Silver Bullet (or some ghastly bitter West Coast IPA), then swimming over to the Wendy’s to pound a Baconator. How heavy must that be in your stomach when swimming back over? If the rule is “wait 30 minutes after eating to swim,” it has to be “wait 48 hours to swim after eating a Baconator, and then consult your doctor.”

Did Y’all See: That Guy Get Hit In The Face With A Cannon?

Deadspin has a very funny write-up of this, but basically — a referee got hit in the face with a cannon in Maine. That’s it, that’s the story. You can see the video here:

Now, luckily, the ref is okay. It wasn’t a cannonball that hit him, just some homemade, jerry-rigged explosives. But I don’t think the Maine Maritime Academy is going to be firing at the broadside of any teams very soon.

Did Y’all See: We Almost Had An FAU “Hard Knocks?”

Hard Knocks, the long-running HBO series profiling an NFL team during training camp, can be hit or miss. Sometimes we get that one Cleveland Browns assistant coach; other times we get Jon Gruden pounding on a podium and pretending Antonio Brown doesn’t exist.

But put Hard Knocks in an FBS program, and we’d be cooking with gasoline. And if you add Lane Kiffin to the mix, there’s no telling what could happen. Apparently, we nearly got that very scenario. According to Bleacher Report, Kiffin turned down an offer for a show chronicling FAU.

Think about what we’ve missed out on! I’d watch Kiffin go grocery shopping and doing laundry if they put it on TV. Getting that man in front of a camera is an absolute electric factory, and we’re all worse off for this show not existing. Of course it’s the right decision for him — inviting that kind of media attention can only hurt a program — but who cares about what’s good for the Owls? We want content, dadgum it.