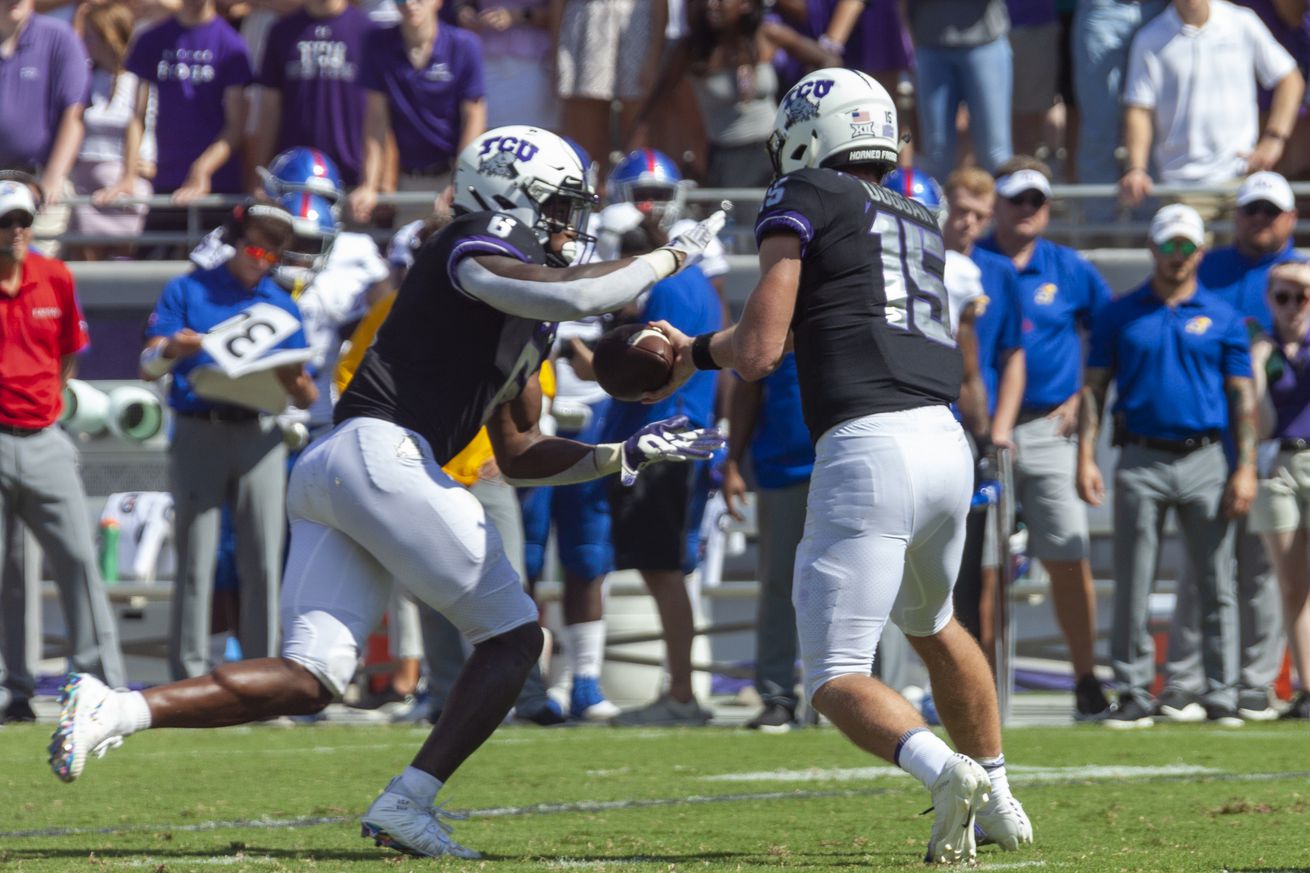 Max Duggan has figured out the winning formula – give DA the ball. | Melissa Triebwasser

The senior running back has turned a corner, and is taking the TCU offense with him.

“I came into the season knowing that I feel faster, stronger — knowing I can do more.”

Darius Anderson was once a promising young freshman running back, a three star prospect out of George Ranch High School who counted Alabama amongst his 19 offers. The 5’11” back burst onto the scene against Texas back in 2016, scoring his first career touchdown on a 70 yard run against the Longhorns and averaging 8.5 yards per carry on his 27 attempts.

As a sophomore, he looked primed to be the feature back, earning honorable All-Big 12 honors despite starting just three games and being injured against Oklahoma. His 160 yard, three touchdown game against Oklahoma State showed what he was capable of, and had he stayed healthy in 2017 and 2018, would have easily surpassed the 1,000 yard mark in both seasons.

Saturday, against Kansas, the now-senior surpassed the 2,000 yard mark in his career, something that many expected to happen much sooner. But after the trials and tribulations Anderson has faced and overcome, it was likely even sweeter because of the wait. But the man they call Jet was deferential when asked about the achievement, saying “it feels great, but getting a Big 12 championship will feel even better.”

That might be the biggest difference in Jet in 2019 — still confident, he’s taken on more of a leadership role, deferring praise “I give all the credit to the offensive line, opening holes like I’ve never seen before” and talking up the guys that will fill his shoes next season — “it was so fun, so exciting. I see what they do every day, how they’re willing to learn and work. Some of the hardest working players I’ve ever seen, so it was great seeing them do that. So fun.” Anderson has come into 2019 season with a different appreciation for playing football, one likely born of fighting through various injuries each of the last two. His off-season work ethic has been showcased through the first four games of TCU’s slate, as his focus on cutting weight and putting on muscle has paid dividends in his ability to hit the hole more quickly, cut on a dime, and carrying tacklers down the field for extra yardage on nearly every snap.

Anderson had one 100 yard game as a freshman, two as a sophomore (though he went for 99 against Texas, 95 at Iowa State, and 89 verses SMU), and just once last season (with 95 in the lass at Kansas). This year, his last at TCU, Jet has gone off for three straight 100+ yard games in a row (after getting just six carries in the opener against UAPB). Prior to this September, he had never posted consecutive games over the century mark. The best part about it? He’s racking up the yardage on just 17.5 carries per game, averaging 8.2 per, sharing the load with Sewo Olonilua, Emari Demercado (who exited Saturday’s game with an undisclosed injury) and a duo of talented freshmen in Darwin Barlow and Daimarqua Foster. Watching DA work, while keeping him fresh? That’s a winning formula for TCU.

The Frogs have relied heavily on the run game in 2019, something that’s unlikely to change if they want to win. With true freshman quarterback Max Duggan still learning what it takes to win at the collegiate level and Alex Delton a work in progress in the passing game — not to mention the cluster behind them both — and an offensive line that is really big, really veteran, and really good… why not put the rock in the hands of a talented senior like DA? TCU’s rush offense is averaging 275 yards per game and 5.6 yards per rush, the former more than 50 yards more than their passing output weekly. Now, three of the Frogs’ games have been blowout wins, skewing the statistics some, but they’re still in the top 15 in the country in both rushing yardage per game and yards per attempt. It’s a formula that’s working (at least when TCU is winning) and there’s no reason to get away from that in the moment. Anderson’s individual marks are top ten worthy as well, by the way.

There is a lot more that needs to be done to ensure the Frogs can contend in the Big 12 — the work has truly just begun. But putting the offense on the shoulders of a healthy Darius Anderson is a heck of a way to start.

Jet put in the work this off-season, and he’s seeing it pay off through the year’s first month. Now he’s going to try and carry them to the Big 12 title game.