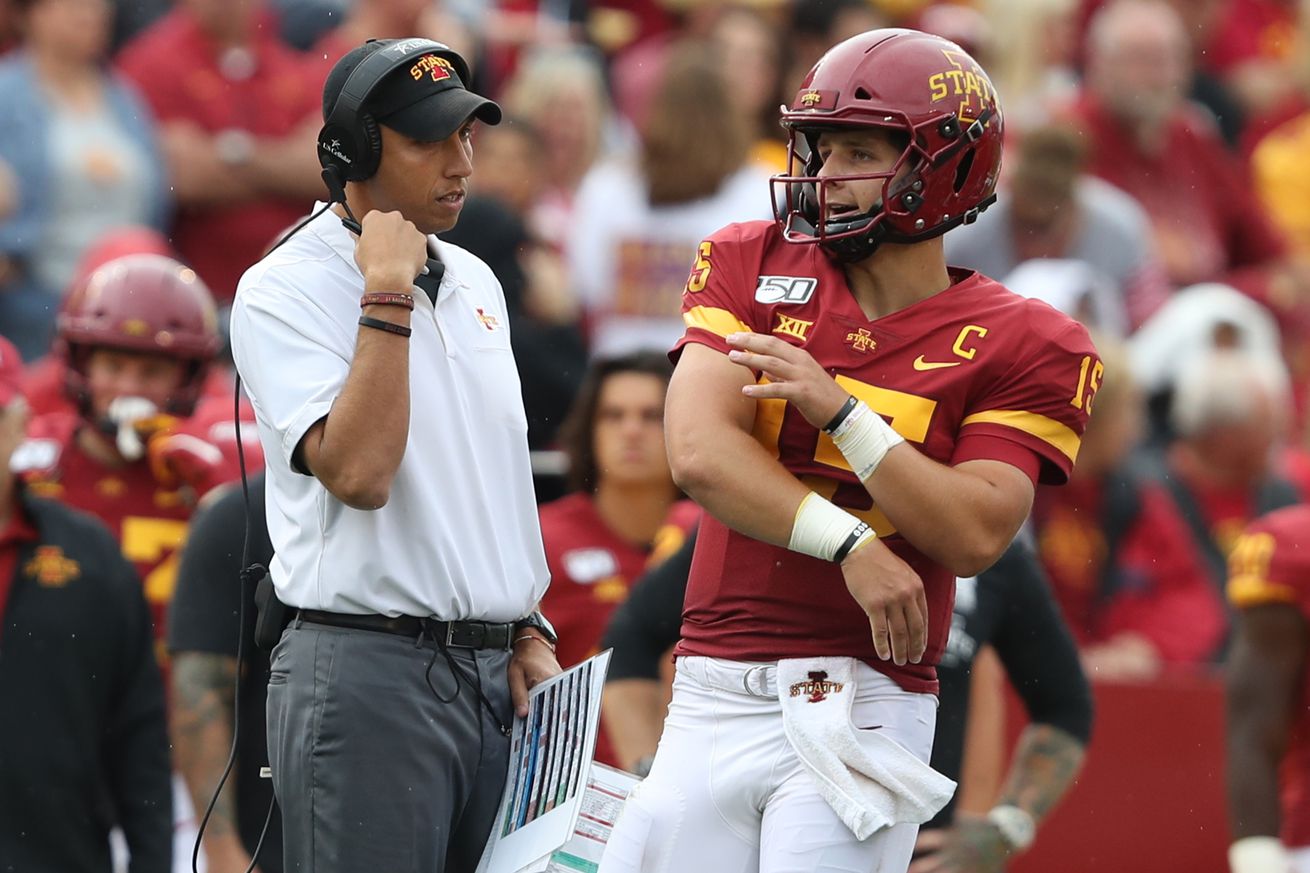 Jared Larson, of your second favorite Big 12 blog, was kind enough to answer a few questions for us ahead of Saturday.

The weather is expected to be sub-optimal Saturday, setting up a mud fight of a football game between the 2-2 Cyclones and the 4-1 Horned Frogs. Iowa State is angry after a slow start led to a last second loss at Baylor, while TCU Football is hoping to be back on track after bouncing Kansas in their Big 12 opener.

In order to get a read on what we can expect from Matt Campbell’s squad, we reached out to Jared Larson of Wide Right Natty Lite to get the inside scoop.

Melissa Triebwasser: Iowa State came into the season with a ton of hype, but things haven’t gone exactly as planned so far. Is there cause for concern in Ames, or do you think this is just the growing pains of a young team?

Wide Right Natty Lite: I think the reality of most of those concerns have come from our two losses this year being just three points total. While it could truly be the mark of a new team trying to form chemistry, I think getting back to basics in front of a raucous Iowa State crowd (59,000 total people are coming can help us.

MT: Brock Purdy has put up big numbers in his sophomore season. What has his progression been over the last year and what makes him so special?

WRNL: Brock has had the benefit of having quite good receivers who he’s had success with in the past (Kolar, Milton and Jones) as well as the ability to make the line to gain on his feet if he needs to. (he’s thrown for 1331 yards so far this season?) His character and playmaking ability will keep Iowa State in games if it needs to become a shootout.

MT: The Cyclones’ running game took a huge step back with the loss of David Montgomery, which is to be expected. But it’s still surprising to see your QB be leading almost every major rushing category. What happened, and how does it get fixed?

WRNL: Yeah for sure. So what’s been happening is the running backs we’ve been cycling through (Sheldon Croney Jr., Johnnie Lang, Breece Hall, Kene Nwangwu..) None have really had that elite capability that we saw with David. Johnnie Lang is probably the clubhouse favorite going into Saturday.

MT: This ISU defense is salty as hell. What do they do so well and who makes it tick?

WRNL: Takes one to know one! They usually lock down more and more throughout a game, but our 3 down linemen look that we’ve been showing for the last while might have another member this week. I’m not sure if it will, but, what I do know is players like Greg Eisworth II, O’Rien Vance and Ray Lima will provide the most impact.

MT: The last two games these two teams have played have been pretty ugly, and with rainy weather expected Saturday, it’s likely not to be much different this go around. What kind of game do you expect in Ames, and who does that style benefit?

WRNL: Darius Anderson (120.75 rushing yards per game I think?) concerns me, but maybe, just maybe Iowa State can hold him in check. Also, it looks like it might be dry by the second half. I study journalism and sociology, so don’t chirp me if I’m wrong. I do think the weather will benefit Iowa State because it’s been NOT IDEAL every home game.

MT: Which players will TCU fans be hearing a lot of on both sides of the ball for the Cyclones Saturday?

WRNL: You’ll absolutely hear about monsterman Ray Lima on defense (just watch for #58, he should cause some disruptions). Offensively, Tarique Milton (1) is an absolute speedster. But if he’s unavailable, rely on Deshaunte Jones (8)

MT: For Frog fans attending the game, what should they be paying attention to and what are some must-see things around Ames?

WRNL: Frog fans coming to my hometown this weekend, please find a spot to legally park. Mayor Haila in February of this year passed Ordinance #4379. Before 4379, one could illegally park around the stadium for cheaper than legal parking, but that’s no longer the case.

As for the sights and bites of Ames, I really like Stomping Grounds. It’s very much like a French café with their crêpes are elite. Also our Main Street Historic District has cool places, such as Octagon (Art place), Wheatsfield (Organic food) and Welch Avenue if you’re looking to drink with a more student based crowd.

One last food spot, Rico’s Tacos, a truck located on East Lincoln Way, has by far the best tacos in Ames. Book it. (editor’s note: awfully brave to suggest tacos in Iowa to a bunch of Texans)

MT: What’s your prediction for the game? Who wins, how, and who are the MVPs?

WRNL: Honestly, it’s going to be an absolute slugfest. The total for this game is a 45? I don’t see it. With how rainy Ames has been, and how cool it might be (would you like some ice fishing tents wait never mind no tents allowed).. If JaQuan Bailey is able to play, Iowa State wins by 5, if he doesn’t Iowa State wins by 2. How do I figure? It took me three tries to pass stat, so, thin air grabbing mostly. A deep shot late in the game, Purdy -> Jones -> Milton for the final TD.