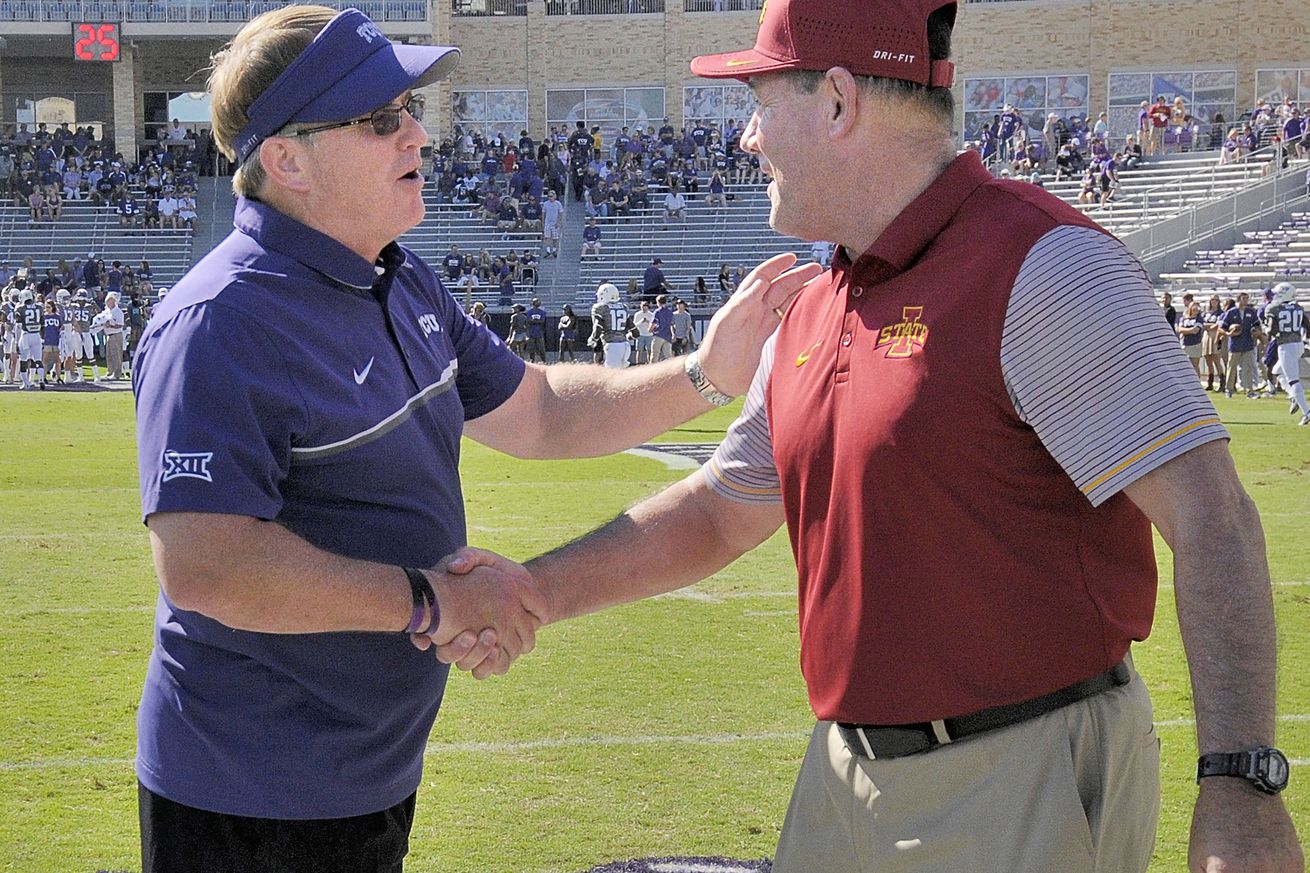 If you’re not going to make it to Ames, here is how you can follow the Frogs.

TCU Football travels to Ames, Iowa this weekend for a pivotal early-conference matchup with the Iowa State Cyclones. ISU is looking to even their Big 12 record at 1-1 while the Horned Frogs are looking to get to 2-0 in the league on the season.

If you can’t make it to Ames, here’s how you can watch – and what you need to know about the series.

– TCU makes its first Big 12 road trip of the season when it travels to Ames for a Saturday 11 a.m. contest at Iowa State.

– The last two meetings between TCU and Iowa State have been decided by a total of 10 points with the home team winning each contest. The Horned Frogs won 17-14 in Fort Worth last season, while the Cyclones took a 14-7 decision in Ames in 2017.

– Dating back to last year, TCU has won six of its last seven games and seven of the past nine.- TCU has opened its season with a record of 3-1 or better for the 14th time in 19 seasons under head coach Gary Patterson. The Horned Frogs are looking to go at least 4-1 in the opening five games for the 11th time in the Patterson era.

– Patterson is 6-2 as a head coach versus Iowa State. Seven of the eight meetings have come since TCU began Big 12 play in 2012. The Horned Frogs, under Patterson and a member of the Mountain West Conference at the time, defeated Iowa State 27-24 in the 2005 Houston Bowl.

– Nine of TCU’s last 21 Big 12 road games have been decided by seven points or less. The Horned Frogs are 6-3 in those games.

– TCU and Iowa State will be meeting for just the 11th time in their history.

– Iowa State took a 37-23 victory in 2012 in the Horned Frogs’ first-ever Big 12 home game. It snapped a 12-game TCU winning streak that was the longest in the nation at the time.

– TCU true freshman starting quarterback Max Duggan is a native of Council Bluffs, Iowa. He played at Lewis Central High School and was the 2018 Iowa Gatorade Player of the Year.

– TCU head coach Gary Patterson’s first game on the Horned Frogs’ sideline was a 31-21 victory at Iowa State in the 1998 season opener. Patterson was TCU’s defensive coordinator at the time.

– TCU is one of just six programs nationally to finish in the top 10 of the final polls at least three times (2014, 2015, 2017) in the last five seasons. The others are Alabama, Clemson, Georgia, Ohio State and Oklahoma.

– TCU has five 11-win seasons this decade, equaling the combined number of the 11 other FBS programs in the state.