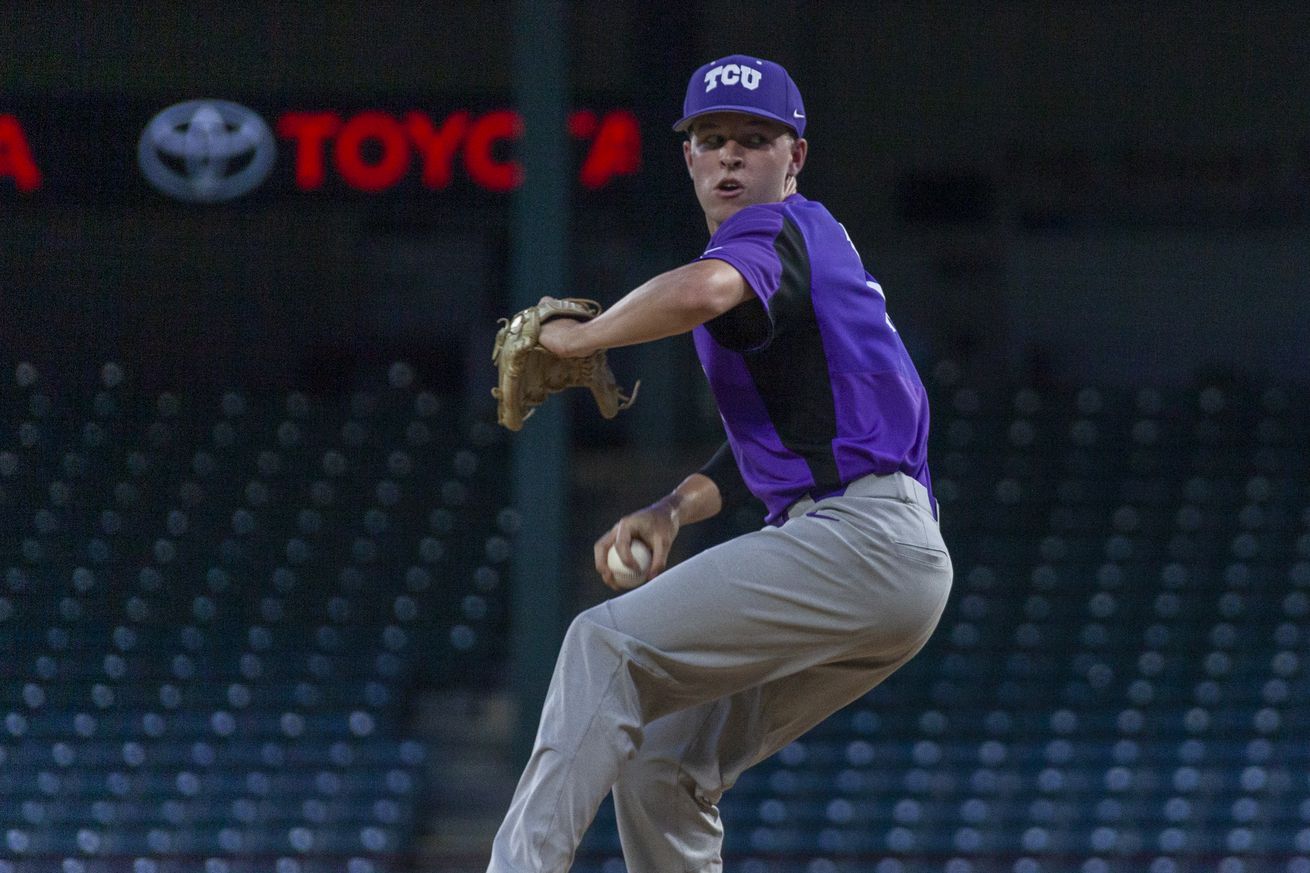 The true freshman out of Burleson is just one of a bunch of talented arms that found their way to Fort Worth.

When TCU Baseball has been at their very best, it’s been the pitching staff that has carried them. From the first College World Series team back in 2010 – headlined by Matt Purke and Kyle Winkler, to the four straight appearances in Omaha spurned on by Tyler Alexander, Alex Young, Preston Morrison, Riley Ferrell, Brandon Finnegan… you get the point.

Back to back disappointing (by our insanely high standards, at least) seasons have been marred by inconsistent pitching – though guys like Durbin Feltman, Nick Lodolo, and Jared Janczak did all they could, injuries and inconsistency left the Frogs on the outside looking in by the time June rolled around.

Jim Schlossnagle and Kirk Saarloos have done an excellent job recruiting top talent to TCU, but getting them to campus can be a dicey proposition. Young arms are especially prized by MLB teams, who will tempt high school pitchers with multi-million dollar deals that are especially hard to turn down at 18 years old. Well, that tide may be turning as the 2020 season approaches, with highly-sought freshmen Jacob Meador and Riley Cornelio, as well as a pair of drafted juco players in Drew Hill and Johnny Ray joining ten other new to TCU pitchers on the Horned Frogs’ roster. The arms, along with a plethora of talented position players, make up the #4 rated class in the country and best in the Big 12 – both firsts for Schloss’ program.

The highest-ever ranked recruiting class hit campus this fall! @BaseballAmerica tabbed the 2019 class No. 4 in the nation and tops in the Big 12! #GoFrogs pic.twitter.com/yg30yCESXY

The only high school player lost to the draft was pitcher Quinn Priester, and that was the biggest difference-maker for the Horned Frogs in 2019.

Meador was the first freshman to take the mound for TCU Tuesday night, and the local kid made the most of his opportunity – setting the side down in order twice and ending each of his two innings pitched with a strikeout. The youngster looked like he was in control all night, something Schloss echoed. “Yeah he was, and he wasn’t the only one. Jacob did a really nice job, it’s awesome for him to be in his hometown. I think he’s probably pitched in this ballpark, maybe in some showcases or something, but yeah you can see how special he has a chance to be.” The person with perhaps the best view all night, senior catcher Zach Humphreys, liked what he saw as well. “I love sitting back there catching guys who are throwing strikes, and he was filling up the zone with all three of his pitches – fastball, curveball, and changeup.” It wasn’t just what he threw, though, that impressed: it was how he handled himself as well. “It’s really good, especially for a freshman – and especially because he’s from the area so he probably had a ton of family here – so him being able to calm himself down and fill it up… even if he got himself into a situation I think he finished both innings with a strikeout, so good for him.”

Though it’s fall ball, playing in a big league stadium against major league players certainly changes the feelings around the game, making it feel higher-stakes that your typical scrimmage. And that’s why the performance of the eight different guys that took the mound – six for the first time as Frogs – was so special to Schloss. “Here’s what I was super excited about – how our guys handled themselves on the mound. I don’t think anybody got out of their element, they stayed in control, threw strikes.” That was different than what he had seen through the first week of practice. “In our first couple intrasquad scrimmages, guys were overthrowing – they were throwing harder than they were tonight but they weren’t throwing many strikes. So I challenged them in practice and told them ‘that’s what I want to see the most of – be in control of yourself so you can be in control of your performance.’” Huimphrey noticed as well, and appreciated that they made his job easier. “I was very impressed with our pitching staff especially. This situation gets your nerves going, your adrenaline pumping, but they were cool, calm, and collected – threw a ton of strikes which is really good for us going forward in the fall. I was really proud of our guys.”

Meador is a local kid, a top ten player in the state, a kid who could have gone in the early rounds of the draft this spring. But he made it clear that he intended to enroll at TCU, and there was little that could be done to sway him from something he had literally been dreaming about for years. “There was a very slim chance, but I was pretty much set on coming to TCU and pitching for coach Saarloos and coach Schloss. Since my freshman year, it’s what I’ve been looking forward to.” As a senior, the Burleson Centennial star went 10-1 with 162 strikeouts against 24 hits and seven earned runs allowed in 77 innings pitched for a 0.63 ERA with a 0.61 WHIP. He was drafted in the 31st round by the Mariners, but was taking calls from teams much earlier in the process. Getting him to Fort Worth is a boon for a TCU program that has plans to get back to Omaha, and seemingly has the talent to do so.

They’ll have to do it on the strength of a pitching staff that will need some time to adjust to this level of play. For his part, Hump is ready to help shorten that period. “From high school to college, it’s a big jump and so, the quicker we can shorten that gap and adjustment, the better we are going to be.” His willingness to help, along with the other veteran players, has not gone unnoticed by guys like Meador. “These older guys, them taking all of us under their wing, getting us acclimated to what we are doing, everybody is gelling as a team.” That gelling is setting them up for success, too. “IWe hang out all the time when we’re not practicing, that’s awesome, building team chemistry. I think we have a great year ahead of us.”

The Frogs open their season at home against Kentucky on Friday February 14th. They’ll play a scrimmage against Texas State on Sunday, October 27th first. That event is free and open to the public.