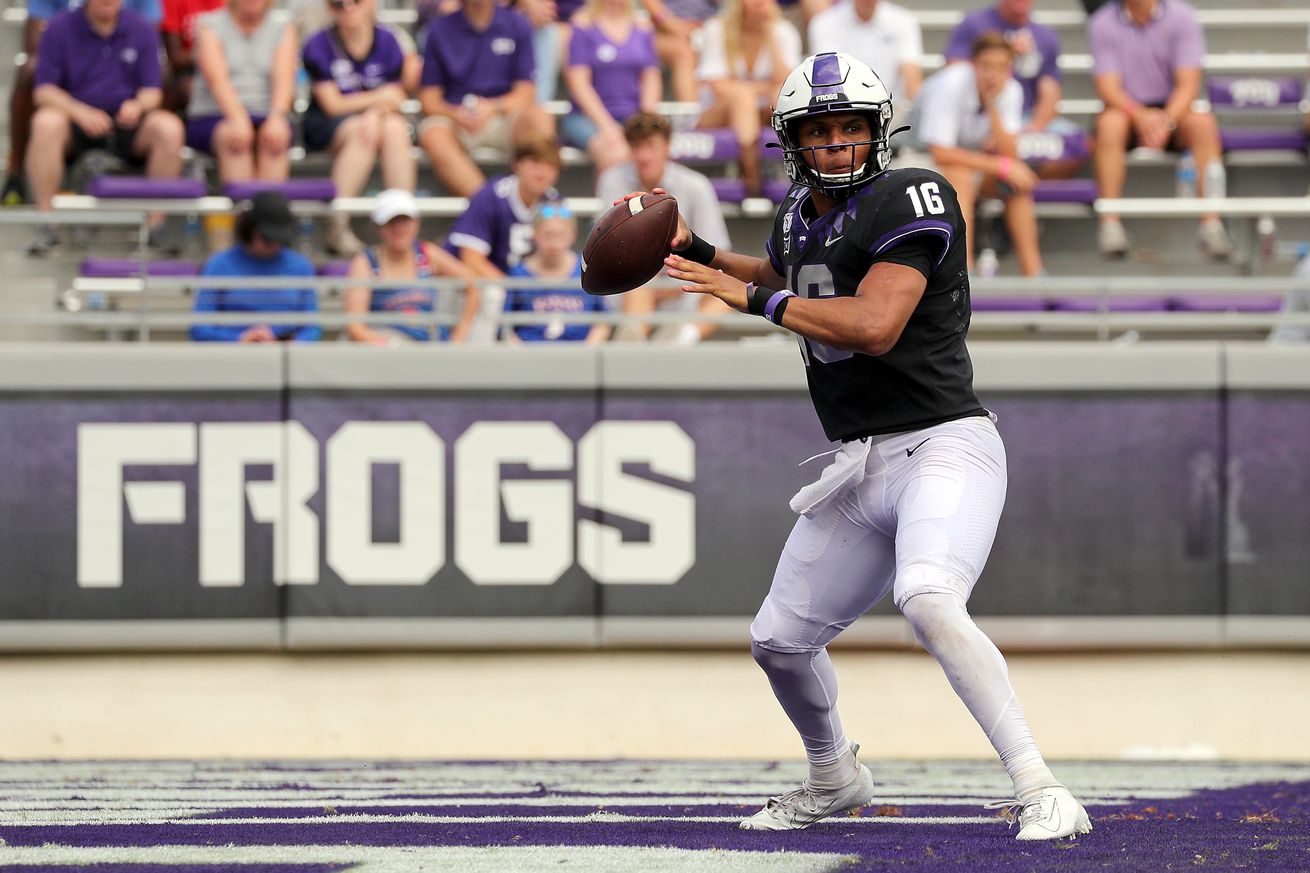 The Frogs bounce back big against a conference opponent and got some revenge along the way.

Hot diggity daffodil, the Frogs beat Kansas by a convincing amount. It was only the second time in our 7 years in the conference that we blew out the Jayhawks, and hopefully it will be the spark that ignites the Frogs ability to consistently play at a higher level. After a really odd week from Patterson – weird in terms of comments/decisions made during the post game press conference after last week’s loss – this was very encouraging to see.

Let’s jump into the good.

This begs the question, if we didn’t screw the pooch in all 3 of those above areas against SMU how much does that affect the final outcome of that game? I’m not really sure, but what I will say is this. Cumbie stock is back on the rise (STONKS ARE UP) and too be frank, he had a lot to prove this week, and to me he showed that he can come up big when he’s under the gun. I know it was KU, but still we have struggled against them in the past, no reason to get down on this performance.

I hope that both Cumbie and Duggan learned a lot from this game, what plays work, which ones the QB doesn’t like as much, which small plays can bait the defense and set us up for those big down field pays. The quicker we get a true freshman QB comfortable in a game, the better he is likely to play…which is very important considering we are AT the Iowa State next week.

The Frogs scored 50+ points, their highest of the season, and the game was never in doubt after the 1st quarter. Overall it was a fun game to go to, and it has truly been far too long since we have blown out another Big 12 opponent. Like I said earlier, this could be HUGE for the Frogs if it means this is where they begin to put it together and start playing smart more often than not.

Darius Anderson: This man goes to the vet. You know why? Because he is an ANIMAL. Once again Jet showed that he’s the 1b to Reagor’s 1a in terms of best skill position player on the team. He finished his day with 18 carries for 115 yards and a touchdown, and continues to average over 6 yards a carry this season. No matter who we are playing, number 6 always seems to know how to make plays and find the end zone once we start feeding him.

You know it’s funny, I read the stat sheet, and after having a conversation with a couple of people since the season started – he is the only player during my time as a TCU fan that when I see that he has 18 carries I still think to myself “That’s not enough”.

See our post earlier in the week to read more about Darius Anderson and his potential this season.

The Offensive Line: Once again, when the game was still a competition, the big boys up front gave Duggan all the time that he needed back in the pocket. Letting him make good decisions and while I wish he would get rid of the ball quicker, this offensive line will at least give him some wiggle room to get things figured out. Left tackle Lucas Niang left the game early, however for what reason I am not entirely sure. Let’s hope that it is not anything serious and was just precautionary.

The Defense: Overall the Frog defense was frustrating the Kansas offense and didn’t let the Jayhawks get on the board until very late in garbage time. While the defense did not force any turnovers on the day, they did force Kansas to go 3 and out a total of 7 times. It doesn’t matter who you are playing, if your team can force the other team to punt away the ball in that fashion, that many times then you stand a good chance to win the game.

Have to give Ross Blacklock a special shout out who had 2.5 sacks on the day, leading the team, and once again being an absolute road block/wrecking ball up the middle.

Jonathan Song, perfect kicking percentage is no more: All good things must come to and end, and Jonathan Song finally missed his first FG of the year. Overall I’ve been very impressed by Song this year, and if you were to tell me that we’d go 9 FG attempts without our first miss of the year I would be more than okay with that. Especially compared to how shaky that aspect of the team was last year. This is technically a good thing, even though I have it listed under bad, but hey the streak had to come to an end at some point.

Jalen Reagor only having one reception on the day: On top of Reagor only having one catch this year, this is also a combination of our lack of getting him the ball this entire season so far. We are giving him other opportunities to touch the ball, with punt returns and wildcat formations, but still it’s not like he’s covered the entire game. I totally understand that he gets doubled and blanketed but that does not mean that he isn’t open. The man is like waffle house, always open. I want to see us get Reagor the ball on a regular basis. I’m just waiting to see him have his 12 catch game for 100+ yards and a touchdown.

It’s probably a combination of defenses knowing he’s our best skill position player and we have two QB’s that seemingly can’t get him the ball (that doesn’t mean that they are bad, but they seem to overthrow him when he is wide open). We can all agree that it isn’t an ability thing with Reagor, I don’t think he has fallen off or gotten worse in anyway. Most of all…I just miss watching him make plays with the ball in his hand.

We played three quarterbacks in this past game, which is the highest amount that we have played all season long. Max Duggan, Alex Delton, and Michael Collins all took snaps on Saturday and all 3 led scoring drives. Duggan looked way more comfortable in the pocket and didn’t look like he was forcing too many things, Delton threw some of the best passes of his career, and Collins got some redemption by scoring a running play against the Jayhawks (I guess the foot is okay after all).

Duggan’s day as the full time starter was done pretty early in the game, since Delton came in as early as the second quarter. However, he was able to throw for 100 yards and two touchdowns before his day was done for real. As a whole, I thought it was a B+ performance, and this was the best he looked all year. Only having 3 incompletions on 11 passes wasn’t bad – but I will say this I was not thrilled about the two touchdown passes. Of course I love it when he throws touchdowns, but that first one was thrown into double coverage and if we are playing against anyone not named Kansas that is probably broken up or worse picked off. His second touchdown pass was so close to being overthrown (but I’m okay with it being a ball that only our guy can get) but Pro Wells went up and brought it down with a very impressive catch. I’m not saying I’m not happy when we make those plays and our WR’s make big time plays on the ball, but what I am saying is that it feels like sitting on a pinecone when those balls are in the air and I see the other team’s defensive backs moving to almost pick off the ball.

Duggan is showing growth and that is ultimately what matters the most. I have a feeling next week in Ames could be tough for him, so I’m hoping our play caller is ready to redeem himself for the last time we played there and has done his homework so that we can come out firing.

As mentioned earlier, Delton was making some of the best throws of his college career in this contest. The one throw that especially stands out to me was the absolute biscuit he dropped in Te’Vailance Hunt’s basket. Even though he is a senior, it’s not totally improbable that the could show improvement as the season goes along in the same way that Duggan is. Not saying that he should be our starter, but heaven forbid another QB injury it looks like we won’t be spamming the panic button like we did last year where there truly was no good answer. I wouldn’t mind seeing Delton get more red zone touches if we can come up with some creative play calls for him.

Play of the Game:

For the first time in this category I’m going to cheat. I couldn’t decide between two of them so I’m going to include them both. Inexcusable I know, but bare with me won’t you?

The first play worth mentioning is “professional big man” Pro Wells and his big daddy touchdown catch. The tight end (oh how glorious it is to see tight ends scoring touchdowns) got all the way up and brought in the ball with one hand for the touchdown. It was the same area of the field that Josh Doctson had his famous one handed grab against Minnesota back in 2014, so if we have to play OT in the Carter I recommend that we start in that end zone.

Pro Wells brings down the 7 yard TD pass from Max Duggan with one hand! #TCU up 14-0 on Kansas! pic.twitter.com/22Ewa4VN11

The other play has to be Jalen Reagor’s rendition of the DeSean Jackson Miracle at the Meadowlands 2, where he fumbled the punt and then used that hesitation from the kick off team to create some space and take the punt ALL THE WAY TO THE HOUSE. Man, I really wish he got the ball more.

Next Week: On the road against Iowa State

Well, this is the game where we find out how good this team really is. The Cyclones just dropped a heartbreaker on the road to Baylor (last second FG to win) and are looking to make sure that they do not fall to 2-3. They are going to be angry and probably looking to take it out on a TCU team that could be good or could be bad. We’ll have to wait and find out.