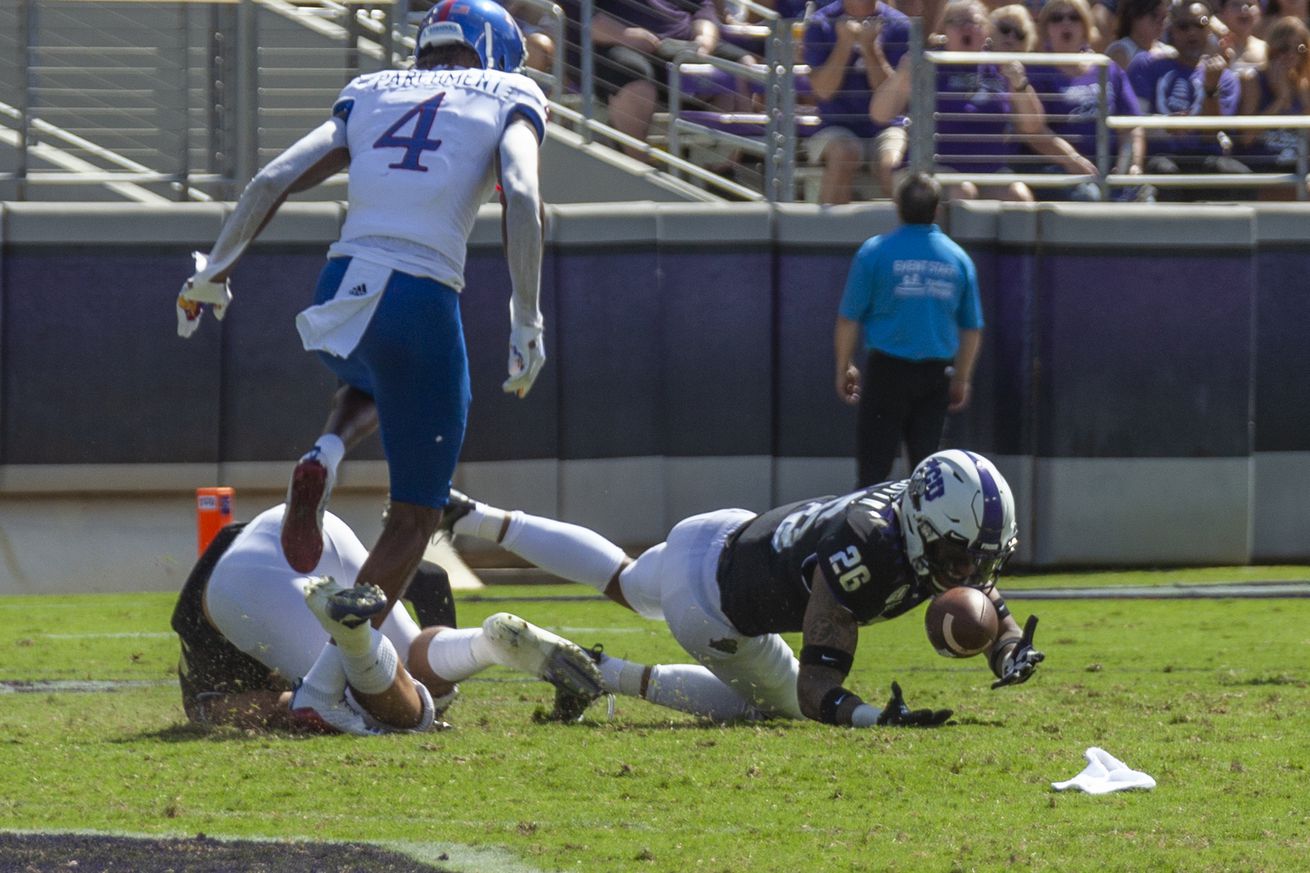 Take a look at this week’s Saturday stars!

The Frogs have struggled mightily with Kansas since joining the Big 12, playing a bunch of close games and losing in Lawrence last year.

BUT, the last two times the Jayhawks have come to the Carter, TCU has managed to roll KU, and Saturday was no exception.

It was a total team effort, but that doesn’t mean we can’t highlight some of Saturday’s super stars.

Vernon Scott was everywhere Saturday afternoon, breaking up three passes and turning last week’s porous secondary back into the unit we expected them to be in 2019.

Safety Trevon Moehrig spoke of Scott’s importance, saying “he’s one of our big leaders in the secondary. He’s vocal and a good player. Having him helped the defense a lot.” Patterson echoed the sentiment, calling the difference Scott makes “incredible. We can go to our dime package, which I wasn’t able to run last week. That’s really where we get into third downs, where we stop people, and we couldn’t go to it a week ago.”

The Frogs have endured a spate of early season injuries to a secondary that has a lot of inexperience in the two deep. Down to their third string corner, Scott made enough of a difference against an improved Kansas offense to help TCU dominate.

The Future’s So Bright We Got To Wear Shades Award:

Yes, we could give Darius Anderson an award this week, and he’s deserving of it. But, considering that I wrote 800 words on him already, let’s talk about the guys behind him instead.

Emari Demercado is quite possibly the most important guy that no one talks about for TCU, as the running back does a little bit of everything for the Horned Frogs. Patterson said as much in fall camp, talking about his versatility, leadership, and unselfishness. Demercado had a few nice runs before leaving the game with an injury, and for TCU’s sake, here’s hoping it’s not serious.

Demercado going down meant that the two true freshmen backs were given a chance to show out, and hoo boy did they. Darwin Barlow saw his first action since week one and made the most of it, accumulating 55 yards on 13 carries and hauling in a reception for 10 more. He also had a nice catch and run into the end zone called back due to a penalty. Daimarqua Foster, the man with the Saquon Barkley tree trunk thighs, finally made his TCU debut, and it was everything we hoped it would be. He ran over, through, and by would be tacklers to the tune of 66 yards on just eight carries with a score. He broke free for a 22 yard scamper that gave me palpitations.

The Frogs are fortunate to have two incredibly gifted senior backs in Anderson and Sewo Olonilua, so we likely will not see a ton of the two true freshmen in 2019. But we know we are in good hands for 2020.

We have a tight end, and he’s a Pro award:

TCU is using a tight end.

Let that sink in for a minute. You have to go back to a good long way to find a tight end that made an impact for the Horned Frogs in the passing game, yet, here we are in 2019 – and two different tight ends had catches in a ball game.

Pro Wells certainly looks like he’s going to live up to his name; the GIANT HUMAN MAN had three catches Saturday, including a beautiful one hander over a defender in the corner of the end zone for a touchdown. That makes two straight weeks that they’ve found a way to take advantage of the 6’4” Wells in the red zone. I mean look at this:

TCU’s Pro Wells has a name fit for Sundays and he makes catches that’ll get Pro to the Pros. KU trails 14-0 on the road. #KUfball pic.twitter.com/hiEDHJq65U

This is a very good development for the TCU offense, to say the least.

I’m not sure if Sonny Cumbie reads many tweets, but either he was paying attention to social media or Gary Patterson got in his ear. Frog fans far and wide celebrated TCU’s opening drive Saturday morning, as the slow-starting Frogs opened with the ground and pound to set up a beautiful pass to the end zone for the first first drive score of the season.

Cumbie’s play-calling has been (rightfully) called into question over the last several seasons, but he called a near-perfect game Saturday, using the run, attacking with the pass, and showcasing a balanced attack that befuddled Kansas. He put his players in a position to succeed, something we have been asking for all season long.

Which players do you think deserve a shoutout? Let us know in the comments!