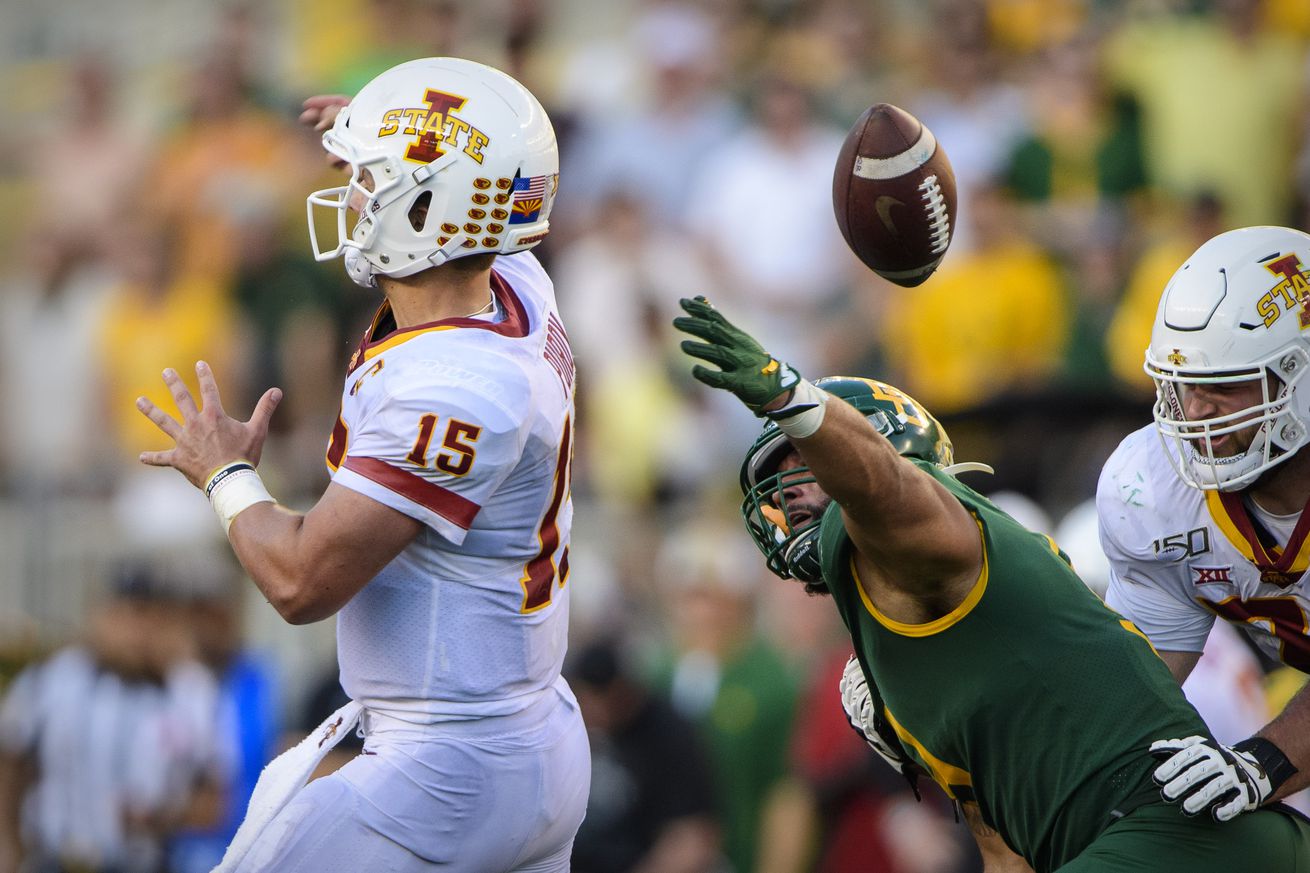 The Cyclones were a dark horse contender in the Big 12 at the start of the season. Now, things are different.

If it’s not well known at this point, you should know this before you know anything else: I have a top three when it comes to Big 12 teams insofar as who I like and appreciate it when they play well.

TCU is at the top, by miles and miles, of course.

Next, basically in a tie, are West Virginia and Iowa State. I think my fondness for WVU is because we joined the Big 12 at the same time, and there’s something about being in realignment limbo that brings fanbases together.

I, along with most people who had been plugged in to the Big 12 the last few seasons, projected Iowa State to finish near the top of the conference standings this season. That could very well still happen, but there are quite a few more questions five games into the season, with the Cyclones sitting at 2-2.

Wins: vs. Northern Iowa, vs. Louisiana-Monroe

Losses: vs. Iowa, @ Baylor (both in spirit crushing fashion)

Losing an NFL starting caliber running back will hurt a team, but I think I underestimated how much Iowa State’s run game would decline once David Montgomery walked out the door.

In 2018, Montgomery ran for over 1,200 yards at a clip of 4.7 yards/carry, and 13 touchdowns. So far this season, the three main rushers for Iowa State (not including their QB), have run for 317 yards and two touchdowns. In the last two games, versus Iowa and Baylor, Kene Nwanghwu, Johnnie Lang, and Sheldon Croney have combined for 23 carries for 120 yards and a touchdown. The three backs combined for just 15 carries against Baylor.

Of course, the running back by committee situation is boosted by a mobile QB in Brock Purdy, and Purdy has looked decent on the ground early in 2019. He leads the team with three rushing touchdowns, but teams are clearly much more aware of his mobility this season.

Either way, Iowa State’s run game has taken a step back, which is normal when you lose someone like Montgomery.

In the passing game Purdy is armed with a few different weapons, most notably Deshaunte Jones and Charlie Kolar. Jones is a speedy receiver who can turn nothing into something, while Kolar is the massive, consistently open target that has become a staple of Iowa State’s offense.

Supported by Arkansas transfer La’Michael Pettway and Tarique Milton, the Frogs’ secondary will face a tough test on Saturday morning.

Iowa State’s defense has been one of the best in the conference over the past several seasons. So far this year the Cyclones are 3rd in the Big 12 in rush defense (115 ypg), fifth in scoring defense (21.6 points per game), and fifth in total defense (352.8 yards per game). Not quite up to typical Iowa State standards, but still pretty good.

The passing defense has left something to be desired, though. They currently rank ninth in the Big 12, and against Baylor they allowed Charlie Brewer to throw for 307 yards and three touchdowns. While TCU’s passing offense hasn’t gotten up to speed yet this season, knowing that Iowa State could be challenged through the air could influence TCU’s game plan.

The reality though, is that TCU has one of the best running backs in the country, and this will be a “good on good” matchup as the Frogs challenge Iowa State’s stout run defense.

Thank goodness this isn’t a night game, because night games in Ames are wild and weird and normally end up being bad for the away team.

With the weather looking to be in the 50s and rainy, expect an ugly game. With TCU’s defense and running prowess, I like the Frogs’ chances in a low-scoring affair.