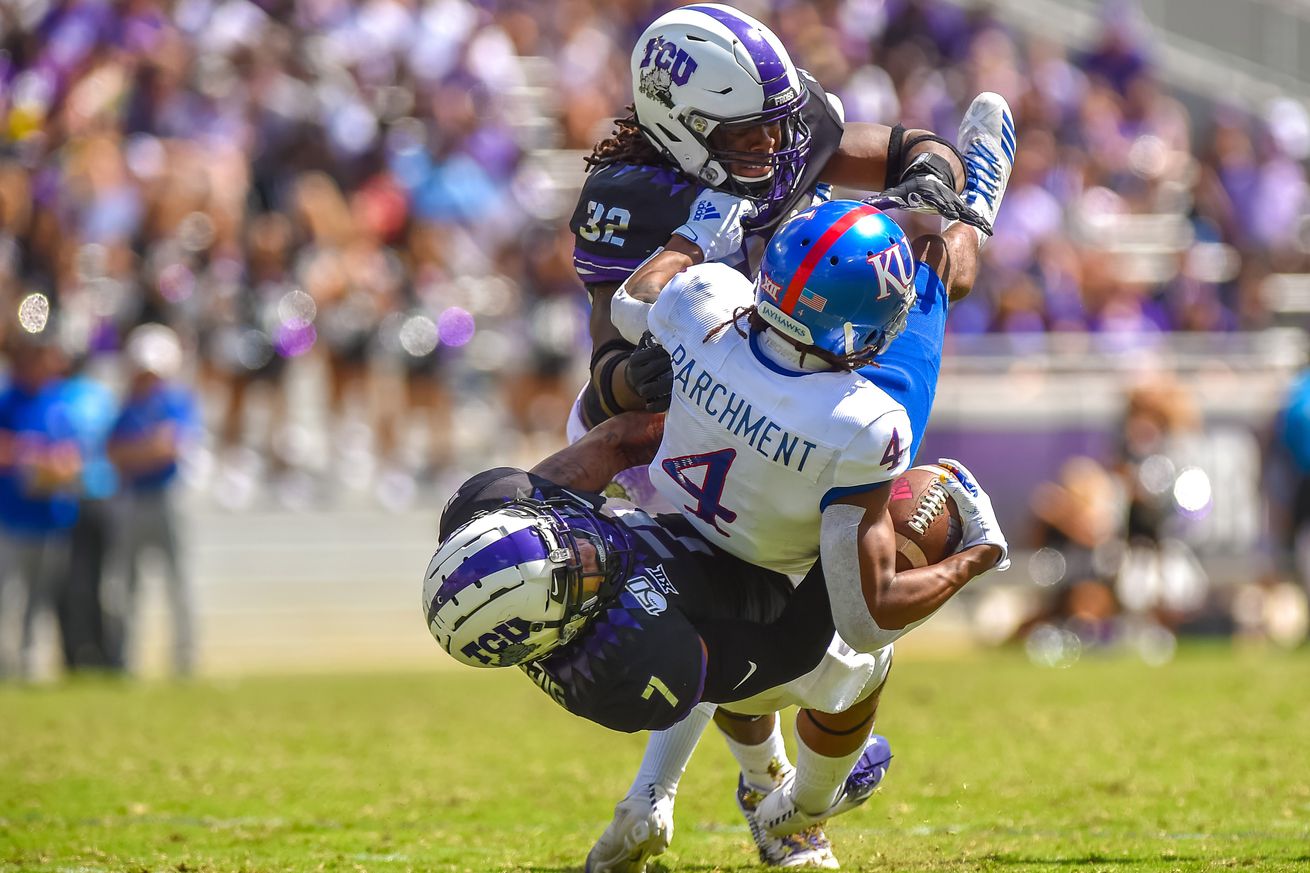 On Saturday morning, the TCU Horned Frogs face the Iowa State Cyclones in Ames. TCU heads back to Ames leading the series 5-2 since the Frogs joined the Big 12. Iowa State has beaten TCU once in Fort Worth, under Paul Rhodes, and once in Ames, as part of Matt Campbell’s breakout season. The two programs have been historically similar in terms of team quality, and despite a gulf in the late 2000s to present, Iowa State has slowly been on the rise, finishing nearly identical to TCU in the last two seasons according to SP+.

That convergence has been driven largely in part by Matt Campbell’s defense. Campbell has taken a unit who finished in the 30s and driven them down into the teens in defensive efficiency. Couple that with a couple of NFL stars in David Montgomery and Hakeem Butler, and the Cyclones have been a force to reckon with the last two years, even with the relative revolving door at quarterback.

But, the Cyclones returned only 53% of their offensive production this season, losing not only Hakeem Butler and David Montgomery, but also underrated receiver Alan Lazard. The Cyclones and the Frogs again have nearly identical profiles, both far more defensively inclined than offensively, but both near the top tier of quality. Let’s dive into the numbers and see key points for the matchup of two similar teams.

Author’s note: I lean heavily on EPA, expected points added, in the analysis below. It’s an incredibly useful measure, which explains in one statistic not only the frequency of a team’s success, but the magnitude. For a primer on EPA, read my pre-season post here.

WHEN IOWA STATE HAS THE BALL:

The Cyclone offense has had an intriguing year after two contentious games to start the season; whereas their point results from the first two games indicate a stumbling unit, they gained 463 in a 2OT win against Northern Iowa and 418 in a game against Iowa (who ranks 22nd in Defensive SP+ and is allowing 251 total yards a game). In fact, the Cyclones have out-gained every opponent except Baylor.
Those total numbers can be deceptive, though – the Cyclone offense has been particularly effective with the rush, but less so with the pass. On all downs, the Cyclones are averaging 7 yards per play: 5 per rush and 8.5 per pass, putting Iowa State at exactly average in rushing and about 1.5 yards per play above average in passing.

Iowa State plays to their strength, passing 56.5% of the time. In terms of expected value, a pass from the Iowa State offense is worth .338 more expected points than a run, meaning that when the Cyclones pass, they are increasing their expected value by more than a third of a point. The broad numbers, though, include situations like third and short, which might bump up the rushing number. We can add some more context to understand exactly how Iowa State moves the ball.

On early downs, Iowa State’s yards per play increases, and their EPA rises across the board. The Cyclones make their rushes count on early downs, rushing only 48% of the time, but adding .034 points in expected value for every rush. Filtering out third downs really shows the efficiency of this Iowa State attack: the national average for Early Down EPA on passes in 2019 is .06, meaning that Iowa State is 6.5x better than average.

Much of that rests on Brock Purdy’s shoulders. A couple of ill-timed turnovers have cooled the nation on Purdy-mania, but he’s established that last year’s hot streak was anything but a fluke.

While Purdy’s arm has been particularly dangerous, he hasn’t been very effective with his legs, which is where TCU really struggles. Purdy averages 3.1 yards a carry, and while he does have three rushing TDs, he doesn’t even rank on the leaderboard for EPA. No, to stop the Cyclones, TCU will have to rely on its passing defense, one of the best in the country.

The Horned Frogs rank 19th in SP+ on the back of their defense, the 17th most effective defense in the nation according to SP+. (FEI likes the Frogs even more, at 5th.) TCU’s allowing negative EPA for both passes and rushes this season (negative is better for defenses), and have virtually shut down offenses all season. *It bears mentioning that TCU shut down SMU’s offense, despite allowing 41 points – if you’ll recall, three turnovers gave SMU the ball at an average of the 17 yard-line, and TCU held the Ponies to only 10 points (3.33 points per opportunity) in those drives.*

Gary Patterson mentioned after the game Saturday that having Vernon Scott healthy allowed TCU to run their dime package, and more of the same this weekend will present perhaps the stoutest test Iowa State has faced this season: TCU’s pass defense is allowing only 5.42 yards per play, and even more impressively, a -.166 EPA on passes, about 3.72 times better than the average FBS team. The pressure has looked, at times, non-existent – the Frogs rank in the bottom of the nation with 2.0 sacks per game. With a QB who isn’t a huge rushing threat, perhaps the Frogs can pin their ears back and boost their pass defense with a rush.

The Frogs have limited explosive plays and been fairly productive with turnovers, and they’ll need to continue that to succeed this weekend: the Cyclones have lost the turnover battle in every game but one this season, and sit at a -4 margin on the season.

WHEN TCU HAS THE BALL:

When discussing the Horned Frog offense, we have to discuss a few items not of statistics, but of philosophy. The TCU offense, in a golden age of college football innovation, feels uncannily stuck in the year 2010, grasping still to a simpler and better time. The fact of the matter is that TCU will never again have an explicit and demonstrable talent advantage over its foes, as it did in the Mountain West, and “speed in space” will not work. Successful offenses far and wide are recognizing the value of play-action, something the TCU offense apparently has developed an allergic reaction to.

This rant is better served for a longer piece, but I’ll state the points succinctly: TCU’s offense, in its current form, lacks imagination and fails to put its best players in a position to succeed. Yes, Darius Anderson and Sewo Olonilua are uniquely talented individuals rushing behind an experienced offensive line, but TCU’s reliance on the rush has two negative effects on their production as a whole. First, it puts an inherent ceiling on a play: the best rushing team in the nation, Oklahoma (7.99 yards per play) uses the QB rush in the RPO and the designed run play as a punishment to defenses over-defending the pass. The best passing team in the nation (aside from OU for the purposes of illustration) is Minnesota, averaging north of 11 yards per play. In your best case scenario, ideal world, an elite passing game is strictly more useful than an elite rushing game, which reveals the second negative effect of TCU’s reliance on rushing: Relying on the rush as a crutch has stifled the development of the passing game. TCU ranks 88th in passes attempted nationally, in front of only Kansas and Kansas State in the Big 12. With weapons like Jalen Reagor and the emergence of the tight ends as pass receivers, TCU has done nothing to update their passing game. Even the few times they use play-action, it’s barely more than a ball fake for the purpose of timing. TCU has a huge opportunity to exploit defenses who have to respect the Frogs’ incredible run game, and instead of innovating, TCU instead commits to archaic “establish the run”. How much better do you think TCU’s run game would be if a team also had to account for the deep ball, or at even the mid-range pass?

I filter out third downs, because TCU’s rushing success is driven in part by their third down success. TCU converts 52.83% of their third downs, good for 7th in the nation, and that comes on the back of their rushing attack. The passing attack has been lacking, and that’s a bit of a self-fulfilling prophecy – TCU is passing on only 37.5% of early downs, meaning most of their passing is coming on later downs! Yes, it’s struggled, but a pass game isn’t some immutable burden you have to deal with – you can improve it (with play action) and with scheme. TCU passing early and often will increase rhythm, and yes, it will establish the pass. Iowa State’s defense, the lone Big 12 peer of TCU, has stifled a couple of great offenses – it held Baylor and Iowa to season lows in yards. The are slightly more susceptible to the pass than the run, and TCU will have to capitalize on that slight discrepancy if they’re going to win in Ames.

The world is calling for this to be a defensive slugfest, and so of course, I think it’ll get weirdly pointsy. I’m predicting a naive margin of ISU +9 on their home field. Turnovers and TCU’s passing offense will be what this game comes down to. Let’s say: ISU 31 – TCU 23.