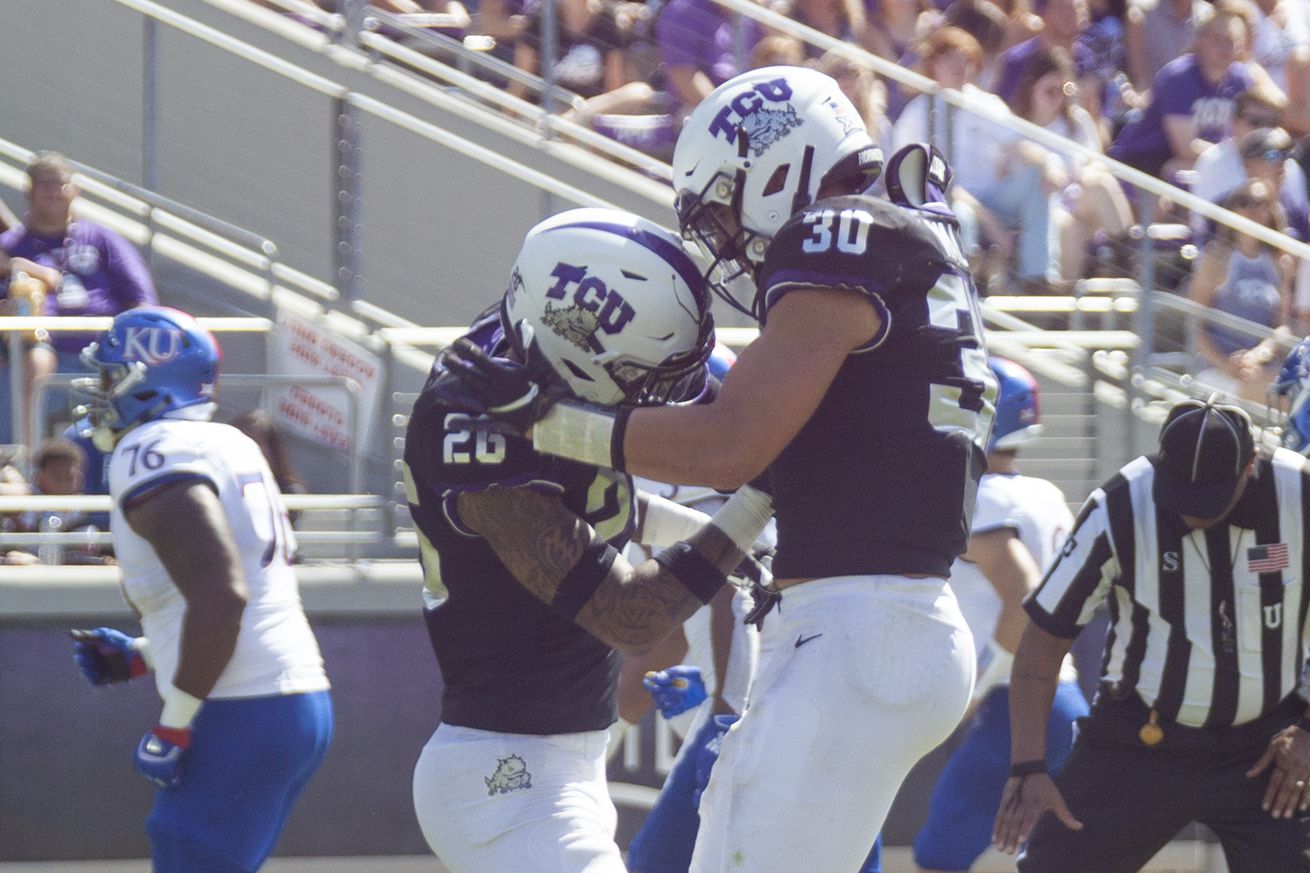 Are the Frogs actually who we thought they were? It sure looked like it, albeit against an overmatched and out-coached Jayhawks squad Saturday morning.

It was exactly what Frog fans have been waiting for all season.

The game started on an amazingly positive note, as Frog fans were surprised with the return of kick-off specialist Cole Bunce, who many believed would not play again after a scooter accident on report day back in August. Bunce started the game with a touchback, and the defense responded with a quick 3-out, helped by a beautiful tackle at the line of gain by Garret Wallow.

That put the offense on the field in good position, and they took advantage. Maybe Sonny Cumbie has been on twitter, following the hashtag #runthedamnball, because that’s exactly what the Frogs did. Darius Anderson was given the first three touches, breaking free for a big 22 yard gain on the middle one, and helping set up a beautiful throw and catch sequence between Max Duggan and Dylan Thomas, as the freshman QB dropped a dime into double coverage for the senior receiver’s first score of the year.

Look at this damn ball:

I’m not sure where Duggan found that kind of touch, but it stuck. He threw another really nice ball to the corner of the end zone to giant human man Pro Wells for the Frogs’ second score of the day, making it 14-0 before the Jayhawks even had a first down.

As the TCU offense finally started clicking, the defense got back to the dominating form we saw two weeks prior at Purdue, bottling up a potent Kansas run game and keeping quarterback Carter Stanley on the ropes and on the run as he struggled to make anything happen. Williams managed to break free for a ten yard run on KU’s third possession of the game, but it wouldn’t matter – the Frogs forced a third straight punt three plays later.

That would be the theme of the day.

Every time TCU got the ball in the first half, they scored – five straight touchdowns preceded a field goal with one tick left on the first half game clock. Duggan’s two touchdown passes were followed by an electric Jalen Reagor punt return, who had just one reception (after just two last week) but still found a way to get involved in the scoring on special teams. Side note: what in the heck do the Frogs have to do to get their best offensive player more involved in playing offense? I understand teams are shifting coverage to him, but it’s absolutely unbelievable to me that a player that good has just 11 receptions on the season, when we have regularly seen him do that IN A GAME over the course of his career.

Anyway… back to regularly scheduled recapping.

Leading 21-0, Sonny Cumbie and TCU kept feeding Darius Anderson and Sewo Olonilua, as the backs wore down the front line of the Jayhawks with a series of nifty cuts and some powerful running up the gut. Anderson was nearing the century mark by halftime, finishing with over 100 yards rushing for the third straight game. He added a score for good measure. Olonilua got in the end zone as well, showcasing the speed that always seems to surprise folks by beating the defense to the edge for a six yard score late in the second quarter to make it 28-0. Emari Demercado 11 yards before leaving with an injury. Even Alex Delton got into the fun, going 7-9 through the air for 115 yards – including an absolutely perfect ball to Tevailance Hunt that went for 49 yards.

On the other side of the ball, KU found very little breathing room when facing a TCU defense that surrendered just three first downs and only 49 yards. Wallow and Blacklock each had a tackle for loss through the first 30 minutes, while Vernon Scott was everywhere- breaking up a trio of passes and blanketing the Kansas receivers all over the field. It was the kind of domination reminiscent of the last time the Jayhawks played football at Amon G. Carter Stadium.

After the half, the Frogs’ offense slowed to a crawl, as they punted on three out of four possessions with a missed 42 yard field goal in between. Committed to holding true to his promise to keep multiple quarterbacks ready, Patterson and Cumbie alternated between Duggan and Delton in the third quarter, though neither was able to move the ball much. Darwin Barlow got several touches, and got into the end zone on a reception – only to see it called back by a penalty. The Frogs would draw a lot of laundry in the second half, giving Kansas two first downs on penalties on a drive late in the third as well.

While the Frogs’ offense stalled, the Jayhawks’ finally found pay dirt, as Velton Gardner broke free for a 45 yard touchdown early in the fourth to make it a 38-7 ball game. The Frogs would answer behind Delton, Derius Davis, and Daimarqua Foster, as Davis took a short pass 52 yards and Foster finished the job (after a pair of penalties) and found the end zone for his first career carries and first career score. With less than ten minutes to play, TCU was well in control, leading 45-7.

After Kansas’ ninth punt of the game, Michael Collins got his first action of 2019, handing off to Darwin Barlow three straight times while the Frogs failed to get a first down. The Jayhawks took advantage of good starting field position on the ensuing drive, as Carter Stanley found Pooka Williams up the middle for a 25 yard passing touchdown, making the score 45-14 with under four minutes to play in the game. Collins would get another shot, and take advantage of it – completing his only pass attempt of the game (for a first down to Davis) and ending things with an 11 yard run to the end zone as time expired to cap the scoring. He has been REALLY good against Kansas in his career, after all. That play was made possible thanks to Les Miles using his timeouts late, and frankly, salty Gary going for the extra score is a-ok by me.

We also saw a bit into the future on the final drive, as freshmen Darwin Barlow and Daimarqua Foster alternated carries. They would finish having combined for 111 yards and a touchdown on the day, on 21 total carries.

If we are going to pick nits, it’s worth noting, that while the Frogs were very good in he red zone (six for six), they did have multiple touchdowns called back because of penalties. On three of them, they managed to score, though one did cost them – leading to a missed field goal. In all, TCU was penalized 10 times for 95 yards on a day where almost everything else went right.

Ultimately, TCU did what they needed to do Saturday morning – get a win against a team they were supposed to beat, get their offense on track, and showcase a defense that was supposed to dominate but got kicked in the teeth a week ago. They win their first conference game of the season, and have all the momentum in the world heading into a critical showdown in Ames a week from today.

All is right in Fort Worth today, but the journey is truly just beginning.