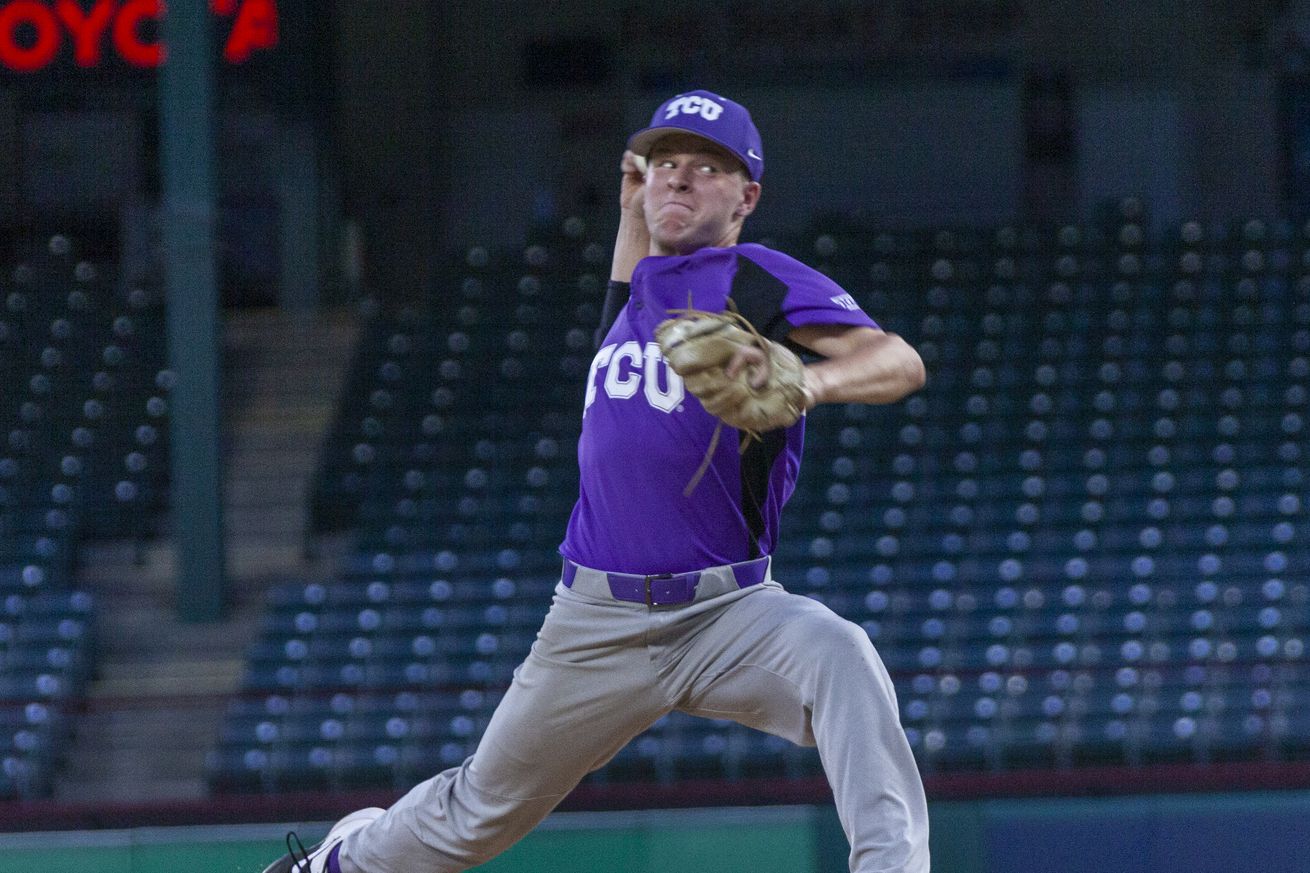 Jacob Meador was one of several new faces to impress in their TCU debuts. | Melissa Triebwasser

There are so many new faces for TCU Baseball, but the future looks bright.

TCU Baseball was one of the teams to close out Globe Life Park, taking the field two days after the Rangers’ final series at the 25 year old stadium against a group of the team’s prospects. It was also our first look at a team that looks completely different than it did just a few short months ago, welcoming a stunning 25 new players to their roster.

The Frogs used a plethora of new pitchers Tuesday night, and the only players to start in the same position he played a season ago were third baseman Conner Shepherd and catcher Zach Humphreys. Returners Austin Henry (started at DH, played some first base), Hunter Wolfe (center field), Bobby Goodloe (second base), and Porter Brown (left field) all returned to action, getting used to new roles or coming back from injury.

On the mound, TCU started Drew Hill, a junior righty who last played at South Mountain Community College, and also found innings for highly-touted true freshman Jacob Meador (2.0 innings, 0 hits, 0 walks, 2 Ks), junior righty Johnny Ray, returning sophomore Matt Rudis, Marcelo Perez (last season’s closer, who missed significant time late due to injury), senior lefty Haylen Green, and two other promising freshmen – Riley Cornelio, who certainly could have gone pro – and Jacob Speaker, a local arm out of Fort Worth All Saints who was able to pitch to his twin brother Mason, a catcher, to close out the game. Getting highly touted guys to campus, especially on the mound, was huge for TCU, according to head coach Jim Schlossnagle. “That’s always the key in baseball recruiting, how is the draft going to affect you? You saw it there with guys like Meador and Cornelio and Drew Hill and Johnny Ray [two juco guys that could have gone pro]. The guys you pick and you recruit for two or three years, you’d like to show up here.” Schloss went on to talk about a guy they hoped to have in purple that they ended up facing Tuesday night instead. “Of course we had to face one that we lost that’s supposed to be a sophomore for this team in Cole Winn, but we’re happy for him.”

Offensively, Yavapai College transfer Tommy Sacco had a big night, getting two hits – including a triple – and knocking in a pair of runs. Vying to be the Frogs’ new short stop, he proved he belonged in the lineup with his solid night at the dish and in the field. Pima College transfer Phillip Sikes was solid as well, collecting two more hits for TCU. The offense will be a work in progress early; with so many transfers and freshmen, an adjustment to this level of play is to be expected. The Frogs committed a pair of errors as well as they did a lot of substituting to get guys in.

It was a solid test for the Horned Frogs, who faced some high-level A ball type players for the Rangers — including a few familiar faces. Former Red Raider Josh Jung and Baylor Bear Davis Wendzel were among those taking hacks at the young TCU pitchers – but the Frog arms more than held their own Tuesday evening.

It was also, for all intents and purposes, the final game played at Globe Life Park in Arlington, as the stadium shutters to make room for a domed affair just down the road. The nostalgia was not lost on the players or coaches. “What an awesome life experience, to play in a big league ballpark – especially the last game. I’ve lived here for 17 years, this place has provided a lot of awesome memories,” Schlossnagle said. “For me personally and for my family. So to play the last ball game in here, we’re very very grateful to the Rangers for hosting us.” Meador echoed it. “It’s pretty crazy to know that this game is officially the last game that will be played at this park. It’s unbelievable to have that experience.” Zach Humphreys agreed, relaying a story about sitting down the first baseline in a Rafael Palmeiro shirsey as a young kid. “Oh absolutely it was fun. It’s always cool to play in a big league ballpark. It was cool being one of the last guys playing on the field.”

The start of TCU’s Baseball season was a great way to end an era in Arlington. Good night, Globe Life, hello Horned Frogs.

Let me officially be the last person to say goodbye to baseball at Globe Life pic.twitter.com/ol0MvUhlbw