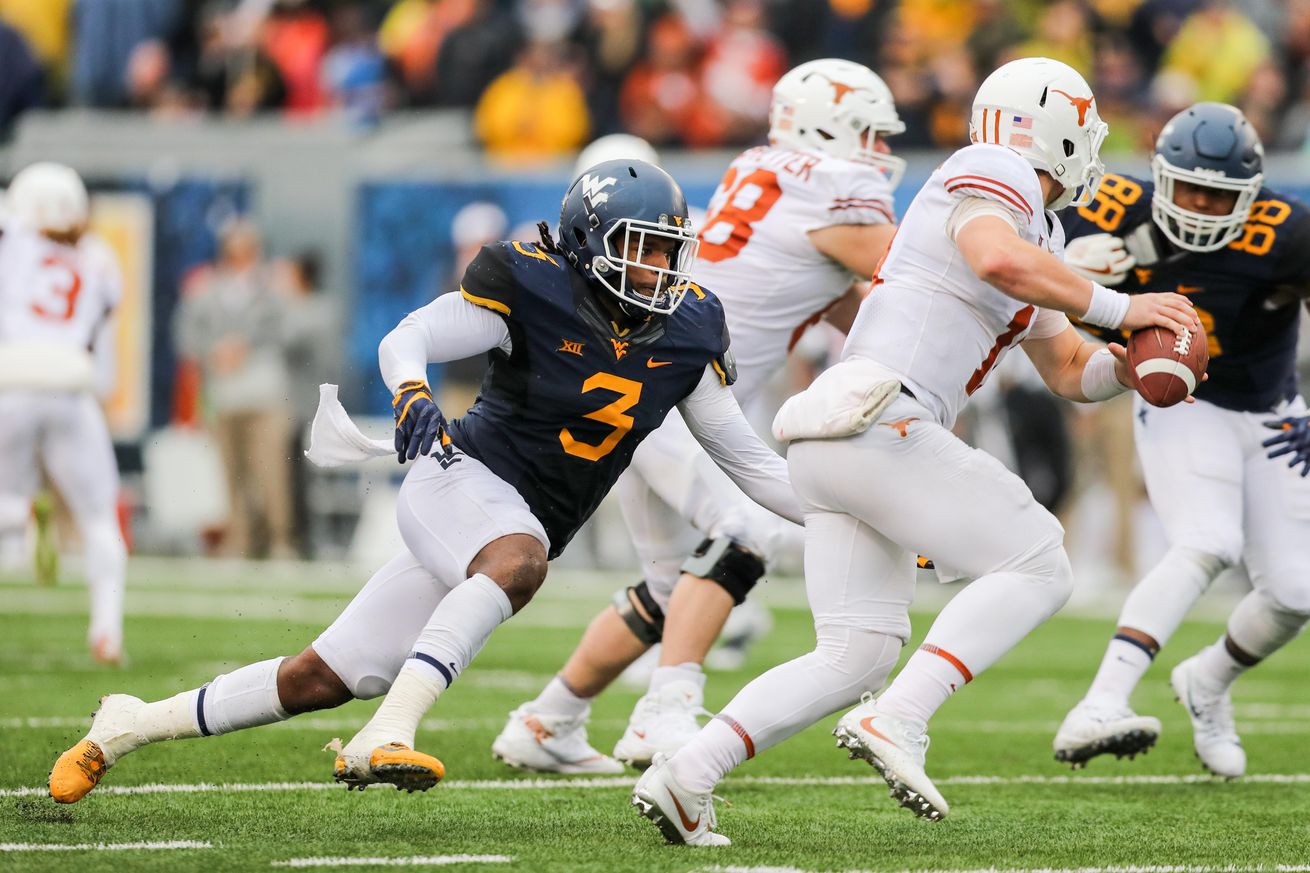 A potent offense should allow the Longhorns to avoid a letdown during their first true road game of the season in Morgantown.

With each program coming off of a bye week, the No. 11 Texas Longhorns and West Virginia Mountaineers own identical records at 3-1 overall and 1-0 in Big 12 play.

Texas unsurprisingly enters the matchup as the favorite, but a West Virginia squad that’s looked fairly underwhelming to begin the year can make a statement with a win over a battered Longhorns team set for its first true road test of the season.

The Burnt Orange Nation staff got together to weigh in on how the Horns have fared thus far this season and what we expect to see on Saturday afternoon in Morgantown.

We’re now a third of the way through the season. At this point, what are you most impressed with from the No. 11 Longhorns, and what lingering issues could derail a potentially special season?

Cody: I expected the offense to be pretty good, but they’ve been borderline elite to this point and Sam Ehlinger looks every bit of a legitimate Heisman contender. On the other side of the ball, the Horns haven’t enjoyed ideal health in the secondary and I wouldn’t be at all surprised if that directly leads to a loss or two. That said, the offense is potent enough to still win games when the secondary struggles (see OU in recent years).

Wes: The seamless transition on offense from Lil’Jordan Humphrey to Devin Duvernay has been fun to watch and a reason this Texas team has performed relatively well to this point. I’d say the offensive line has also impressed given how much it shuffled around over the offseason. As for issues, injuries have to be at the top of the list, and the defense overall still needs some ironing out at each level.

Anthony: The potential transition that some of these defensive backs have to make due to injuries. Todd Orlando has already been forced to move guys around in the secondary. The question remains on how quickly and effectively they can adapt to his defensive schemes.

This isn’t exactly Will Grier’s WVU offense, with the Mountaineers ranking 94th in scoring (25) and 118th in total offense (326). After slowing OSU’s potent offense last time out, what kind of performance do you expect to see from the Texas defense?

Cody: The front should look much like it has all season and pretty much impose its will, but I think the secondary will give up a few big plays with a couple starters out. I doubt we’ll see them get torched like the LSU game, but WVU will probably find at least some success through the air. Sam James is the name to know here.

Evan: WVU QB Austin Kendall hasn’t looked particularly great to open the season. The Mountaineers want to establish the running game — if Texas can slow that down, it should force WVU to play uncharacteristically and throw the ball downfield.

Wes: I’d think more of the same as long as Todd Orlando calls a similar game by sitting back some rather than getting too aggressive. West Virginia’s offense isn’t one that can attack a defense downfield at will, and Texas doesn’t need to do anything to allow that or put its young corners in positions to give up big chunks on their own. The WVU offensive line is also one of the weaker units in the Big 12 so Texas should be able to generate pressure without sacrificing too much in coverage.

Anthony: Considering all the production West Virginia lost on that side of the ball, I’d expect a defensive performance similar to the one Texas put forth last time they were in Morgantown. The problems on defense root from facing up-tempo, big-play ability offenses. Unlike LSU and Oklahoma State’s explosive offenses, the Mountaineers have yet to find their identity on offense. Orlando’s aggressive unit should dictate the flow of this game.

Keaontay Ingram had a career night vs Oklahoma State with 114 rushing yards, and the Mountaineers have fared worse in slowing the run. Will Ingram’s recent rise continue in Morgantown?

Cody: Not going to say he’ll set a new career-high just one game after setting a career- high of 114 yards, but I think Ingram will look much like he did against OSU. Will he see enough carries to break 100 yards? Probably not, but he’ll likely continue to move the chains pretty often on Saturday.

Evan: WVU has had trouble against dynamic RB this year — Missouri gashed them for over five yards per carry in their game. With an O-Line that should be able to handle the WVU front seven, Look for Ingram to have another solid game.

Wes: I don’t see why Ingram wouldn’t have another good game this Saturday, even if the West Virginia defensive line is actually a somewhat solid unit. The Texas offensive line has been creating running lanes, and Ingram capitalized on that well last weekend.

Anthony: All three of Missouri’s running backs averaged over five yards per carry on 10-plus carries against the Mountaineers, so I don’t see why not. Ingram looked like a completely different back without the knee brace against Oklahoma State.

On paper, Texas shouldn’t have much of an issue with WVU, but games aren’t played on paper. What problems can this Mountaineers team pose for Texas that could potentially lead to an upset win?

Cody: The only area I’d be concerned with is pretty obvious with the collection of injuries in the secondary. As is, it’s a unit that hasn’t performed especially well this season, and they’ll now be down two starters in Caden Sterns and Jalen Green. I’m fully expecting WVU to come out and put some air under the ball.

Evan: Everyone is going to point out the obvious — injuries in Texas’ defensive secondary. The only other thing I’ll point out is that the Longhorns have had trouble making that road trip and playing well in the past. That, coupled with the fact that this is a game WVU has (for some reason) circled and prepared for, means you could expect a closer than normal game.

Wes: Head Coach Neal Brown is a creative offensive mind and he could throw a handful of different looks at a Texas defense that will be relying on some reserves to step up at key positions. Any problems I envision are mental breakdowns in the secondary.

Anthony: It all falls on the shoulders of quarterback Austin Kendall and their wide receivers. If they manage to develop a rhythm through the air, that’s where Texas can be exploited.

Texas is coming off of a bye week (as is West Virginia). The Red River Showdown is looming next weekend. This will mark Texas’ first true road game of the season. Is this a trap game for the Horns?

Cody: In previous years, I’d say yes, but given the leadership Texas has on this team and the remarks keys players have made in recent weeks, essentially echoing the coaching staff’s comments about focusing solely on the game at hand, I think the Longhorns will be well-prepared to play.

Evan: It’s got all the makings of one, but I don’t think this coaching staff or this group of players will fall into that. Texas has every right to play lazy against LA Tech or Rice, but put up a ton of points in those and played excellent defense. I’d expect another good performance here.

Wes: I’d be lying if I said this game didn’t have some qualities of a “trap game” but with the way this Texas offense has been playing, that unit should be able to carry the Longhorns to a win even if the Texas defense struggles some Saturday afternoon.

Anthony: Not necessarily, but this game presents a great challenge for a lot of the younger players who’ve yet to play in a road game. As the season goes on, this experience will be beneficial before Texas faces true road tests against well-coached teams like TCU, Iowa State, Baylor.

Cody: Texas pulls away fairly early in the second half. Texas – 41, West Virginia – 20

Evan: In Texas’ first true road game, the Longhorns play it close to start the game, but pull away in the end. Texas 30, West Virginia 17

Wes: Texas wins 37-24 in a game they truly take ahold of in the second half. With it being the first out-of-state road game, and the Texas defense missing some key starters, it may take a full half for the Longhorns to put it together this weekend. Of course, I’d welcome a blowout against team “Horns Down”.