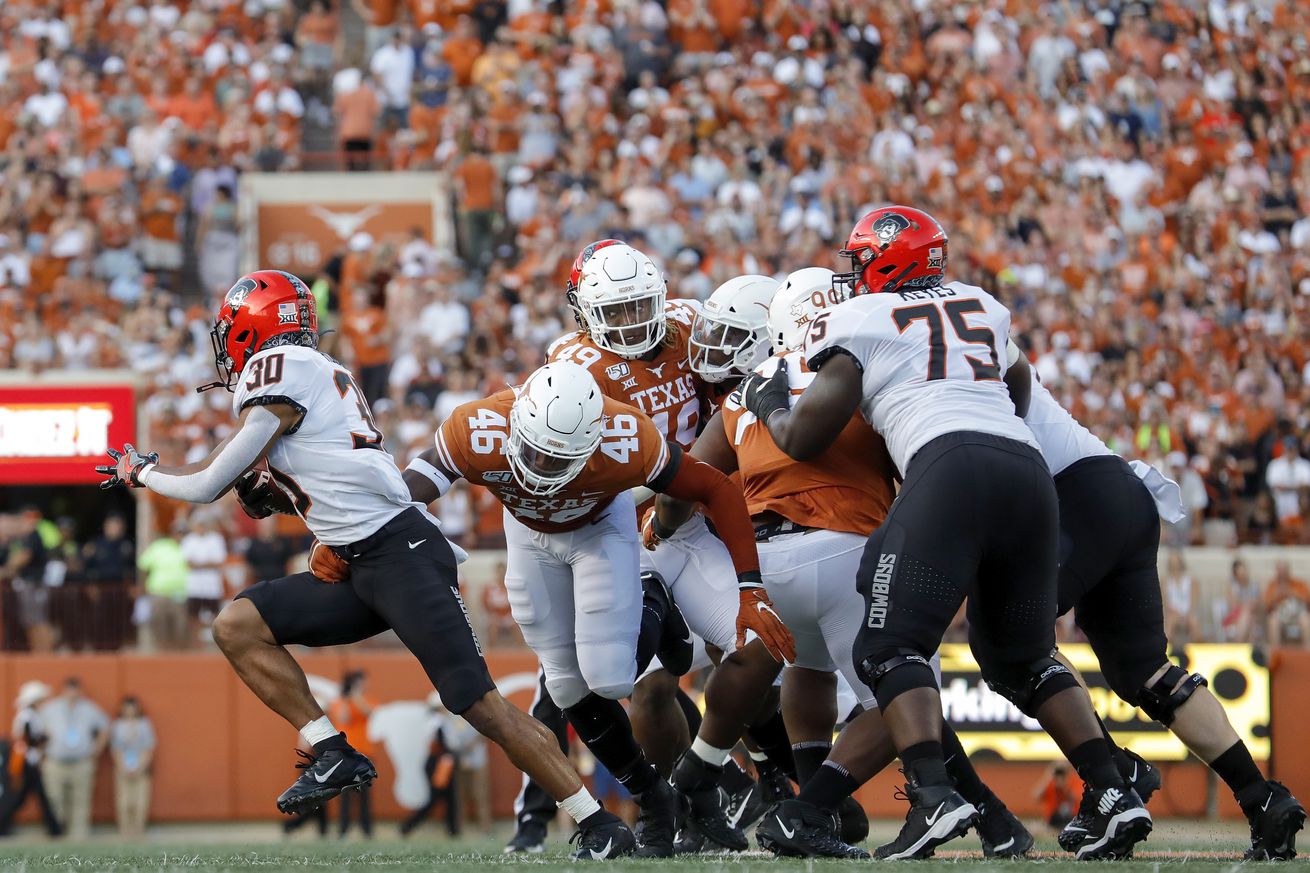 The Longhorns can’t right all their wrongs with a win on Saturday, but it would be an ideal start.

The first half of the season hasn’t exactly played out as planned for the Texas Longhorns, but after topping Baylor in Austin last weekend, Tom Herman’s program can capture some much-needed momentum on Halloween with a win over the No. 6 Oklahoma State Cowboys.

Of course, that’s a tall order for Texas, so the BON staff got together to discuss what must take place for the Horns to escape with a win, and more.

We’re now halfway through the season and Texas is still a team that flashes signs of dominance, matched only by mind-boggling errors and inconsistency. What have you seen the inspires belief Texas can finish the season strong, and what issues can lead to a similar second half?

Cody — The only thing that inspires belief has much less to do with Texas than it does the Big 12 as a whole being mediocre. Literally every game is winnable is Texas simply executes to the level it’s capable of and doesn’t kill itself, but to that end, I don’t think the Horns will. Whether it’s Saturday or some other time, it seems pretty close to a certainty that penalties, offensive line woes, lapses in coverage, etc., will lead to a Longhorns loss.

Cameron — When the offense is clicking it almost looks unstoppable and the defensive performance against Baylor was a big step up. But the offensive line has been inconsistent all year, Whittington and Smith can’t stay on the field, and those mind-boggling errors end up costing the Horns almost every game. If the later continues, the second half of the season will be worse than the first half.

Anthony — Finding the right mix between a consistent run game and a few explosive downfield throws. Considering Texas’ inability to run the ball between the tackles and injuries at wide receiver, that has yet to happen this season. The offense must play their ‘A’ game from here on out. It won’t get any easier against a retooled Cowboys defense on Saturday.

Gerald — I’ll start with the easy one first: I still think the offensive line needs to get more consistent in order for Texas to compete. I just haven’t seen it yet. Now for the thing that flashed, I think the defensive line played its best game of the season against Baylor. The Baylor offensive line is depleted, but the simple fact that they were able to get their hands on some passes and disrupt the QBs timing is something we’ve needed to see all year.

With a win, Texas is 4-2 and likely ranked among the top 20 again. With a loss, 3-3 and no longer in control of their Big 12 title aspirations. Is it fair to say the outcome on Saturday will make or break Texas’ season?

Cody — Saturday is especially important because OSU’s ranking — if Texas wins — could lead to the Longhorns playing with more confidence and with some much-needed swagger entering the second half of the season. But then again, whether it’s Big 12 title hopes of Herman’s hope of another year, every week is now a must-win.

Cameron — I think the season is already over. Sorry, but the expectations for Texas were as high as the ceiling coming in and even if Texas wins, I don’t think it will make up for the recruiting losses as well as the losses to TCU and Oklahoma.

Anthony — A win over Mike Gundy sure would help. As of now, Texas stands on the edge of a cliff facing a fall to rock bottom and what should-have-been a 1-4 start to conference play if they lose tomorrow’s game. Is that bad?

Gerald — I’ve said it before that basically every game from here on out is a must-win. Texas has zero room for margin and needs to win out for this season for not to be seen as an even bigger disappointment.

Spencer Sanders. Chuba Hubbard. Tulane Wallace. OSU has plenty of potential to be explosive, but has scored more than 27 only once — 47 vs. Kansas. Chris Ash’s defense has shown flashes, but inconsistency remains, so how confident are you that Texas’ defense can do its part against a Pokes offense that hasn’t yet hit its stride?

Cody — Somewhat confident? I haven’t been overly impressed by OSU’s offense early on considering the expectations they had and the competition they’ve faced, and the Texas defense has shown some signed of meshing. But I expect that Hubbard and Wallace will each find the end zone; it just depends on how often.

Cameron — After the Baylor game I’m starting to feel more and more confident. The Texas corners have yet to allow a receiver over 100 yards this year and the defensive line looks better every game. They did a great job of limiting Sanders, Hubbard, and Wallace last year and I think they could do it again.

Anthony — I’m fairly confident Texas’ run defense will hold up against Hubbard. If Ash and the defensive front stay aggressive and make life uncomfortable for Sanders in the pocket, Texas should be in position to take advantage. Oklahoma State’s air-raid attack presents quite a challenge if pressure isn’t getting to the quarterback. Too much over-pursuit can create running lanes for Sanders. Ash should be prepared to spy him on third-downs where Gundy may call a designed quarterback run.

Gerald — I would say we’re at a 5/10 on the confidence meter. I honestly think Oklahoma State has played three not good teams and Iowa State. I think that the Texas defense has shown that they are good enough to compete in the Big 12, but will face their toughest test in Oklahoma State.

On the other hand, Oklahoma State’s defense has been a unit worth noting, ranking 12th in efficiency and allowing only 12 points per game. In such a key game, can Sam Ehlinger and the offense finally find some rhythm, win this matchup, and force OSU to keep pace?

Cody — In a word, yes. I think the Texas offense will find enough to success and Ehlinger will lead the Longhorns into the 30s. Ideally, Texas can do so by producing consistent points to allow the defense to rest instead of exploding for 21 fourth-quarter point in another comeback attempt.

Cameron — OSU’s defensive line is 4th in the nation in sacks and can apply pressure without blitzing which is a cause for concern with this Texas O-line. If the front five can give Ehlinger time and allow him to find his groove, I think Texas has a shot.

Anthony — On paper, this looks like it’ll be the toughest test for Ehlinger and the offense all season. Somehow, Texas needs to play their most complete offensive game to date. Consistent line play and run-pass mesh simply hasn’t been there in each of the previous four games. It all starts with being more effective early in downs like they were against Baylor.

Gerald — Those numbers are floated by two one-score performances against Kansas and Tulsa and neither of those teams are any good at all. Ehlinger is by far the best quarterback they’ve played thus far and I think Texas has enough weapons that if they can keep the Cowboys guessing.

Whether it’s individual or a position group, what’s the one matchup Texas must win to return to Austin win a win?

Cody — Sam Ehlinger. He quite simply needs to be at, or very near, his A-game. When he’s on point, everyone else follows suite and looks good.

Anthony — Tylan Wallace against Texas’ quarters coverage defense. To me, Wallace is the ultimate difference-maker for the Cowboys offense. I would hope Texas is prepared to bracket him with Sterns overtop in coverage.

Gerald — The offensive line against the Oklahoma State pass rush.

Prediction: Does Texas capture a potentially season-altering win or drop back to .500?

Cody — I wouldn’t be a single bit surprised if Texas comes out, looks absolutely dominant, and cruises to a win, because that’s just a Texas kind of thing to happen with how the season has shaped up. That said, I’ll take OSU, 34-31.

Anthony — Texas scores on more of their drives, but Oklahoma State capitalizes with touchdowns, not field goals. Cowboys 28, Longhorns 27.

Gerald — I think Texas probably plays their best game of the season, but still comes up short. 35-28 Oklahoma State.