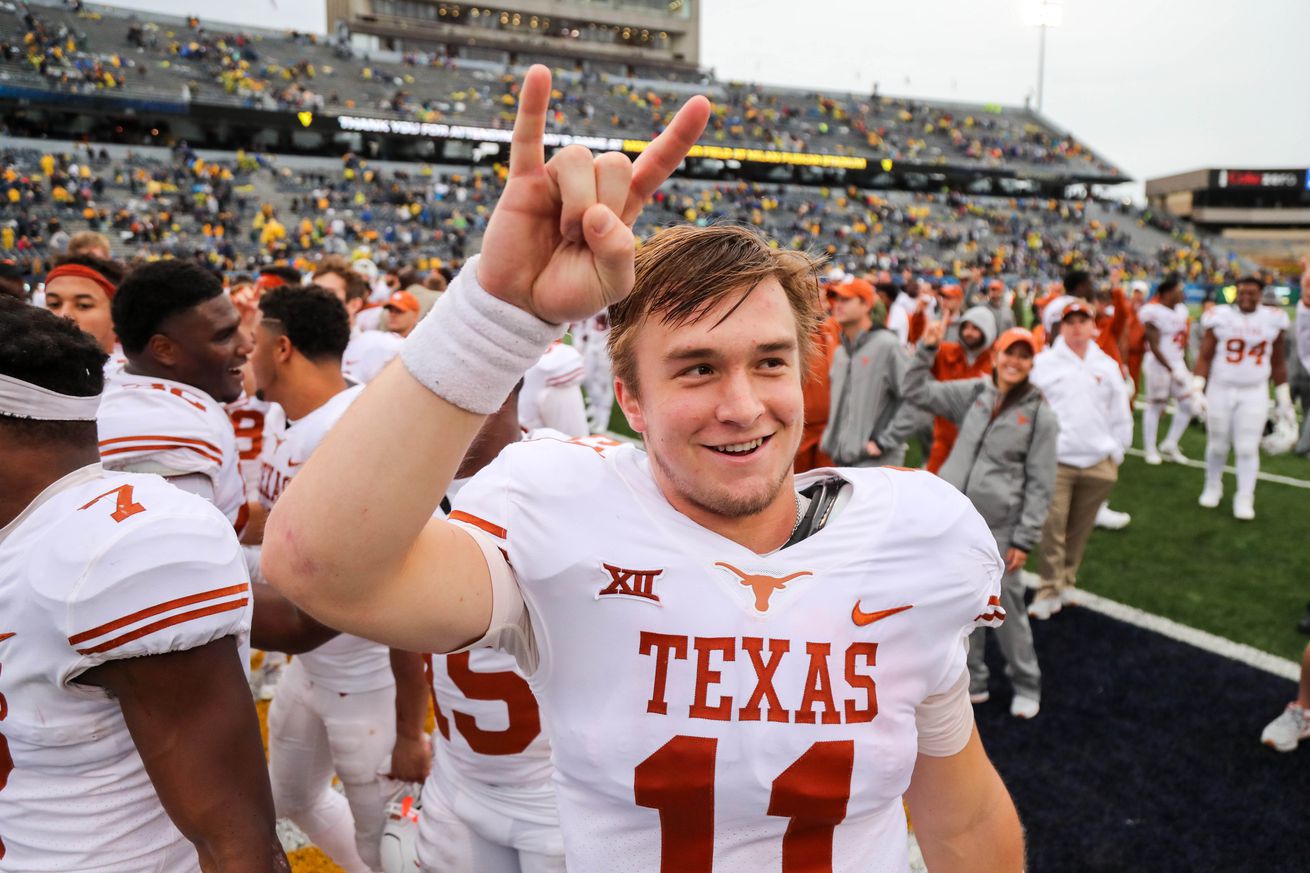 Two years ago, the Horns traveled to Morgantown and ended up celebrating the program’s first bowl berth in three years. Oh, how things have changed since then.

It wasn’t the typical post-game celebration that accompanies each win, though — as then-freshman quarterback Sam Ehlinger set the offense up in victory formation, veteran Longhorns who had endured more than their fair share of losses in recent years could be seen on the sidelines jumping, dancing, and brandishing smiles that suggested nothing less than pure elation.

That same type of smile was present on head coach Tom Herman’s face as stood waiting for the final seconds to tick away in a win that lifted the Longhorns to bowl eligibility for the first time in three years.

“We know we’ve got one left, but this was a big one,” Herman said after the 28-14 win over West Virginia. “This was a big hurdle — to get another road conference win, to beat a top-25 team, and make sure that our seniors are bowl eligible. These guys are ecstatic.”

As if the Longhorns so joyfully celebrating that bowl berth-clinching win in Morgantown wasn’t evidence enough, that “one left” that Herman alluded to is a perfect example of where the program was at that point, as a then-6-5 Texas team dropped its regular-season finale at home to a 5-6 Texas Tech squad, blowing a 10-point fourth-quarter cushion in the process.

At that point, though the Texas football program always houses tremendous expectations, the Longhorns weren’t exactly expected to win, at least from the outside looking in. In fairness, how could they have been after suffering five more losses than wins (16-21) throughout the three-year Charlie Strong era, and then splitting the first 10 games of Herman’s debut campaign before securing that ever-so-important win in West Virginia?

In the season and a third since that 2017 campaign, Texas has won 14 of its 19 games, with five of those wins coming against ranked competition, including No. 7 Oklahoma in the Red River Showdown and No. 5 Georgia in the Sugar Bowl last season. Of those five losses, three have come at the hands of ranked opponents, which included a 39-27 loss to the No. 5 Sooners in the Big 12 Championship last season.

That last time the Longhorns were in Morgantown, it was anyone’s guess as to when that Texas program would ever return to the Big 12 title game, where it hadn’t been since the Colt McCoy era. This time around, not only is Texas expected to beat West Virginia — unlike each of the previous two meetings — but a win would merely be another stepping stone towards an expected return to Arlington for the Big 12 Championship game.

With how far Texas has come since that frigid Nov. 18 afternoon in Morgantown, the standard is nothing less than that.

“Obviously our definition of success has changed. Our expectation level has changed,” Herman said on Thursday. “They should’ve celebrated that; I mean we’re talking about three straight losing seasons that we were coming off of. That’s a major step and should have been celebrated.”

“But in our program’s development as of now, that’s obviously an expectation of ours is to go to a really good bowl game each and every year to compete for championships,” Herman added.

“I think nobody on this team would ever say they’d be satisfied with six wins.”