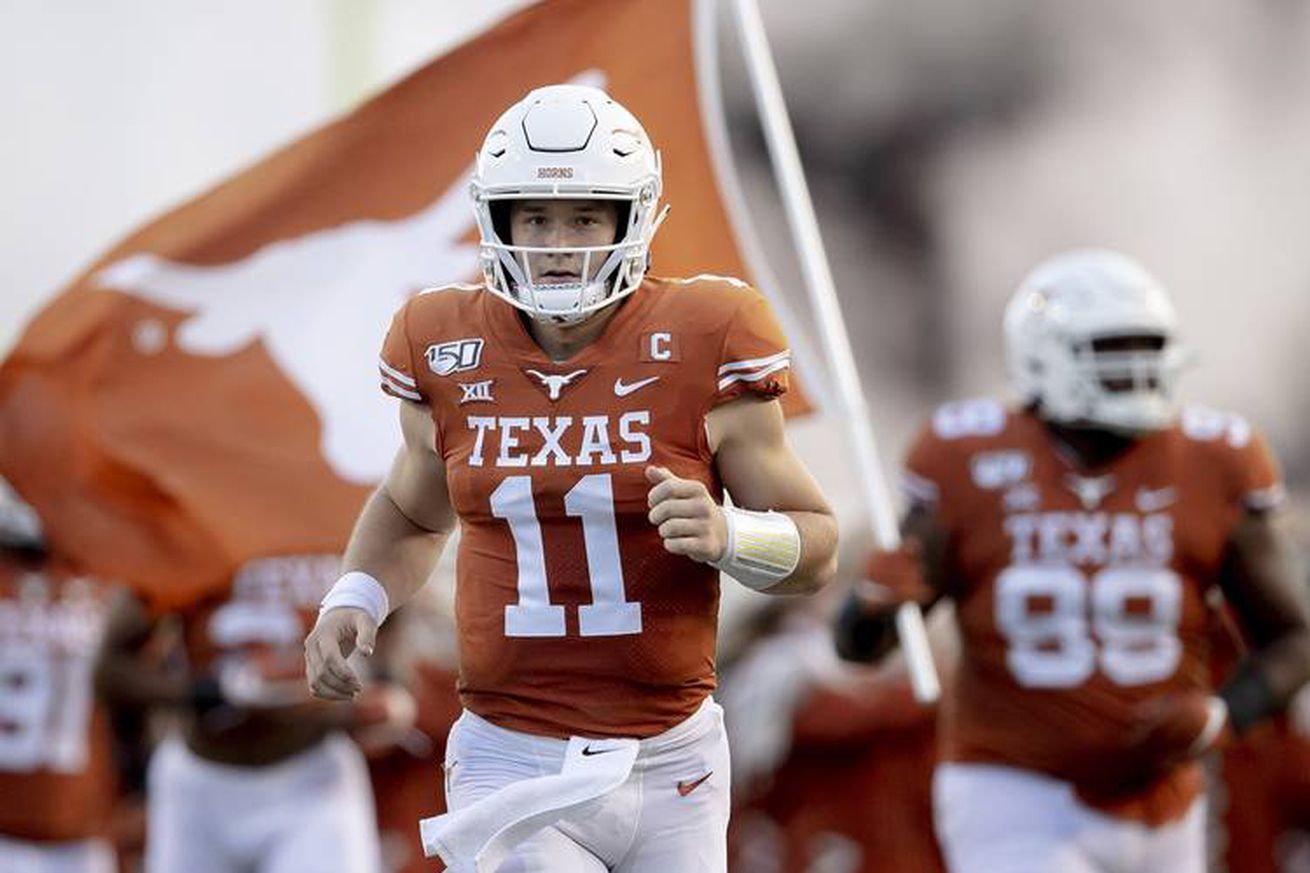 While Texas was busy smashing their snooze button on their alarm clock and resting up over their off-weekend, most of the Big 12 was at work. And over the weekend, we saw the Big 12 revert back to a somewhat normal state.

The top teams took care of business, the bottom teams rolled over and accepted their fate, and the middling teams — well, there’s still a lot to figure out in the middle of the conference.

With Texas returning back to the playing field to partake in their newly-minted rivalry* at West Virginia, let’s get into the Power Rankings.

*Apparently rivalries don’t need historical, geographical, or competitive significance anymore. Heck, you don’t even need two consenting schools. All you need is one loud fan base with pent up rage towards a hand sign. Welcome to 2019.

A reminder that the power rankings are not meant to reflect the current standings. They’ll be based on a combination of season performance, heavily weighing more recent games, and will take into consideration opponent quality compared to the rest of the conference.

Previous week ranking is in [BRACKETS]

Highlight: Jalen Hurts had a monster game in the Big 12 opener, (17/24, 415 yards, 3 TDs, 1 INT, 9 carries, 70 yards, 1 TD) firmly positioning him in the top four of many Heisman Candidate leader boards. His favorite target on the day was WR CeeDee Lamb, who snared 7 catches for 185 yards and three touchdowns — one of which came from this 71-yard TD strike.

Trending: UP. Their win over Texas Tech may not seem like much, but it was actually quite a historical win for the Sooners, as they became the sixth school in NCAA history to win 900 games (for those of you wondering, Texas has 911). A 901st victory shouldn’t be too hard for OU, with their next game a road trip to Lawrence, Kansas. As far as performance goes, Oklahoma just keeps on putting up gaudy stat lines, with Hurts leading the way in that department. It won’t be until next weekend that Oklahoma gets their first real test of the season — the Red River Rivalry game.

Trending: NEUTRAL. The week off came at the best time for a Longhorns team ailing with injuries. The Longhorns will have to overcome a number of injuries on the defensive side of the ball, which may be a tough ask considering they currently rank as the 102nd overall defense, allowing 436 total yards per game.

Highlight: OSU’s win can be summed up with two words — Chuba Hubbard. The RB had a career day against the visiting Wildcats, rushing for 296 yards and a touchdown on just 25 carries. His longest run of the day went for 84 yards.

Trending: UP. The trio of QB Spencer Sanders, WR Tylan Wallace, and Hubbard is as good a trio as you’ll find anywhere in the country. Their opponents are finding out that they may be able to slow down some of the trio, but stopping all three hasn’t happened yet. For Texas, Hubbard was slowed to just 3.3 ypc, but Sanders was able to carve out large chunks on the ground to move the ball and spread the defense thin. As for K-State, they limited Sanders, but Hubbard ran wild.

And with the defense stepping up and shutting down the Wildcats offense, the Cowboys are firmly entrenched in the third spot. They may not be good enough to win the Big 12, but they’re definitely good enough to spoil it for someone else.

Highlight: After falling into a 21-point deficit sized hole, QB Brock Purdy began the charge in an effort to lead the Cyclones in a huge comeback bid. The sophomore put up an impressive overall stat line of 342 yards on 27/45 passing with 2 TDs and an INT. Without Purdy’s strong performance, ISU wouldn’t have even come close to sniffing a win in this game, as the rushing attack only gathered 63 yards on 28 carries, and the receiving was spread out over none different receivers.

Trending: DOWN. Iowa State continues to make their case for Big 12’s most underwhelming team. Another slow start doomed the Cyclones, who nearly pulled off a huge comeback win over Baylor only to lose on a late field goal. This team’s struggles reside on the offensive side of the ball, where despite Purdy’s excellent play, the Cyclones haven’t had playmakers emerge to take over the roles vacated by RB David Montgomery and WR Hakeem Butler. ISU gets another crack at it this weekend against TCU in a game many thought during the preseason might determine which school would compete for the second Big 12 Championship game bid.

Highlight: Baylor built up a 21-0 lead, and held that lead all the way until the beginning of the fourth quarter. After that, ISU scored 23 unanswered points to take a 23-21 lead with just 3:45 left to play. QB Charlie Brewer led the Bears down the field and into field goal range, where freshman K John Mayers converted on a 38-yard field goal for his first career make, and ultimately sealing the game for the Bears.

Trending: NEUTRAL. The win nearly escaped them, but give credit to the Bears for pulling out the hard-fought victory over a quality opponent. The Bears have opened 2019 to the tune of an undefeated 4-0 record, and say what you will about their quality of opponents — this team has shown flashes of highly capable play in those games. However, red flags on both sides of the ball keep this team trending in neutral. The offense can be good to great at times, but disappears for long stretches. Meanwhile, this is the second game in a row where the defense started strong, only to get gassed late in the game. These deficiencies nearly caught up to the Bears twice already — be wary as their schedule only gets tougher from here.

Highlight: A week after cracking the top 25, K-State had trouble cracking the scoreboard. The Wildcats didn’t put points up until a field goal late in the second quarter. Their final two scores would come late in the fourth, with the game already decided at that point. QB Skylar Thompson had one of his worst games of his career Saturday, throwing for just 118 yards on 11-of-23 passing. Meanwhile, the Wildcats only mustered up 126 yards on the ground on 32 carries. The offense was as motionless as the water in the town in which this game was played.

Trending: DOWN. There’s no shame in losing on the road to a quality team in Oklahoma State. But the Cowboys exploited some issues in the Wildcats that we’ve yet to see this season. For starters, the most glaring problem was the rush defense, or lack of one. K-State allowed OSU to gain 373 yards on the ground, including 296 to Hubbard on just 25 carries. Second, the offense struggled mightily in this one, averaging just 5.1 yards per pass attempt and 3.9 yards per rush. To put it simply, Hubbard alone ran for more yards (296) than K-State had total offensive yards in the game (244).

Highlight: TCU opened up Big 12 play and din’t look back, as the Frogs kept their foot on the gas in a runaway victory over visiting Kansas. TCU got the score up to 21-0 by the end of the first quarter, and it was 38-0 at halftime. QB Max Duggan threw for 100 yards and two scores on 8/11 passing, while QB Alex Delton went 10/15 for 186 yards. The real killer for TCU, though, was running the ball, as the Frogs pounded Kansas to the tune of 319 yards on 61 carries. You can see the full highlights of their dominating victory here.

Trending: UP. An expected win, sure, but it’s refreshing for Frogs fans to see TCU absolutely handle Kansas in a bounce-back game from their SMU loss — they scored on all of their first-half possessions. Their defense is a typical Gary Patterson display of stinginess, as TCU is allowing just 246 total yards per game, the fourth best in the country. That D will be tested in an intriguing showdown in Ames against an underachieving, but still potent, Iowa State team.

Highlight: The Red Raiders struggled against the Sooners, particularly in the passing game. QB Jett Duffey only logged 120 yards passing on 11/20 attempts. The running attack ironically fared much better than their air game, with Tech getting 192 yards on the ground on just 37 carries. One of those carries resulted in Tech’s only touchdown of the game — a 13-yard score from RB Armand Shyne.

Trending: DOWN. They never stood a chance in this one. Jalen Hurts and the OU offense absolutely demolished the Red Raider defense (Tech allowed a staggering 19.3 yards per catch). Unfortunately, it doesn’t get much easier for Tech this weekend, as the high-flying OSU Cowboys visit Lubbock in the unofficial Dust Bowl game. Even if Alan Bowman were healthy, it’s tough envisioning this team as capable of playing above the 6-6 ceiling they’ve set for themselves in recent history.

Trending: NEUTRAL. Truthfully, an argument could be made that WVU belongs above Texas Tech. Following a brutal loss at Missouri, the Mountaineers rattled off two straight wins, including an impressive home win over NC State and a victory over Kansas to start off their conference season 1-0. Their first big test of the season comes this weekend, with Texas making their way into town. QB Austin Kendall has to be great and able to pick apart a depleted Texas secondary if WVU wants a chance at an upset. Crazier things have happened.

Highlight: The Jayhawks had a game to forget, as they got beat soundly in every phase of this game. QB Carter Stanley could only get 84 yards through the air on 12/29 passing, while Kansas backs combines for just 75 yards on 18 carries on the ground. The play count may seem low to you, and that’s because it is low. Their defense couldn’t keep TCU off the field, allowing the Frogs to run 88 plays to their 47, while being out-gained 625 yards to 159 yards.

Trending: DOWN. Following an encouraging start to the season with some competitive wins and losses, Les Miles saw first hand just how far Kansas is from being a weekly competitor in a P5 conference. The Jayhawks couldn’t get anything going on offense, and were gashed on defense by a TCU team that had its own offensive struggles heading into this game. The good news is that the Jayhawks played hard. The bad news is that they just aren’t good, and get the privilege of hosting Oklahoma this weekend.

STAT OF THE WEEK

In honor of #RIVALRYWEEK with the West Virginia game on deck for this weekend, there’s been plenty of Texas/WVU based stats floating around the Twittersphere. Here’s a couple of my favorites, courtesy of Kyle Umlang.

I get why Horns Down means so much to them. It makes them feel like they’re part of a club they have no business being in#ThisIsTexas #HookEm #TEXvsWV https://t.co/7n1NssDLnx

So far in 2019, Texas games are being watched by an average of 784% more people than West Virginia games.

If you measured the overall viewership difference, it would be enough people to fill West Virginia’s football stadium more than 181 times#ThisIsTexas #HookEm #TEXvsWV

But never take your real rivals for granted, y’all.

and they still can’t find 22 that can finish a football season much better than 8-4 https://t.co/MHJivTgcqs