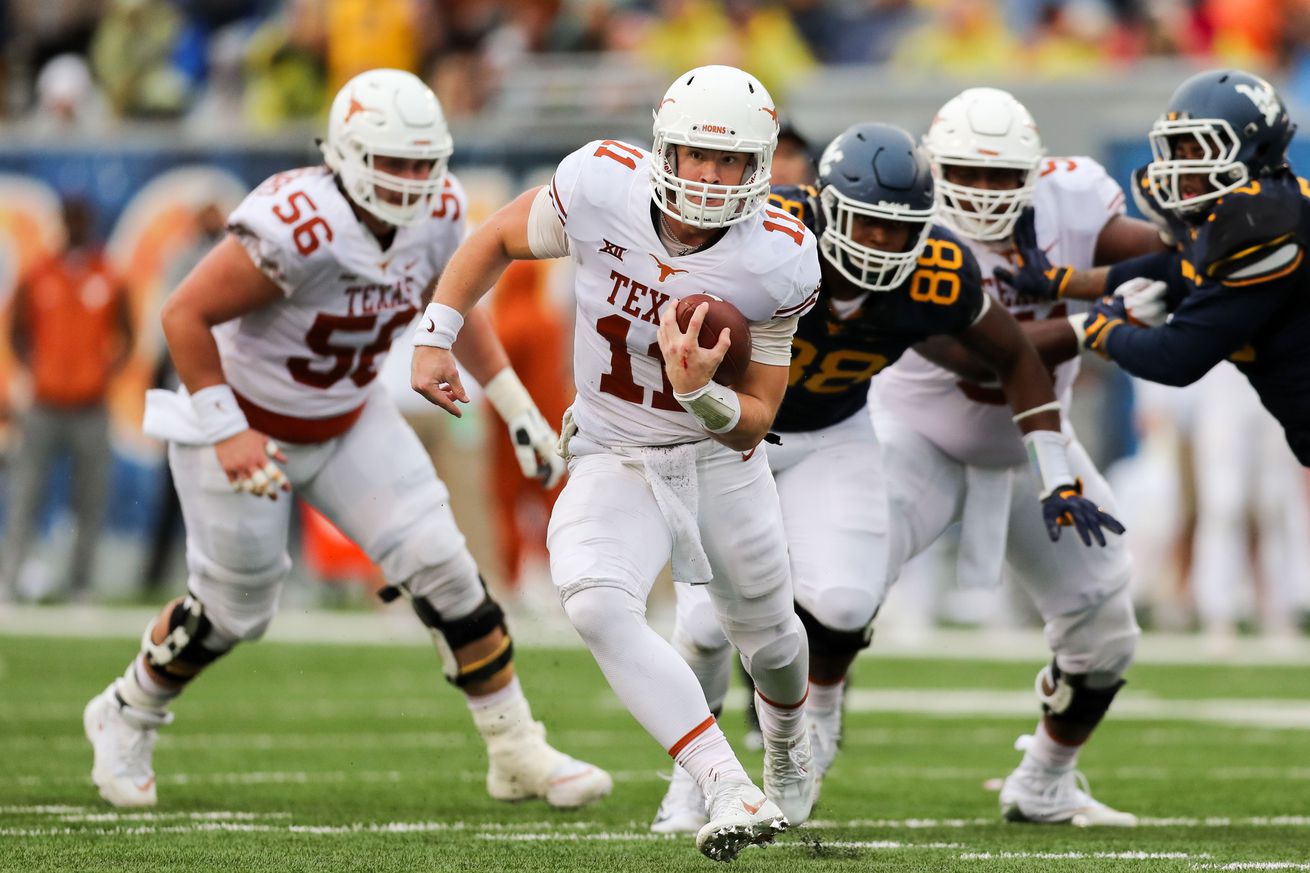 Texas has re-emerged as a power right as the Mountaineers are entering a rebuild.

Coming off of a bye week, the Texas Longhorns are ready to continue the march through Big 12 play, heading to Morgantown for their first true road game of the season against the West Virginia Mountaineers.

WVU, helmed by graduate transfer quarterback Austin Kendall, is into the first year of a rebuild under head coach Neil Brown. Their offense is not quite as high high-powered as it has been recently, but redshirt freshman Sam James is looking for a true breakout after a huge game against the North Carolina State Wolfpack.

To get some insights on the Mountaineers, we reached out to Matt Kirchner of The Smoking Musket (@SmokingMusket).

Burnt Orange Nation: One of the biggest stories of the offseason was the departure of former head coach Dana Holgorsen for the Houston Cougars. Neil Brown is now the man on the sidelines and has been known for his offense in the past, but West Virginia has struggled offensively in a few spots this year. What are you seeing that is contributing to the Mountaineers struggles on offense?

Smoking Musket: Honestly, a lot of it comes down to the sheer amount of production that Neal Brown was tasked with replacing. The lion’s share of targets out wide are from first-year contributors, either via transfer or freshmen.

Coming into the season, most West Virginia fans expected the returning talent at running back to carry the load on offense, but absolute ineptitude up front in our first two games made that a struggle, as well. Since Week 3, Neal Brown has done some shuffling in both scheme and lineup that has allowed the offense to find some success despite the talent deficiency.

BON: After transferring from the Oklahoma Sooners, quarterback Austin Kendall looked good in the opener before struggling against the Missouri Tigers. In the two games since, he’s played well, but he’s not producing what we’re used to seeing from a West Virginia quarterback. What do you expect from Kendall on Saturday playing against a more talented defense than he’s faced so far this year?

SM: Kendall is the definition of a game manager for West Virginia so far. He (mostly successfully) tries to avoid the game-losing mistakes but isn’t going to make the game-winning individual plays like Will Grier or Geno Smith did for West Virginia.

He’s definitely in for his toughest matchup of the season so far, and avoiding those mistakes is a non-negotiable if West Virginia wants to come close to springing an upset.

BON: A matchup to watch on Saturday is the Texas running game against the WVU rush defense, with Texas looking to get Keaontay Ingram going early. The Mountaineers have been sub-par against the run, allowing an average of 172.5 yards on the ground heading into the bye week. What will West Virginia do to slow down Texas’ ground game on Saturday?

SM: If this West Virginia team has a definite strength, it’s the defensive line. The Stills brothers at DT have been as good as anyone in the country and the team has given ample playing time to true freshman nose tackle Jordan Jefferson, who has definitely risen to the occasion.

WVU definitely wants teams to try and challenge them up the middle and force third and long opportunities to create turnovers.

BON: One thing West Virginia is doing really well this year is putting pressure on the quarterback. They have 11 sacks through four games and seem to find ways to create pressure from multiple angles and avenues. On the flip side, Texas has allowed just seven sacks through four games, with the offensive line playing really well in the last two games. How do you anticipate Vic Koenning dialing up the pressure against Texas?

SM: Again, the strength of this team has been the defensive front. Koenning has relied on those guys to create the bulk of the pressure rather than the exotic and aggressive blitzes you would see from Tony Gibson. It’s been a welcome change that has allowed us to find success without leaving our secondary on islands as much as in the past.

BON: Last year’s matchup featured the “Horns Down heard around the world,” spawning thousands of memes, some legislative overreaching by the Big 12 conference and some bad blood between the squads. Do you expect this to be a chippy game on Saturday or will all of the talk subside by kickoff?

SM: No, mostly because Holgo isn’t here. I think Brown will have the team prepared without as much chippiness as you’d see from the Holgo era Mountaineers.

SM: I’m very interested in seeing RS FR WR Sam James take on a slightly depleted Texas secondary. James may be the next star receiver for West Virginia, and much of the offense has gone through him early on. Austin Kendall will have to make the throws, but James has the talent to make a difference in this game.

BON: What’s your prediction for the game?

SM: West Virginia is better than I thought they were after the Mizzou meltdown, but I think Texas is too talented for this rebuilding squad to pull the upset. I think an energized Mountaineer Field keeps them in it through the third quarter but Texas pulls away late for a 38-24 win.