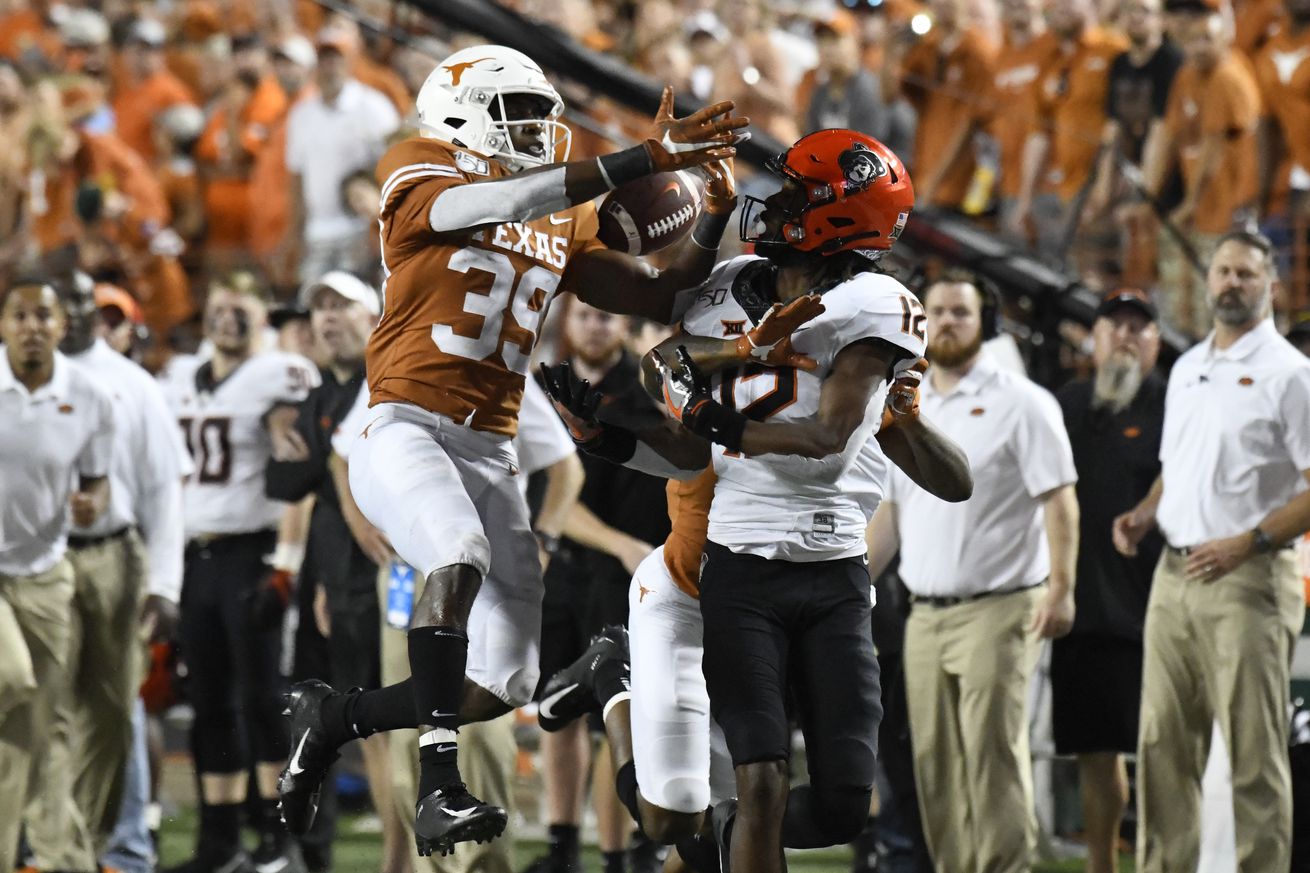 The bye week helped the Longhorns heal up, but what will they look like when they take the field against West Virginia?

The Texas Longhorns are hurting in the secondary.

In the win over the Oklahoma State Cowboys, defensive backs Josh Thompson, Caden Sterns and Jalen Green all sustained significant injuries. While Green and Sterns look to be back against the Kansas Jayhawks, Thompson will miss the remainder of the season after successful surgery on the broken bone in his foot.

So where does that leave Texas with the West Virginia Mountaineers and the Oklahoma Sooners looming on the horizon?

In the short-term, senior Brandon Jones’ stint at nickel back may be on-hold for one more week, slotting back in at safety alongside Chris Brown in the backfield. However, with Montrell Estell playing well against Oklahoma State — finishing with eight tackles and a big interception — the coaching staff could opt for Estell and Brown at the safety spots.

Green may likely be harder to replace, as he’s been the most consistent cornerback on the team and the only corner that the coaches would admit had solidified his starting spot.

D’Shawn Jamison is a player that could slot into that cornerback spot, as Jamison was listed as an “or” on the depth chart behind Kobe Boyce heading into Oklahoma State. Jamison is one of the faster players in the defensive backfield, a skill he flashed when returning a kick for a touchdown against the Rice Owls. Furthermore, he played especially well against Oklahoma State, making several plays in the backfield to help slow the Pokes’ potent rushing attack.

Sophomore Anthony Cook — a former four-star cornerback — showed some promise in 2018, but his time on the field has been few and far between in 2019. If called upon, he would need to get up to speed quickly with the first true road trip on the schedule against West Virginia following the bye.

Barring any more injuries, that group could continue to change, with the potential returns of B.J. Foster and DeMarvion Overshown, who are recovering from hamstring and back injuries, respectively. Foster played well at safety a year ago and could give the defensive coaching staff the flexibility to allow Jones to move back to the nickel spot or have a deeper rotation at safety.

The same can be said for Overshown, who is one of the most versatile players for Texas, thanks to a mix of size and speed at 6-foot-4, 210 pounds. If Texas is truly committed to playing Jones at nickel to help at the line in coverage and in run support, getting Overshown back in the rotation could be a linchpin.

At this point the preseason conversation about cross-training the defensive backs seems prophetic, as the Longhorns look to piece together a viable unit with two vital matchups looming on the horizon. The Mountaineers may be struggling, but seem to always give Texas a run for their money, while the Oklahoma Sooners offense is currently firing on all cylinders.