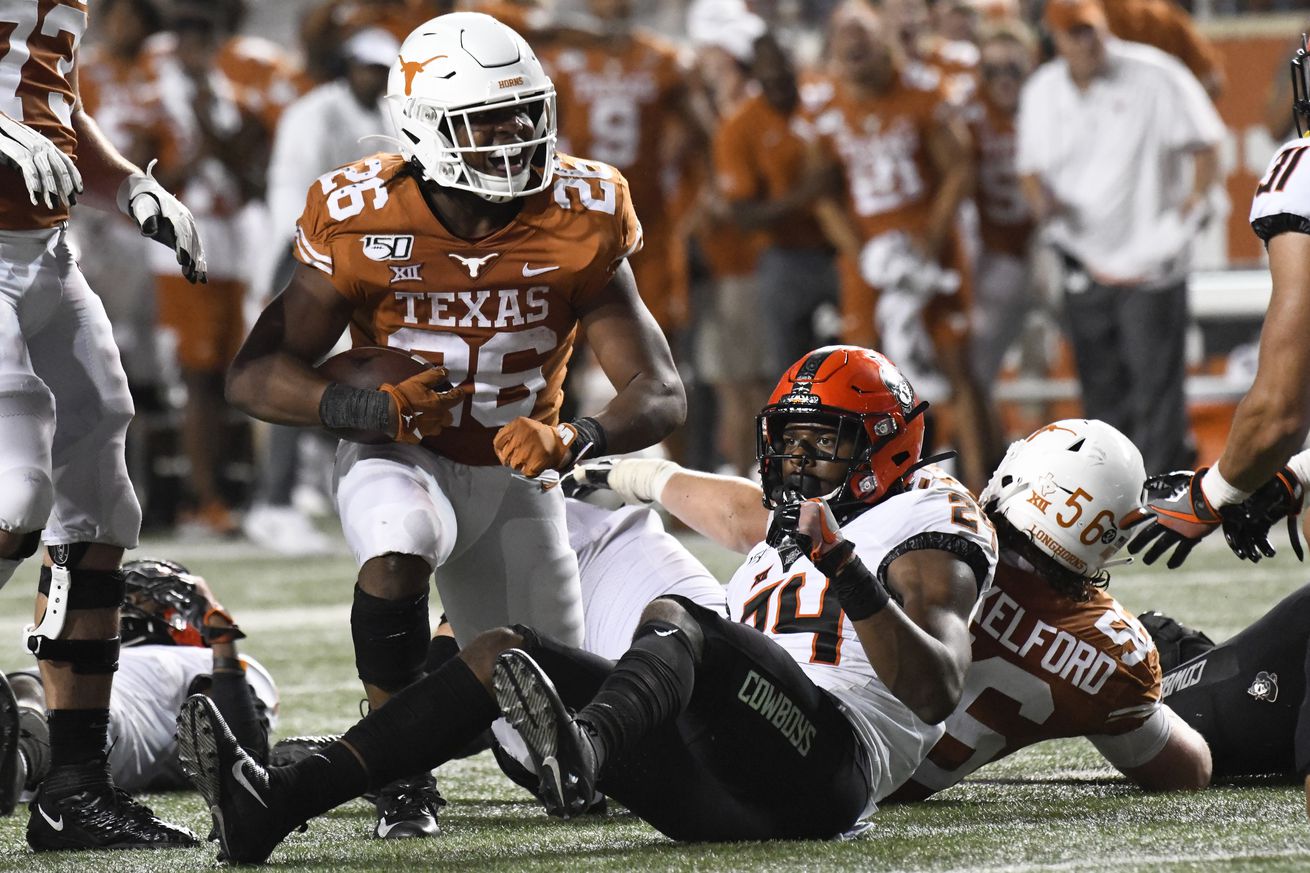 Ditching a pesky knee brace against the Cowboys helped the sophomore bounce back from a frustrating start to his season.

AUSTIN, Texas — All alone in the end zone on the biggest stage in college football, Keaontay Ingram did something he’d never done before in Austin — drop a football.

On 4th and goal from the LSU 2-yard line in the first quarter, the Texas sophomore running back was the intended receiver for an important play. Having failed to score on a third-down pass by junior quarterback Sam Ehlinger, the Longhorns were still in position to take an important early lead and head coach Tom Herman wanted to take advantage.

Herman even dialed up the perfect call. In a rare 12 personnel look, both receivers were split out to the boundary on the same side as the H-back, creating a favorable matchup to the field for Ingram and junior tight end Cade Brewer.

So when the end man on the line of scrimmage simply chipped Ingram on his way into the flat, the Texas running back was all alone. The pass forced Ingram to twist his body around, but still hit him in the hands. In a rare moment of fighting the football, Ingram wasn’t able to secure it and the ball hit the turf.

Expecting his sure-handed teammate to finish the catch, Brewer ran towards him with the both arms in the air signaling a touchdown. In the stands, Ehlinger’s younger sister had to inform their celebrating mother of the unfortunate news.

After the high-profile mistake, the sophomore struggled to bounce back mentally, eventually giving way to converted quarterback Roschon Johnson in the fourth quarter as the Horns attempted to mount a late comeback. Ingram finished the game with only 29 yards on 10 carries, then tried to take responsibility for the loss in the post-game locker room.

His teammates came to his defense, with Ehlinger and senior wide receiver Collin Johnson both trying to take the blame on their own shoulders, but the damage was already done. In the week that followed, there was intense speculation about whether Ingram’s offseason weight gain was hampering his explosiveness. More critically, there were questions about his mental state.

The start of the Rice game didn’t provide a lot of optimism — Ingram only gained one yard on his first four carries and again gave way to Johnson, who finished the drive with a 25-yard touchdown catch on a wheel route.

On those four carries, Ingram looked impatient and missed some of his reads as a result, an area where the coaches said he made tremendous strides during the offseason.

On the sidelines, running backs coach Stan Drayton had to remind Ingram to be patient, as Texas knew entering the game that Rice would not only present a myriad of different looks defensively, but would also commit resources to the line of scrimmage in an attempt to stop the running game.

Herman was keeping a close eye on his starting running back, too — he wanted to make sure that Ingram wasn’t being too hard on himself.

“He’s very self-critical, and every successful person in life that I know at least is very self-aware and self-critical,” Herman said the following Monday. “The challenge with him is obviously not letting two mistakes follow one. Not letting, ‘Hey, I missed the hole on this run, so now I’m thinking about it, and I missed the hole on the next run.’”

The coaching point for Ingram, and for every other player on the team, is that mistakes happen, but the mark of champions and elite players is that 0-1 doesn’t become 0-2.

As a result of the aggressiveness from Rice, Ehlinger sliced up the Owls on first down through the air throughout the game, with Ingram eventually showing flashes of his potential once again with 74 yards and two touchdowns. After the early struggles, Ingram responded to go 1-0 on a number of runs.

“He bounced back and wound up having a really good game for us, so I was really proud of him for that,” Herman said.

“Not only how he went about the week, but then to how the game started and then after those first couple of runs, he really bounced back and had one of his better games.”

With Ingram in a better space mentally, he was surely more receptive to the technical coaching points emphasized by the Texas staff heading into the conference opener.

“I think the biggest thing we tried to teach him was technically being patient. I thought he was really patient against Oklahoma State behind the line of scrimmage, and it’s the old adage, slow to the hole, fast through the hole.”

To help Ingram, the Horns scripted a play to get him into the flow quickly.

On the first play of the game, Texas lined up in a relatively unusual formation — for Herman’s offense — putting Ingram in the Pistol behind Ehlinger, providing the advantage of not tipping off the direction of a run and giving the running back a downhill start towards the line of scrimmage.

When the linebackers flowed too hard to the play side, the extra time afforded to Ingram by his deep starting depth allowed him to easily find the anticipated cutback lane before he finished the run with strong leg drive for some extra yardage.

At that point, Ingram said after the game, he felt comfortable.

That comfortability and strong blocking up front allowed Ingram to set his career highs with 21 carries for 114 yards. One particular run in the second quarter showcased Ingram’s ability to jump cut horizontally, then stick his foot in the ground and get up the field with explosiveness.

He also made a difference in the passing game with an impressive 26-yard catch and run early in the fourth quarter that helped set up a critical touchdown as Texas extended the lead to 36-23.

In terms of a single play revealing all of Ingram’s significant ability, it’s arguable that it was his highlight so far in burnt orange and white.

A juke, a spin move, and breaking several tackles. 26 played his best against OSU. A facemask moves Texas closer to the goal line. pic.twitter.com/iSo0RfzPLq

“I was just in an area of space,” Ingram said after the game. “I feel like I’m not the type of guy who needs a lot of space and you know, there was a little space everywhere, so they put the ball in my hands for a reason. It’s my job to go out there and execute.”

The career-best performance afforded Ingram a chance to talk to the media and address questions about his self-criticism.

“I have been told that before, but I feel like that’s just the type of guy that I am,” Ingram said. “I know what I can do, I know what I can bring to the table to help the team win, so that’s why I’m just so hard on myself.”

Ingram also said that he was getting close to 100-percent health. After mentioning twice that he felt like he’s getting his legs back underneath himself, Ingram offered that he was excited about getting his brace off the knee that suffered a bone bruise during a scrimmage in preseason camp.

He made it clear that he wasn’t a fan of the brace, but gave a politic answer when asked about it specifically.

“I’m just going to say the brace is off and leave it at that.”

Framing the question a different way allowed Ingram to admit that he felt “way different” against the Cowboys.

“Just get back to myself,” he said. “I don’t know how else to put it. I’m not going to make excuses — I’m not the type of guy who makes excuses. Just playing Keaontay football.”

The type of football that allowed him to rush for 79 career touchdowns on the ground and more than 2,500 yards over his final two seasons at Carthage. Oh yeah, and don’t forget those two state titles in 2016 and 2017 that Keontay football helped produce.

So excuse him for not getting caught up in any talk about the Oklahoma State game providing a turning point in his career.

“I wouldn’t call it a breakout game — getting started,” Ingram said. “Headed in the right direction.”

Moving forward, Ingram spoke in the voice of his coaches when asked about what it will take to repeat his career-high performance. It’s all about consistency and maintaining the same approach every week.

Against West Virginia, however, he’ll have a chance to build on his last performance without that pesky brace and with the confidence that he’s back playing Keaontay football once again.