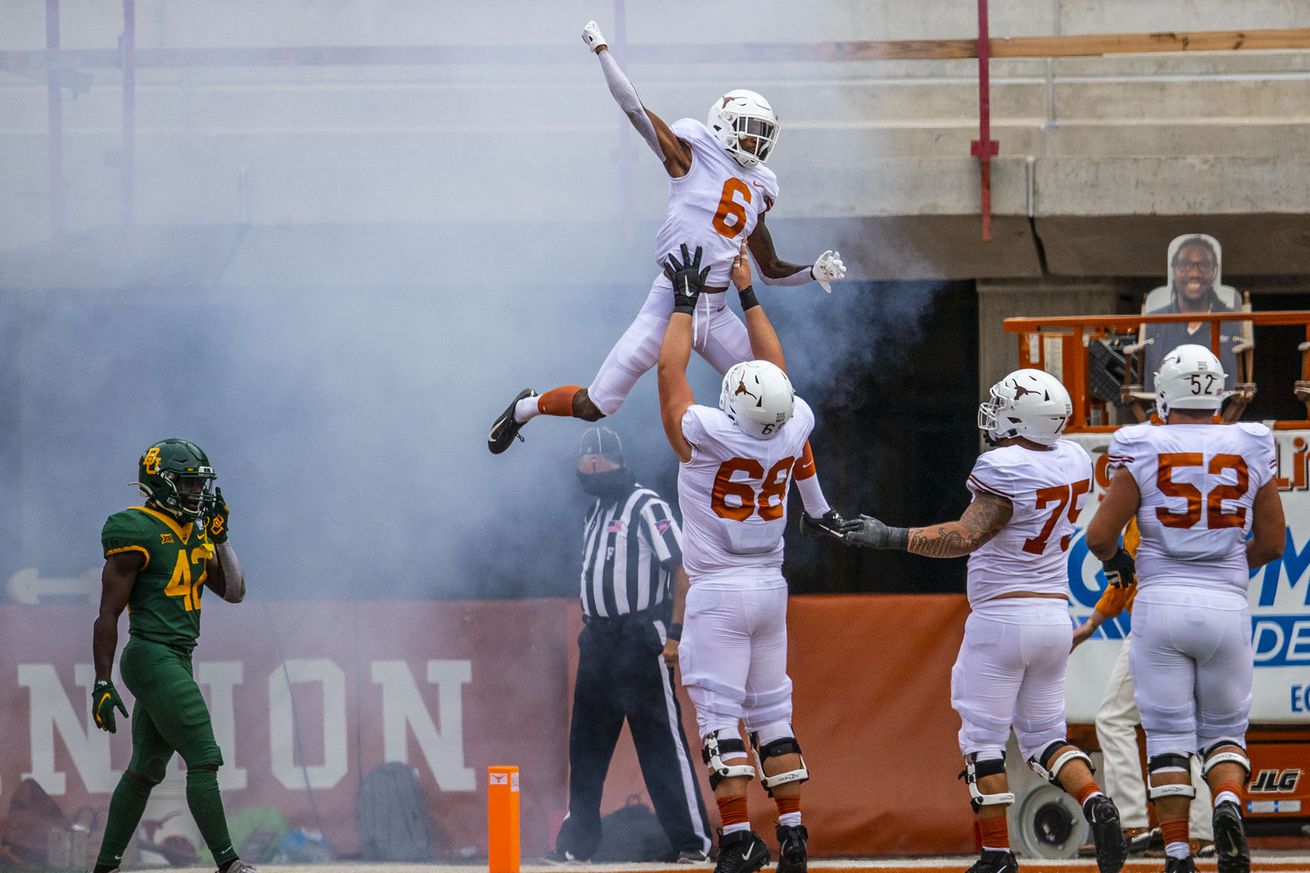 A slow start and a less-than-ideal finish bookended a performance that otherwise demonstrated some tangible improvement for a reeling program.

With the Texas Longhorns wearing white uniforms at Darrell K Royal-Texas Memorial Stadium for the first time in over 70 years to celebrate the 110th meeting with the Baylor Bears, Saturday’s 27-16 victory looked like the type of win expected from a program that entered the game with a winning percentage of over 71 percent against its in-state opponent.

It also came against an opponent that didn’t practice for 11 days after a mass COVID-19 outbreak following the road trip to West Virginia and had only played two games this season.

But after last season’s massively disappointing 24-10 loss in Waco and a 1-2 start in Big 12 play that could have easily been 0-3 or 3-0, the solid performance from Texas — and the uncontroversial post-game scene of the players remaining on the field for “The Eyes of Texas” — represented some much-needed improvement.

Several big mistakes late, including an interception by senior quarterback Sam Ehlinger that was late and underthrown and another personal foul penalty on senior center Derek Kerstetter, a four-year starter and team captain, allowed Baylor to hang around with two touchdowns in the fourth quarter, but overall, Texas largely eliminated the type of consistent mistakes that plagued the previous three games.

Since Baylor only played two games this season entering Saturday’s contest and offensive coordinator Larry Fedora hadn’t called a game in 13 years prior to the delayed season opener, the Texas defensive staff didn’t have much game film to study.

Senior defensive tackle Ta’Quon Graham said after the game that the Longhorns didn’t have much of an idea about which offensive linemen would actually be available for the Bears.

Even with that lack of information, developing a gameplan was relatively straightforward for coordinator Chris Ash — the poor offensive line play by Baylor in its first two games and the lack of arm strength possessed by Bears quarterback Charlie Brewer meant that the game would always be determined near the line of scrimmage and inside the hash marks.

Against an undermanned Baylor offensive line, the Texas defensive line was able to create seven tackles for loss and consistently pressure Brewer while giving up only 60 rushing yards.

Because the defensive front was able to win those battles without help from the secondary, Ash effectively schemed to provide his cornerbacks more support by mostly playing with two deep safeties. It’s a look that makes it difficult to produce opportunities in the vertical game even for a quarterback with the ability to push the ball down the field. Brewer could not. So the plan was to force underneath throws and then rally to the football.

It worked — Brewer needed 43 passes to rack up 243 yards, an average of six yards per attempt, and didn’t produce a touchdown until Texas had already taken a 27-3 lead on an Ehlinger touchdown run late in the third quarter.

There were some missed opportunities for the Longhorns defense, including three dropped interceptions, and junior Jack Joseph Ossai left with a shoulder injury late in the second half before returning with a brace, but overall the defense looked like a unit that benefited from the bye week and its increasing experience under Ash.

The trend of avoiding busted coverages continued, the tackling was solid enough that the struggles against Texas Tech are beginning to look like an outlier, and the emphasis on beating blockers at the outside linebacker positions appeared to pay some dividends.

Offensively, the Longhorns got off to a slow start as the first two drives only produced 26 yards and Ehlinger entered the second quarter with two pass attempts for negative yardage. The desire to run the football from 12 personnel eventually started paying off and opened up some opportunities in the passing game — over three key drives in the first half, Texas took control by scoring 13 points.

“Coming into the game we knew that we wanted to run the football,” Ehlinger said. “You know, it’s really important to be able to run the ball because you can control the game with your run offense. So we knew that, and then we just stayed at it, continued to chip away.”

Ehlinger ultimately attempted only 23 passes, the lowest number of his career in a game that he both started and finished. By comparison, Texas ran the ball 47 times, a number buoyed by the separation created in the second and third quarters.

Freshman running back Bijan Robinson earned his first start and was consistent with 12 carries for 55 yards, while junior Keaontay Ingram bounced back from his fumbling issues with an obvious focus on ball security and 16 carries for 57 yards. Neither player had a carry longer than 12 yards, but mostly avoided negative plays, an especially important development from Ingram after his impactful, consecutive fumbles.

“We have an endless amount of confidence in Keaontay — we know exactly what he’s capable of and the two fumbles don’t define what we think of him,” Ehlinger said. “I think he did a great job responding and bouncing back. Really proud of him.”

Even with the rather stubborn emphasis on the running game, it was actually two big passing plays that keyed the second-quarter surge for the Horns.

A busted coverage by the Bears left graduate transfer Tarik Black running free through the secondary and Ehlinger found him for a 72-yard gain that represented the longest play of Black’s career. It also earned him some ribbing from teammates after he was caught from behind after only managing a top speed of 16 miles per hour on the play.

The second big play was a 42-yard catch by redshirt sophomore Joshua Moore, who made an excellent effort on the contested catch to set up his three-yard touchdown catch.

Moore’s touchdown also preceded a key drive to open the third quarter because Baylor received the ball to open the game, so Texas had an opportunity to reverse a developing narrative about third-quarter struggles — in the first four games, the Horns were outscored 38-14 in the third quarter.

The Longhorns responded with an 11-play, 75-yard drive that included two third-down conversions and finished with a one-yard run by Ehlinger, who showed off his toughness as a runner throughout the game as the Bears consistently hit him hard, but couldn’t stop him.

“I wish I could tell you that there was some magic thing that we did. There wasn’t. We made an emphasis on it. In my opinion, once is an anomaly, twice is a coincidence, and three times is a pattern. So there was definitely a pattern there. We wanted to make our guys aware of that,” Herman said of the third-quarter drive.

“Roschon Johnson gave a very impassioned speech — I call it a speech, 30 seconds, whatever it was — reminded our team in the locker room before we headed out for the third quarter. He reminded them of the emphasis that we’d been placing on it and again, really proud of the way our kids responded.”

Texas added another touchdown in the third quarter to open up a 27-3 lead. Baylor responded with Brewer’s best drive of the game as a passer and was able to score after Texas junior linebacker DeMarvion Overshown failed to come down with an interception near the goal line.

On the ensuing drive, Ehlinger made his biggest mistake of the game throwing an interception, a play that was perhaps influenced by an injured calf — Ehlinger briefly went into the medical tent and needed assistance keeping it loose after he took a helmet to the area.

Regardless, the interception return set up another Baylor touchdown and it looked like Texas was once again needlessly pressing the hard button, but subsequently won the field position battle, stopped the next Bears drive, and then finished the game with a six-play, 17-yard effort that took the final 2:19 off the clock.

“Winning does cover up a lot of mistakes that we have to get cleaned up if we want to continue to get better, but it’s a lot better to be talking about mistakes when you win than when you lose,” Ehlinger said.

More than that, the win relieved pressure on its increasingly embattled head coach, the post-game scene for The Eyes of Texas gave fans the vision of unity they demanded, and the team overall looked like it played with more confidence and less hesitation with the extra repetitions afforded by the bye week.

“I think the one was huge for us getting that confidence back,” Ehlinger said. “We made a decision as a team to stand out and sing The Eyes and so moving forward, I would assume that’s what it’s going to be.”

As the practice performances heralded by Herman for weeks finally started to show evidence of translating to the field, Ehlinger sounded like his head coach in pointing out that the results for this team are still primarily controlled by the team in burnt orange and white. For better or worse.

“I think over the past few games we’ve shown that we’re capable of pretty much anything, whether that be good or bad,” Ehlinger said. “We know that and we know that’s in our control. So we’ve just got to get back to work and eliminate mistakes, play clean football, and when we stay out of our way we’re pretty darn good.”

With a road trip to Stillwater to face Oklahoma State looming next week, the question remains whether this Texas team can stay out of its own way consistently enough to revive its outside shot at a Big 12 title and extend the Tom Herman era.

A reasonably decisive win against an overmatched Baylor team in the midst of a coaching transition and with little game or practice experience doesn’t provide a ton of perspective on that question, but it’s also unfair to the Texas coaches and players to completely disregard the tangible improvement this week.

If winning is really, really hard, it might as well be a very, very big relief, too.