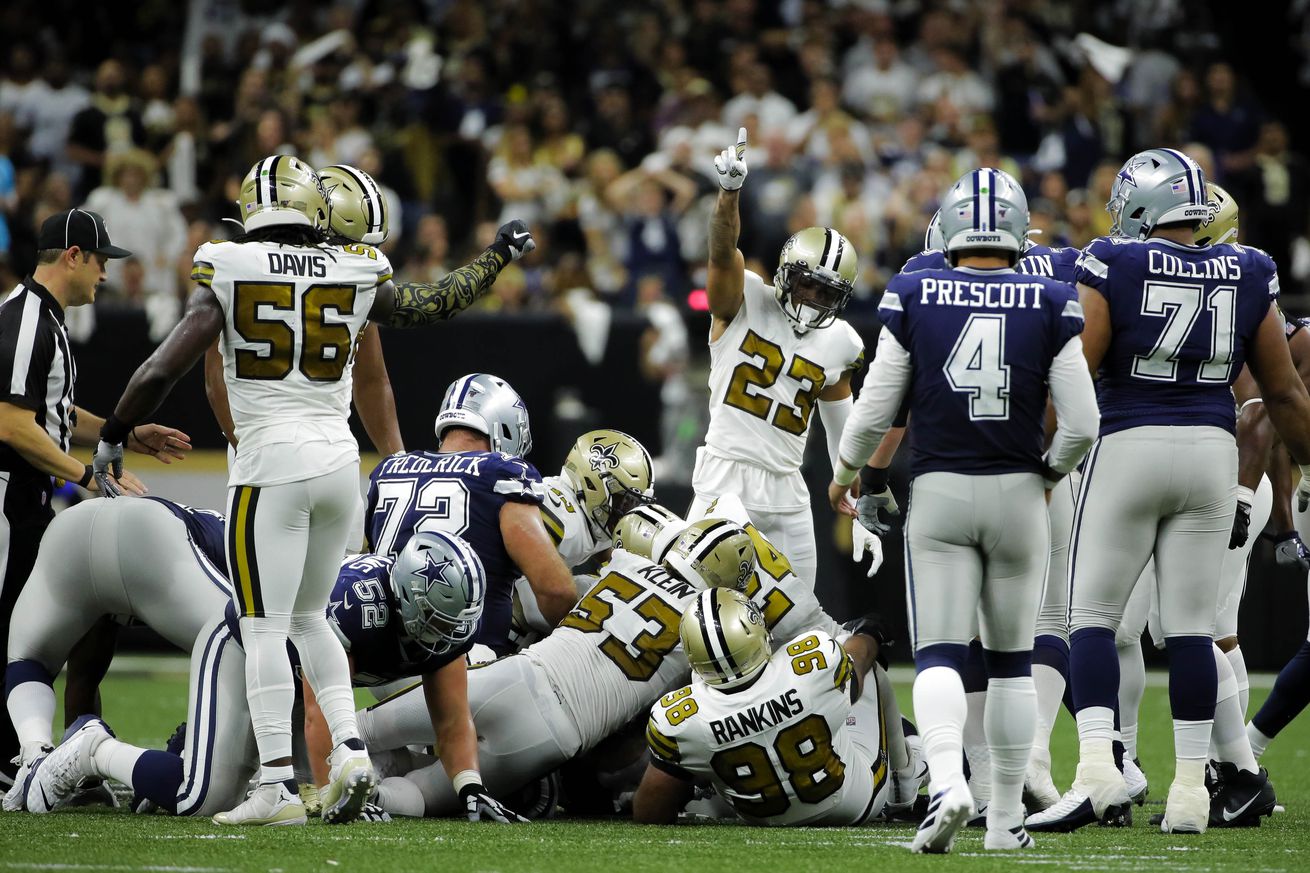 Dallas falls to 3-1 this season.

Cowboys suffer first loss at the hands of the Saints, 12-10 – Tom Ryle, BTB

Sunday was a different story than the first three weeks of the season.

But outside of that third quarter touchdown drive, the offensive magic deserted Dallas. Kellen Moore looked disturbingly like Scott Linehan as he repeatedly ran the ball on first down, with the same lack of success we saw last year. The Saints’ secondary did a superb job, especially Marshon Lattimore, who absolutely blanked Amari Cooper. Prescott was also off, and outside the pass to Jarwin, was not taking shots down the field, which also hearkens back to the frustrations of last year.

The passing game wasn’t working, and Elliott was a non-factor. On the other side of the ball, Alvin Kamara was effective, especially as time was running out when Sean Payton just kept feeding him the ball and he kept moving the chains.

Turnovers killed two Dallas drives, and both were fumbles from players you don’t expect to see lose the ball. First, Jason Witten caught a pass that looked like it was about to get something started in the second quarter, but the ball was punched out from behind. Then later in the quarter, Elliott lost the ball just before he was down as he was fighting for a first down. It was a particularly close play that could have gone the other way, but there were several calls during the game that were questionable, and the Cowboys really came out on top of as many as they lost.

To call the game a defensive struggle is an understatement.

We’re not used to the idea that a game featuring the Cowboys and Saints might struggle to reach double digits in scoring.

But either the offenses are listing in the first month of the season, or the defenses on both sides have made significant improvements.

The Saints snuck out a 12-10 win on Sunday, improving to 3-1, without scoring a touchdown.

But it wasn’t easy, or pretty.

Watkins gives five thoughts on the game — including on how one call could have changed the game.

It was early in the game, in the second quarter, but Jason Garrett made a questionable decision that worked when he elected to go for it on fourth-and-1 from his 43. It appeared as if Elliott got the first down by stretching through a hole, but safety Vonn Bell stripped him as he was about to go down. You could question the call, but it worked if not for the fumble. The Saints converted a field goal as a result of the turnover.

If there was one bright spot, Robert Quinn was outstanding.

Whenever Tyrone Crawford returns from his hip issues, it might be best if he comes off the bench. Robert Quinn has been fantastic in his two games as the starter. Quinn had two sacks, a pass breakup and numerous pressures against the Saints. He just brings so much juice to the pass rush and this isn’t anything against Crawford, who is a solid defensive end who can also play defensive tackle. Quinn’s best sack came in the fourth quarter, when he beat left tackle Terron Armstead badly to get Bridgewater on a third down.

The Cowboys just did not look good at all versus the Saints.

For the first time this season the Dallas Cowboys ran into a good team. The good team punched the Cowboys in the face, and shoved a schooner of Humility right down their throat.

And ponder how this game would have looked had the Saints had quarterback Drew Brees rather than Teddy Bridgewater playing quarterback?

With Brees in there, he is not sacked with less than two minutes remaining in the game on a third down that led to a favorable punt to give the Cowboys a last-minute shot to win.

The Cowboys may end up being the best team in the NFC in January, but right now there are other teams ahead of them. Beating the Giants, Redskins and Dolphins is good for a warm cup of “Who Cares?”

The most troubling element to the Cowboys’ loss in New Orleans isn’t the defeat itself. It’s the way they lost.

The Saints used virtually the exact same plan to counter the Cowboys as the L.A. Rams did in the NFC Divisional playoffs back in January.

Cowboys’ offense has no answers, regresses in loss to Saints – Todd Archer, ESPN

The Cowboys simply had no answer for what the Saints threw at them on Sunday night.

The Cowboys entered the game with the NFL’s fourth-highest scoring offense (32.4 points), were third in yards (481.3 yards) and first in third-down offense (58.1 percent).

They scored one touchdown on nine possessions, gained 257 yards and converted four of 11 third downs.

Despite all that, the Cowboys had a chance for game-winning drive with under two minutes remaining. But it ended up like the rest of the night: too many mistakes and a Prescott interception on the final Hail Mary attempt.

It wasted the best defensive effort of the season by the Cowboys even if New Orleans was starting backup quarterback Teddy Bridgewater.

The only time the Cowboys offense looked like a semblance of itself in the first three games came on the opening possession of the second half when they went 84 yards on 11 plays and gained as many first downs on that drive (six) as they had in the first half.

The vaunted running game was held in check with Ezekiel Elliott getting 35 yards on 18 carries, and the Cowboys turned it over three times with Elliott and Jason Witten fumbling and Prescott’s last-gasp chance picked off.

How do the Cowboys respond after scoring 22 points less than their season average?

The New Orleans Saints issued quite a statement in knocking off the previously undefeated Dallas Cowboys 12-10 at a raucous Mercedes-Benz Superdome on Sunday night, showing that they have more than a pulse while playing without their iconic-but-injured quarterback.

Defense was clearly the ticket as the Saints (3-1) throttled reigning NFL rushing champ Ezekiel Elliott, disrupted quarterback Dak Prescott and put the clamps on one of the league’s hottest offenses.

The Cowboys (3-1) came to the Superdome averaging 32 points per game.

They left with a reality check as Elliott was held to 35 rushing yards (1.9 per carry), the Cowboys mustered just a touchdown and a field goal and didn’t even crack 300 yards (257) against a determined defense that was more than willing to pick up the slack while Brees recovers from thumb surgery.

More love for Robert Quinn, who stood out on an otherwise forgetful night for the Cowboys.

A positive for the Cowboys? Robert Quinn

Defensive end Robert Quinn finished Week 3 with a sack and a career-high seven quarterback pressures against his former team, Miami. He again came up big when the Cowboys traveled to New Orleans to face the Saints.

He had two sacks, including a big stop on a crucial third down near the midway point of the fourth quarter where Bridgewater and company were approaching Cowboys territory.

He has even become one of the team’s biggest cheerleaders.

One of the biggest turning points of the Cowboys loss was Jason Witten’s fumble after Dak Prescott hit the veteran tight end for a first down on third down.

Cowboys tight end Jason Witten has long been the team’s Mr. Reliable. He makes few mistakes. He is always where is supposed to be. He is a coach the field. Yada, Yada, Yada.

But typifying the team’s struggles on offense in the first half was a 16-yard pass to Witten on 3rd and 4 by quarterback Dak Prescott.

It would have given the Cowboys a first down and some momentum but A.J. Klein knocked the ball out of Witten’s arm from behind and the Saints recovered.

It was Witten’s first lost fumble since Week 15 in 2016 against Tampa Bay.

It was just the 9th fumble of his 16-year career, just the sixth lost fumble.

Luckily, the defense forced a punt. But it was typical of the team’s play on offense all night.

The team needs to regroup quickly, though, because Aaron Rodgers and the Packers are coming to town.

UP NEXT: GREEN BAY PACKERS

The Green Bay Packers (3-1) and noted Cowboys killer Aaron Rodgers will travel to at AT&T Stadium next Sunday.

The Packers are coming off their first loss of the season, a 34-27 setback to the Philadelphia Eagles last Thursday. They will play the Cowboys after a 10-day layoff to lick their wounds but they could be without No. 1 receiver Davante Adams, who suffered a toe injury against the Eagles.

As if the game wasn’t already bad enough … yikes.

The Dallas Cowboys had their first loss of the season in New Orleans… it was ugly.

Among the many bad things that happened to Dallas in the Big Easy was that their star left tackle, Tyron Smith, left the game (near the end of it, salt in wound) with what looked like an injury. Smith has had injury issues over the last few years but they’ve mostly been related to his back. While we don’t know what he’s dealing with, NFL Network spotted him leaving the game on a cart.

Jerry Jones just classified Tyron Smith as a “high ankle” situation, although he didn’t have a ton of info other than that.

The Dallas Cowboys lost for the first time this season, and we talked about it. It’ll be okay.