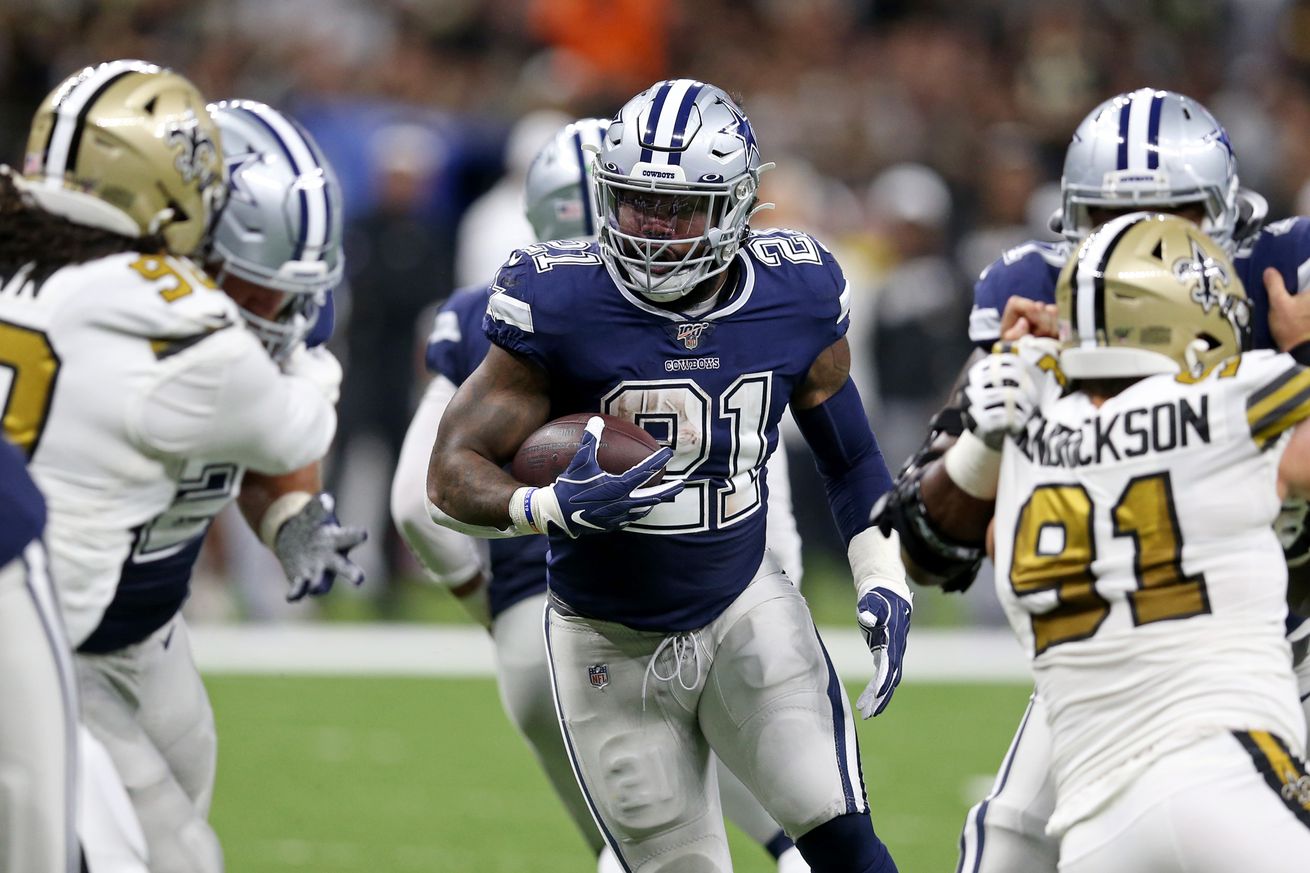 The Cowboys’ star running back is looking to bounce back from his poor outing in a big way against the Green Bay Packers on Sunday.

Elliott’s 35 yards were the third fewest he has gained in a game in his career. He followed up his 8-yard outing against the Denver Broncos in 2017 with 80 yards and a touchdown on 22 carries in a win against the Arizona Cardinals. In 2018, the Washington Redskins limited him to 33 yards on 15 carries, which was followed by 61 yards on 17 carries in a loss to the Tennessee Titans.

Randall Cobb, who Dallas Cowboys head coach Jason Garrett called a Cowboys ‘pain in the ass’, will face his former team for the first time on Sunday.

Cobb, who faced the Cowboys four times as a member of the Packers and averaged 6.8 catches and 69.8 receiving yards per contest, understands the nature of the compliment. He also knew that eventually, the media would corral him for Packers-Cowboys talk as it relates to Dez Bryant’s fourth-down catch being overturned in the 2014 playoffs.

“I was waiting on that (Dez Caught It question,” Cobb said, laughing. “I’ve been getting that a lot since I’ve been here. We didn’t know what the rules were back then. It’s probably a catch nowadays.”

On Sunday, Cobb will attempt to be a pain in the ass of his former team as the Cowboys play host to the Packers in a matchup of two of the NFL’s marquee franchises. Green Bay didn’t make Cobb an offer when he reached free agency in March; its simple believe was that injuries were starting to take their toll on the 5-10, 195-pound receiver, who turned 29 this summer. … and that his spectacular 91-catch, 12-touchdown season in 2014 was well behind him.

WR Amari Cooper Must Bounce Back Against A Strong Packers Pass Defense – Kevin Brady, Inside The Star

If the Cowboys want to beat the Packers on Sunday, they need Amari Cooper to be like the guy he was weeks one through three, not the one he was last Sunday.

Amari Cooper has to bounce back this week in order for the Cowboys to get a much-needed home win over a quality NFC foe. But based on the numbers, it won’t get any easier for Cooper and the Cowboys when the Green Bay Packers come to Arlington.

Through three weeks, the Packers defense looked like one of the best in all of football. They had completely shutdown the Bears in their opener, held the Vikings to just 16 points during their week two victory, and then abused Joe Flacco en route to a 3-0 start.

On Thursday night, however, the Philadelphia Eagles found a lot of success in Green Bay and earned a 34-27 win. Still, much of what the Packers allowed to the Eagles was on the ground, and Green Bay’s pass defense still remains one of the best by DVOA in the league.

Kellen Moore took a ton of heat for his play calling Sunday, but could Dak Prescott’s performance had an impact on this?

Dallas quarterback Dak Prescott took 18 snaps from under center and 39 in the shotgun. Prescott has been in the shotgun more snaps than under center in every game so far this season, but there has been much more balance in previous games (32-34 against the Giants, 32-36 in Washington, and 32-39 versus the Dolphins.)

The real issue with how the formations are utilized is not so much whether they are in the shotgun more than under center, or vice-versa, but whether it becomes obvious that the offense is going to run from under center and pass from the shotgun. Former offensive coordinator Scott Linehan was justly criticized for being too predictable. He almost always called passing plays from the shotgun and called mostly running plays when the quarterback was under center.

I have been tracking the basic stats in these articles since Prescott was a rookie. Full disclosure: I do not have my notes from the last eight games of the 2018 season. That being said, I do have complete stats for 44 of Prescott’s 52 regular-season games, and nothing about the final eight games of 2018 suggests there was any major deviation from the trends identified. Moreover, the data from this season corroborates the observations noted in the other 40 games. The most glaring trend detected is that Prescott is rarely asked to drop back and pass after taking the snap from under center.

In 44 games, he has never dropped back and passed after taking the snap from under center more than three or four times in game. When he was a rookie, it was sometimes never and often only once a game.

Through the first four weeks of the season, right tackle La’el Collins has been the best lineman on the star-studded Dallas offensive line.

After a year where Collins was often one of the weak links on the Dallas OL, he’s exceeded everyone’s expectations, as he’s been the team’s best offensive lineman through the first month of the season. In 2018, Collins gave up nine total pressures (one sack, one QB hit, seven pressures) over the first four games. This season, Collins has only given up three total pressures, per PFF.

Making Collins’ performance this season even more impressive is the fact that he’s executing at a high level against pass rushers who gave him a lot of trouble in the past. In Week 2, Collins faced Washington pass rusher Ryan Kerrigan, who consistently got the better of Collins in their matchups. Kerrigan is a powerful rusher with intricate hand technique, but Collins stymied him all afternoon. Kerrigan did finish the game with a sack, but that was because a Connor Williams missed blocked forced Prescott to retreat into Kerrigan’s arms, who was expertly pushed passed the pocket by Collins.

Cam Fleming is no stranger to stepping up in big spots,

Fleming might not be the same as Smith, but he’s been in the NFL for six years, starting 23 games in the regular season and three more in the playoffs, including a Super Bowl for the Patriots during the 2017 season.

Fleming had to start three games for Smith last year with the Cowboys, including the 13-10 win over the Saints later in the season. “I was glad I was able to help the team get a couple of wins last year,” said Fleming, who also started in wins over the Redskins and Giants last year. “Hopefully I can do the same thing this year.”

Of his 23 career starts, Fleming has helped his teams to a 19-4 record, mostly occurring with the Patriots. The Cowboys had both of their starters out of practice Wednesday as La’el Collins is dealing with back issues. Left guard Connor Williams had to slide to right tackle for practice and was replaced by veteran Xavier Su’a-Filo at left guard. However, Collins is expected to practice Thursday and should be ready for this week’s game.

Nemesis: QB Aaron Rodgers– Aaron Rodgers is one of those rare quarterbacks who can carry his team to victory on his own. He is always in the game regardless of the score. The more dire the situation, the better he plays. Jason Garrett calls it a “relentless spirit,” and it’s what fuels Rodgers when he lines up. His passion to compete comes through in every snap. He and Tom Brady are two of the most mentally tough quarterbacks the Cowboys will face all season. He will take shot after shot and continue to hang in there delivering the ball.

Rodgers is at his absolute best when he can get in the flow of a game. For years he has used hard counts, quick snaps and fake spikes to his advantage. He is the master of the “Hail Mary” and the free play off the defensive offsides. It’s common for him to catch too many men on the field. He can cause sideline chaos if he gets a feel for how you’re attempting to substitute. The Cowboys have to be ready to get players on and off the field quickly when the play ends.

Rodgers can be extremely dangerous when he’s throwing the ball on the move. Russell Wilson and Pat Mahomes come to mind when I think of quarterbacks that have this type of ability, but Rodgers will surprise you with his athletic ability. Even with a less than perfect knee he will escape when he has to. He can be a nightmare when he breaks the pocket. You have to pounce on him if he makes a mistake. That’s the best way to defeat him.

Who’s the best team in the NFC? We discuss on the latest episode of The Ocho.