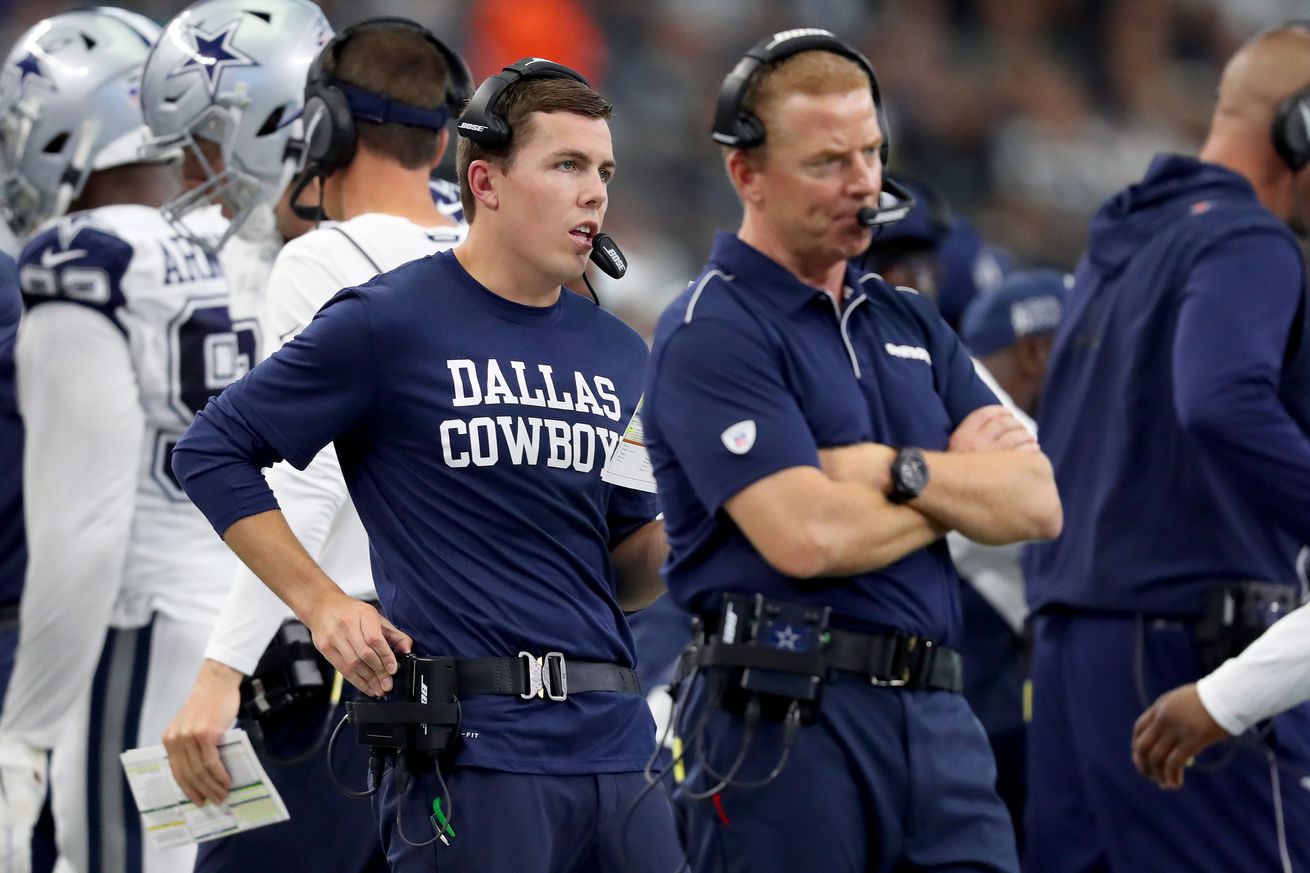 This was the kind of outing that puts it in perspective.

The Dallas Cowboys couldn’t beat a team that couldn’t score a touchdown.

Couldn’t live up to the increasing hype about being a legitimate Super Bowl contender.

In falling at the Superdome 12-10 on Sunday night, the Cowboys served up a primetime message that just might put their often-obnoxious fan base in check. In other words, it’s about time to pump the brakes on any Super Bowl-or-bust bandwagon business.

The Morning After: Cowboys offense emerges from New Orleans with work to do – Bob Sturm, The Athletic
Count Bob Sturm among those also not impressed.

This type of matchup, against a team that has been where the Cowboys aspire to be — the host of last year’s NFC Championship Game and a whisker away from another Super Bowl — would challenge Dallas in a way few other teams and settings could. In fact, I would suggest there are some similarities to two games in particular from the stretch drive of 2018:

November 29, 2018: Dallas beats New Orleans 13-10. In this game, Dallas, the home underdog, controlled the ball by keeping the opponent off the field and frustrated with over 36 minutes of possession. There was next to nothing of consequence in the visitor’s ground game, a difficult night on third downs and the Cowboys found an important takeaway late in the game to secure the upset. Even for the victors, Ezekiel Elliott ran 23 times for 76 yards for 3.3 yards per carry.

January 12, 2019: Los Angeles beats Dallas 30-22 in the NFC Divisional Playoffs. On this occasion, the Cowboys confidently strolled into an NFC power’s home stadium and tried to kick a quality defense right in the teeth with a series of power runs, attempting to win with some form of “bully ball.” While this often recalls the warm and fuzzy feelings of the 1990s dynasty, it went about as you might expect against Aaron Donald and Ndamukong Suh, as the Rams held the ball for over 36 minutes of possession, limited the Cowboys to just 2.3 yards an attempt and Elliott to 20 carries for 47 yards (2.4). Third downs did not come to the rescue, nor did a defensive effort that could not get a stop of consequence.

Let’s compare those battles against the two powers in the NFC title game last year – who are perhaps the favorites to return – to Sunday night’s game. The Cowboys endured the home team holding the ball for over 36 minutes of possession and stopping everything Dallas tried to do on the ground, as New Orleans conceded just 2.3 yards per attempt on the ground and a night for Elliott that included 18 runs for 35 yards (1.9), capped off with a negative night on third downs and in the turnover margin.

In other words, there is a pattern here that had little to do with one team playing without its starting quarterback.

Where Have All the NFC’s Elite Teams Gone? – Robert Mays, The Ringer
Robert Mays didn’t like any of the alleged NFC powerhouses.

The Cowboys, Rams, and Packers all fell from the ranks of the unbeaten, and they all showed serious flaws in the process. Through the first three weeks of the season, Dallas looked like the class of the NFC. The Cowboys comfortably led the league in offensive DVOA, and Dak Prescott seemed poised to have the best season of his career within first-year play-caller Kellen Moore’s wide-open, play-action-heavy scheme. But in Sunday night’s 12-10 loss to New Orleans, all those open receivers and massive running lanes disappeared. Prescott threw for 223 yards on 33 attempts while running back Ezekiel Elliott averaged just 1.9 yards per carry. For Moore, Prescott, and the red-hot Dallas offense, the loss was a reminder of just how difficult it can be to walk into a hostile road environment in prime time and face a veteran defense filled with high-end talent. Saints Pro Bowl cornerback Marshon Lattimore has had a trying year so far, but he turned in his best performance of the season while checking Amari Cooper. And even without Drew Brees under center, the Saints showed that a trip to the Superdome can still be a headache.

FMIA Week 4: Re-Organizing the NFL Power Rankings After an Odd Sunday – Peter King, ProFootballTalk
Peter King, however, puts things in perspective at the quarter mark of the season, keeping the Cowboys among his top five teams.

5. Dallas 3-1 (May ranking: 16). The loss at New Orleans doesn’t bother me much. It was a quicksand game for the offense, with nine possessions and only one gaining more than 35 yards, and Ezekiel Elliott the most pedestrian he’s looked all season. Too many pluses here in the first month to get overwhelmed with a road loss to a very good team. Also: Offensive coordinator Kellen Moore has been revelatory, adding an element of imagination to the Dallas play-calling that has brought out the best in Dak Prescott. After a month, the Cowboys have morphed from the only contender-type with a running back as the most valuable player to now Prescott and Zeke Elliott being equally important to the cause, or perhaps Prescott the more significant one.

NFL: Dak Prescott pass into quadruple coverage made for hilarious meme – Andrew Joseph
A willingness to laugh at yourself when things don’t go well is a sign of strong character. In that spirit let’s laugh at the fun some had at the Cowboys’ expense.

The Dallas Cowboys came up short on the final drive of Sunday’s 12-10 loss to the New Orleans Saints. But they did provide NFL fans with one of the season’s great memes.

In that final drive, Dallas took over possession with just under two minutes to go and no timeouts, which ultimately had Dak Prescott taking deep shots to get into field-goal range.

On 2nd and 20 from their own 26-yard line, Prescott targeted Amari Cooper on a deep ball that fell incomplete. The pass was thrown right into quadruple coverage, and Cooper still nearly came down with the ball.

How the heck do you lose a game when your defense doesn’t give up a touchdown for the second week in a row, only the third time that’s ever happened in back-to-back games in franchise history, and the first time in 17 years they’ve lost a game when keeping an opponent out of the end zone?

Oh, but there is more.

Like with four seconds to play in the first half, with the Saints first-and-goal at the 1, Saints head coach Sean Payton calls for a quick out to his tight end Jared Cook. Basically a two-step drop for quarterback Teddy Bridgewater and throw. Throw goes well over Cook’s head, sailing way out of bounds incomplete. Only two seconds run off the clock. Two! Replays show the clock started late and stopped before the ball hit the ground.

All causing Cowboys head coach Jason Garrett, who complained vehemently to the officials as the half ended, to call it “one of the fastest plays in NFL history.” Must have been, leaving the Saints enough time to kick a field goal. Three points.

The Cowboys lost by two.

Kellen Moore’s chores: After first month, Cowboys OC still has some things to figure out – Tim Cowlishaw, DallasNews.com
Kellen Moore was the toast of the analytics gurus out there as well as anyone else who covers the NFL. Until Sunday night; now he’s just another coordinator being questioned by any and all.

In a span of 72 hours, we went from thinking the Cowboys might have a three-game lead in the division to realizing that nothing at all has been achieved in the first four weeks. Philadelphia trailed Green Bay 10-0 in the second quarter Thursday night before unleashing its own ground game while shutting down the Packers’ running attack in a 34-27 Eagles win. That kept the Eagles from starting the season 1-3 and burying themselves in their own second-guessing.

Fast forward to Sunday night in the Superdome where Ezekiel Elliott was dialed up time after time and produced a longest run of six yards. With 18 carries for 35 yards, another paltry 30 yards on six catches, the NFL’s highest paid running back never got on track behind the NFL’s highest paid offensive line. How does such a thing happen?

3 takeaways from Cowboys-Saints, including questionable play calls and a disconcerting Ezekiel Elliott trend – John Owning, DallasNews.com
John Owning likes video and numbers and offers both in his 3 takeaways.

Coming into the game, Prescott had been outstanding using play action, going 30 of 37 (81.1% completion rate) for 409 yards (11.1 YPA), four touchdowns and an interception. He was tied for the NFL lead in touchdown passes off play action, third in completion percentage and passing yards, fifth in YPA and sixth in passer rating (137.5).

But there was a drop-off in usage Sunday night, when the Cowboys used play action on just seven of Prescott’s 35 dropbacks (20%), according to Pro Football Focus — the lowest single-game play-action rate for Dallas this season. On those seven dropbacks, Prescott went 6 of 7 for 65 yards (9.29 YPA). This means he went 16 of 26 for 158 yards (6.08 YPA) on passes without play action.

So, not only was Prescott more accurate off play action (85% vs. 61% completion rate), but he also moved the ball farther downfield (9.29 vs. 6.08 YPA). Despite the fact Prescott was more efficient with play action leading up to and during the Saints game, Moore opted to use it less than he had in the first three weeks, which is odd considering New Orleans is the best opponent Dallas has faced by far.

Moore simply got away from the things that made the Cowboys successful up until this point, and the offense suffered because of it.

Roundup: Cowboys’ Tyron Smith (ankle) out for Week 5 – Staff, NFL.com
Last we saw Tyron Smith he was being helped to the locker room with a worrisome leg injury. The news wasn’t as bad as it could have been but the talented left tackle will miss some time.

The Dallas Cowboys received good news on star left tackle Tyron Smith’s sprained ankle suffered late in Sunday’s loss to the Saints. NFL Network Insider Ian Rapoport reports that Smith might only miss one week due to the injury.

Head coach Jason Garrett confirmed during his press conference that the initial tests on Smith were “favorable” and that he’s considered “week-to-week.”

Smith already has been ruled out for this Sunday’s game against the Packers, per Rapoport, but he has not been ruled out for Week 6 against the Jets. Jerry Jones told reporters after the Saints game that Smith was dealing with a “high ankle” situation, but Rapoport reports the injury does not appear to have the standard 4-6 week timeline associated with high ankle sprains.

Kavon Frazier’s season is over.

The fourth-year safety injured his pectoral on Sunday night in New Orleans, and Cowboys coach Jason Garrett confirmed Monday that the injury is going to end his year.

“Kavon is going to have surgery tomorrow,” Garrett said. “We anticipate putting him on IR and him being out for the year.”

The safety position has been a problem spot since the season started, and it doesn’t figure to change. In addition to Frazier’s injury, Xavier Woods also appeared to hurt his shoulder and will bear monitoring.

It’s a tough blow for Frazier, who is in the final year of his rookie deal. The Central Michigan product was drafted in the sixth round in 2016 as part of the same draft class as Ezekiel Elliott and Dak Prescott. He’s now set for unrestricted free agency when the season is over.

Clocking in with total audience of 24.7 million over both linear TV and digital platforms, last night’s SNF is the most watched Week 4 airing of NBC’s flagship NFL show ever. With the primetime showing and eyeballs on NBC Sports Digital, and NFL Digital platforms, last night’s season hugh Total Audience Delivery was up 35% over the Week 4 SNF for the 2018/2019 season when the Baltimore Ravens beat Pittsburgh Steelers 24-14.

There are still reasons to have faith in the Cowboys. We discuss them on the latest episode of The Ocho.