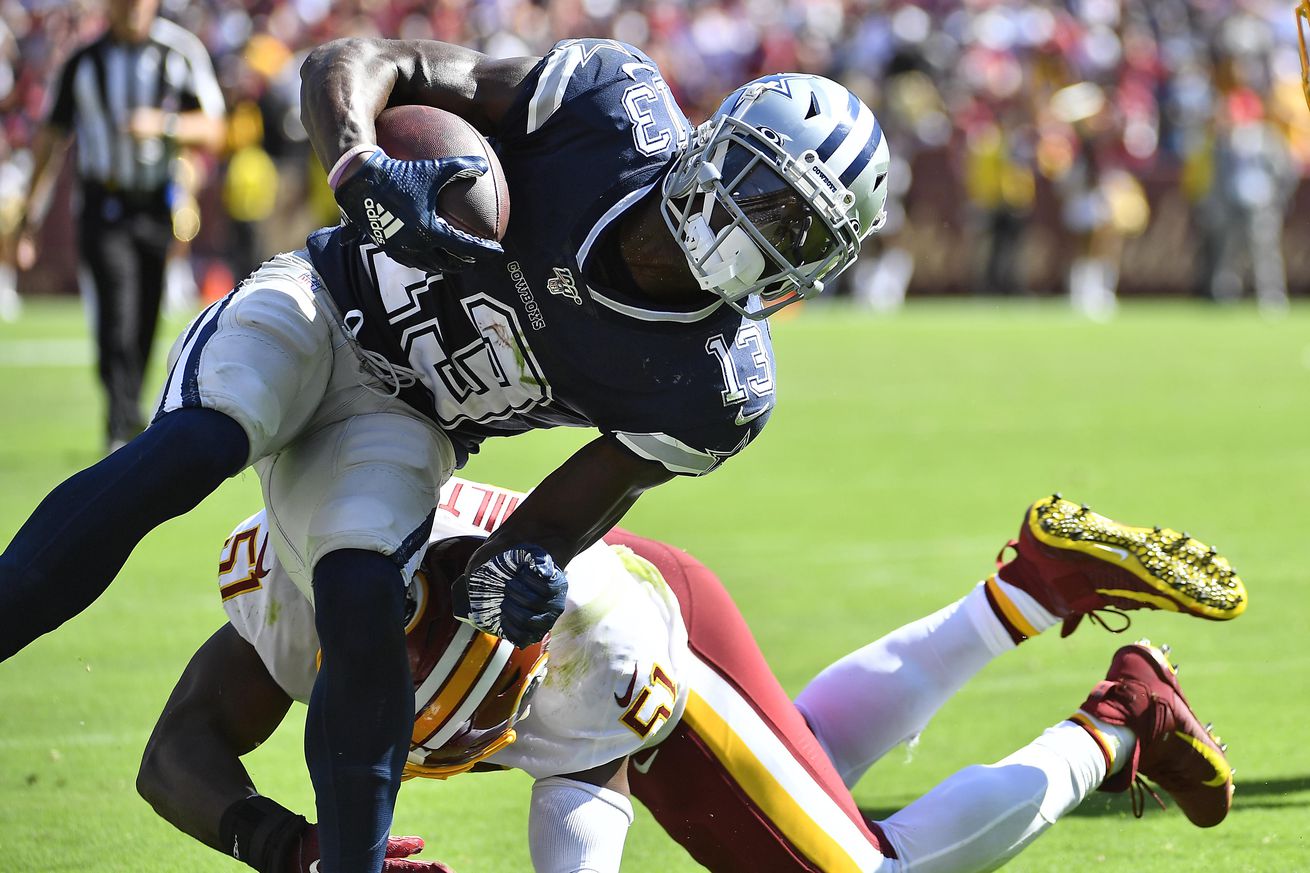 The Cowboys get a boost, and the Packers get hit with a big blow for Sunday’s matchup.

As it stands, Michael Gallup is cleared to get back to the business of dominating on the football field. The second-year wide receiver missed the last two games with a slightly torn meniscus that required arthroscopic surgery to repair, setting his timeline for return to the Dallas Cowboys of somewhere between 2-4 weeks.

He’s now right in the middle of the timeframe and returned to practice on Wednesday in a limited capacity, but suffered no setbacks and went on to participate again on Thursday and to close out the week on Friday. Gallup insists he feels as good as he did before suffering the injury in the waning moments of the 31-21 win over the Washington Redskins in Week 2, and that’s great news for a Cowboys team that saw him average 113 receiving yards per game before being sidelined.

Gallup has established himself as the dynamic deep threat opposite three-time Pro Bowl wideout Amari Cooper, and his absence was felt when the New Orleans Saintsdefense stymied Dak Prescott and the usually high-powered receiving corps in Week 4. Given his progress this week, it’s expected Gallup will play against the visiting Green Bay Packers, his speedy recovery coming in time to help the Cowboys avoid a two-game slide.

Unfortunately for the Packers, wide receiver Davante Adams will sit after having now been officially ruled out with turf toe, and that’s a hefty blow to an offense that can’t run the ball and hasn’t shown an ability to stretch the field outside of what Adams has done this season. Without the team leader in receiving yards, someone else will have to step up big and help Aaron Rodgers.

Expert predictions for Packers-Cowboys: Can Dallas get back to its winning ways against Green Bay? – SportsDay

The SportsDay writers give their predictions for Packers at Cowboys.

The Cowboys don’t face Aaron Rodgers all that often. It’s for the best. The Packers quarterback has only lost to Dallas once in his career. He’s knocked them out of the playoffs twice in the last five years. Why would Sunday be any different? Well, the Green Bay offense isn’t at full strength around Rodgers. And a Cowboys team that once struggled at home is now 19-7 at AT&T Stadium with quarterback Dak Prescott.

Randall Cobb has a big game against his former team as the Cowboys offense returns to its dynamic ways after going on vacation last week. The Cowboys defense continues to bend and not break, leading to a plethora of Mason Crosby field goals. A late TD drive puts the Cowboys on top, as the defense finally stops an Aaron Rodgers-led offense at the end of regulation.

IS THE COWBOYS OFFENSIVE LINE STARTING TO BREAK DOWN? – Jess Haynie, Inside the Star

Is it time to start worrying about the Cowboys offensive line?

It may sound strange to talk about age since Tyron Smith, Travis Frederick, and Zack Martin are all still just 28 years old. But that’s where mileage comes into play; all of these guys have been full-time starters since the moment they entered the NFL.

2019 marks Smith’s ninth season in the pros. This is Year 7 for Frederick and Year 6 for Martin. They have all started in every game they’ve played since being first-round draft picks. And unfortunately, that wear-and-tear is starting to show.

Tyron has missed three games in each of the last three seasons. He is expected to be out this Sunday against the Packers, though for an acute ankle injury and not the more chronic neck,back, and shoulder issues.

Zack missed two games last year for the first time in his career. He has been struggling with back issues all year so far in 2019, having to leave one game already due to some brief complications.

Travis is different, having missed all of 2018 dealing with a neurological disease. He’s made a fantastic return from what could have been a career-ending situation, but all observers agree that Frederick hasn’t gotten back to his All-Pro form yet.

Cowboys QB Dak Prescott: ‘What pisses you off is they think they are better than you’ – Clarence Hill, Star-Telegram

Dak Prescott rarely shows emotion, so this is pretty interesting.

The Cowboys are giving the Saints credit for their scheme and discipline in slowing down what had been a high-powered attack. Running back Ezekiel Elliott rushed for just 35 yards on 18 carries and quarterback Dak Prescott was held to 223 yards passing and didn’t throw a touchdown pass for the first time all season.

But the Cowboys believe their own mistakes and miscues, including fumbles by tight end Jason Witten and Elliott in plus territory and a dropped pass on third down by receiver Randall Cobb to kill a potential scoring drive, proved to be the difference in the game, per Prescott.

That has them little more honed in and edgier this week from the top on down.

“It could have been a different game, give them credit,” Prescott said. “Like Coach (Jason) Garrett said, ‘what pisses you off is they think they are better than us’.”

“They think they are,” said Prescott when asked to clarify.

Prescott was not trying to be arrogant or disrespectful to the Saints.

It was insight into the Cowboys mindset coming off the loss to the Saints some on the outside believing that their success was largely based on playing inferior opponents through the first three games and there is now a book on how to defend them that future teams will copy.

“We were moving,” Prescott said. “They are not stopping us like that. We started to hurt ourselves. We had two costly turnovers and on third down, the ball is behind (Cobb) We were moving on that drive. All that happened right there in the plus or as we are going into the plus. I can’t just say they stopped us. They didn’t really, we stopped ourselves and didn’t make the necessary plays. That was three drives that may have turned into points one way or another. We lost by 2. You get a field goal on one of those three, it’s a different game.”

How cobra-like Robert Quinn has inspired Cowboys and will be key against Packers, Aaron Rodgers – Jori Epstein, USA Today

Robert Quinn has been a huge asset for the Cowboys early on, but can he be a true difference-maker against a player like Aaron Rodgers?

Rodgers has won six of nine career games against the Cowboys, throwing 16 touchdowns to two interceptions with an average quarterback rating of 103.6. In 2014 and 2016, it was Rodgers magic that led the Packers to the NFC title game in wins of five and three points respectively. The Cowboys have beat Rodgers just once in their last seven faceoffs: a 30-16 decision at Lambeau Field in October 2016. Then-Cowboys defensive lineman David Irving exploded that game for four tackles, a sack, a pass deflection and three forced fumbles, all in just 19 defensive snaps. It was enough to limit the Pro Bowl quarterback.

The Cowboys must limit him again to win this week.

“I don’t know that anybody has had real success at stopping him throughout his career.”

Still, the Cowboys hope that the offseason addition of Quinn to their defensive line will help reverse their fortune against Rodgers. Two-time Pro Bowl defensive end DeMarcus Lawrence will anchor the left side of Dallas’ line, while defensive tackles Christian Covington and Maliek Collins play interior. But since Dallas acquired Quinn from Miami in March, he has led the team in sacks (3) and quarterback pressures (11, per coaches film)—despite missing two of the season’s four contests.

It might be an under the radar concern for this game, but the height of these Packers receivers makes me a little nervous. Both Marquez Valdes-Scantling and Geronimo Allison are both over 6’3”and will go get the ball. You may remember from the Miami game where these cornerbacks had to deal with DeVante Parker and his length. It would not surprise me one bit to see Aaron Rodgers throw the ball up to these receivers and test whether Chidobe Awuzie, Byron Jones and Anthony Brown are capable of defending Valdes-Scantling and Allison down the field and in the air.

Interestingly enough, and with a sound byte that will circle the globe relentlessly for the next few days, Jones instead looks to Foxborough for a more direct comparison.

That’s the line you’ll probably see parsed from his full quote and plastered across social media graphics this weekend, but Jones stopped abruptly and reframed his words to make sure no one could misconstrue what he’s truly attempting to say — assuming they actually seek out the remainder of the statement.