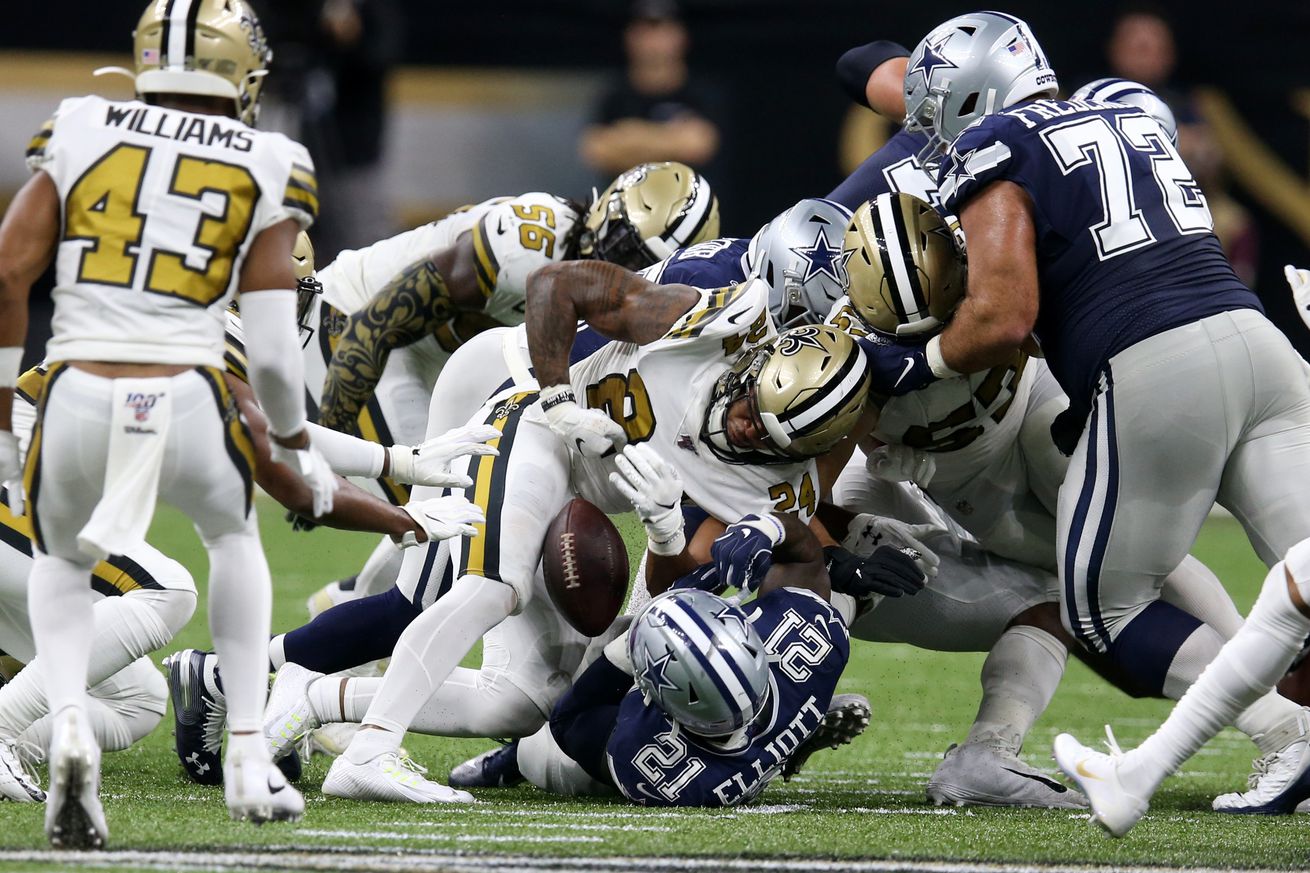 Cowboys offense might wish they changed things up a bit vs. Saints but a chance for big rushing day against Packers lays head.

How Zeke Elliott & The O-Line Plan To Regroup – Rob Phillips, DallasCowboys.com
With the Packers up next, Ezekiel Elliott and the offensive line are regrouping after a tough game up front last Sunday.

Sunday’s opponent, the Green Bay Packers, rank 26th against the run. They gave up 176 rushing yards in a Week 4 loss to the Eagles. But they’ve got a talented front seven that includes outside linebackers Preston Smith and Za’Darius Smith, who have 8.5 combined sacks through four games.

“They’ve got some big, thick, physical guys in the middle,” guard Zack Martin said. “It’s going to take a lot for us to get underneath those guys and get them out of there.”

The Cowboys just couldn’t find any consistent traction up front against the Saints’ defense last Sunday. Center Travis Frederick said the line handled the pre-snap communication fine amid the Superdome noise, but overall execution was lacking.

“There wasn’t very many plays where we were all doing our job at the same time,” Frederick said.

“I do think they did a good job game planning, trying to give themselves the best looks into our looks. …They were running generalized pressures and movements that would have been good against both (run or pass). So we just needed to tighten that up from an offensive line standpoint and make sure we are on top of those movements. And I think we’ve addressed that.”

The offensive line will likely have a slightly different look Sunday against Green Bay. Cameron Fleming has taken the first-team left tackle reps in practice this week for Tyron Smith, who is sidelined by the ankle sprain he suffered on the final drive against the Saints. Right tackle La’el Collins also didn’t practice Wednesday or Thursday, though head coach Jason Garrett said he’s improving – an indication he might be able to get back on the field by the end of the week.

After disappointing loss to Saints, should Cowboys look to Ezekiel Elliott vs. Packers? -Michael Gehlken, Sportsday DFW
Running the football didn’t go well in New Orleans but the Cowboys shouldn’t give up as Packers present interesting matchup for Ezekiel Elliott.

Through four games, the Packers have struggled to stop the run, averaging 5.0 yards allowed per carry. Last week, Philadelphia Eagles running backs Jordan Howard and Miles Sanders combined to total 26 carries for 159 yards and two touchdowns against them.

This is an opportunity for Dallas to rebound.

As a team. As an offense.

”I wasn’t in there (Sunday), but as an offensive lineman part of this O-line, we have a lot of pride,” Su’a-Filo said. “(The Saints) executed well, and we didn’t. It still remains the same. We’ve got to establish the run. I know there were a few plays guys wish they had back. Like I said, we’ve got pride and take it upon ourselves to make it right and fix it.

Ezekiel Elliott looks to put Saints loss behind him & take advantage of opportunity vs. Packers – Todd Archer, ESPN
It was an embarrassing afternoon for the two-time rushing champion, Ezekiel Elliott, who says he’s put Saints in the rear-view mirror and is focused on Packers.

Elliott’s 35 yards were the third fewest he has gained in a game in his career. He followed up his 8-yard outing against the Denver Broncos in 2017 with 80 yards and a touchdown on 22 carries in a win against the Arizona Cardinals. In 2018, the Washington Redskins limited him to 33 yards on 15 carries, which was followed by 61 yards on 17 carries in a loss to the Tennessee Titans.

The Packers are allowing 142.3 yards per game on the ground through four weeks.

Cowboys Identity Still Goes Through Ezekiel Elliott, Just Not as Much as Years Past -Matthew Lenix, Inside The Star
The Cowboys need to find the balance with how to set up their best player for success. It’s still Ezekiel Elliott’s show though it helps to share the spotlight.

Last Sunday in New Orleans, there was no spark from either side of the ball. Elliott scored the games only touchdown but only managed 35 yards on 18 carries. Prescott was 22 of 33 for 223 yards but didn’t produce any touchdowns. These types of games happen in the league from time to time and you simply have to brush it off and regroup.

This Sunday the Green Packers come to do town having defeated the Cowboys three consecutive times in Dallas and having won seven of the previous eight games in this rivalry. The Packers are arguably the leagues worst run defense in the first month of the season. Will Elliott set the tone on the ground? Will Prescott come out guns blazing through the air to set up run? It will be interesting to see what formula works in this game but fortunately for Cowboys, they can control games with Elliott or Prescott these days.

With Zeke Elliott next, Packers have to get run defense on track in a hurry – Rob Demovsky, Green Bay Packers Blog (ESPN)
The past three weeks, Green Bay has given up the most rushing yards in the NFL.

Elliott ranked seventh in the NFL in rushing yards (324) through Sunday, but throw out the opener (he reported just days earlier following his contract holdout), and he’s fifth over the past few weeks with 271 yards and a pair of 100-yard rushing games. But he didn’t get much done in Sunday’s loss to the Saints: 18 carries for 35 yards with the game’s only touchdown.

In three games against the Packers, including playoffs, he eclipsed the 100-yard mark each time. He has 79 carries for 398 yards in those three games combined. That’s an average of 5.04 yards per carry — or exactly what the Packers’ defense has allowed to date in 2019.

Five thoughts on Dallas Cowboys, post NOLA loss: Who’s suiting up for Cowboys OL vs Packers? – Tom Ryle, Blogging The Boys
A quarter of the regular season is in the books, so what next? More importantly, who’s next man up on the Cowboys’ offensive line?

The offensive line is the biggest concern

Not everything is beer and skittles.

Williams moves from LG to RT for La’el Collins (back), who is day-to-day. Martin (back) could be a limited participant today.

Hopefully, La’el Collins will be back before the week is out, so at least four of the five starters will be back in their normal places. But Tyron Smith is not expected to play this Sunday, meaning the team will have to roll with Cameron Fleming at LT. That is not optimal.

But it may force some more creativity in protecting Prescott and opening holes for Ezekiel Elliott. Hopefully, we will also see a much bigger dose of Tony Pollard than the measly two snaps he had on offense in New Orleans. The team went 7-1 down the stretch to make the playoffs last year without Travis Frederick, and some time missed by Smith and Connor Williams as well. It should not be easy, but this team can overcome if they take the right approach and put in the effort on the field. They at least seem to understand the problem.

Of the performance of the offensive line as Ezekiel Elliott averaged 1.9 yards per rush _ second-worst of career _ vs Saints, Travis Frederick said: “There weren’t very many plays when we were all doing our job at the same time.’’

Cowboys musings: Life without Tyron Smith; what Dallas needs to do to beat Green Bay -Newy Scruggs, Sportsday DFW
Newy Scruggs answers a few questions ahead of the big Cowboys-Packers matchup at AT&T Stadium, including what to do with the loss of Tyron Smith for the week?

Q: The Cowboys had all kinds of trouble with the Saints’ front seven and couldn’t get anything going on the ground. With Tyron injured, should fans be worried about the Cowboys OL?

Scruggs: Injuries happen. Dallas has to figure out a way to win. I think they will have to give Cam Fleming help at left tackle. I would not say “worry” is the word to use. I think they just have to adjust the way they go about pass protection.

Q: How does Dallas come back from this loss to the Saints to beat Aaron Rodgers?

Scruggs: The Cowboys can’t beat themselves by turning the football over. The Cowboys need to win the line of scrimmage and get 125 yards out of running back Zeke Elliott.

Writer’s Blocks: Cowboys-Packers is the real rivalry and it continues Sunday afternoon – David Helman, DallasCowboys.com
Cowboys-Packers has been called quite the rivalry but it’s unfortunately not until the other team starts winning a few…AHEM COWBOYS?!

6. This feels like it could be a really great rivalry. We’re talking about two of the most iconic franchises in the NFL, who share a lot of history together and feature a lot of star players. Between the Ice Bowl, “Dez Caught It” and that 2016 playoff heartbreaker, there’s a lot of reasons for Cowboys fans to hate Green Bay.

Here’s the thing, though: it’s not a real rivalry until the other side starts winning. That regular season win in 2016 is the Cowboys’ last win against the Packers in the last decade. Green Bay is 7-3 in the last 10 meetings, and they’re 9-3 if you stretch the series back over the last 20 years.

To be clear, this isn’t a make-or-break game. The beauty of starting 3-0 is that the Cowboys have bought themselves some breathing room. It’s a heck of a chance to make a statement coming off an ugly loss, though. And it would go a long way toward injecting some life into a “rivalry” that’s been pretty one-sided in recent memory.

And now to DeMarcus Lawrence. We already knew he was dealing with a dinged-up shoulder and a sore knee. But now Cowboys coach Jason Garrett reveals that Tank’s “biggest thing is a heel bruise. He’s getting treatment for that.’

Yeah, chasing around Aaron Rodgers might be The Story on Sunday. Therefore Tank Lawrence’s health is The Story today.

At the NFL season’s quarter mark, what’s for real? What might be meaningless for Dallas Cowboys by December? – Jon Machota, The Athletic
Is Cowboys defense just not designed to get takeaways? Will Dallas find more ways to utilize rookie RB Tony Pollard?

What seems to be for real? Although the Cowboys got their first interception of the season Sunday night, they appear to be a good bet to again be one of the NFL’s worst teams at picking off passes. Dallas had only nine interceptions last year, 10 in 2017, nine in 2016 and eight in 2015. The Cowboys play a defensive style on the back end where they try to keep everything in front of them, reducing the chances of allowing a big play. The trade-off for that is very few game-changing turnovers forced on the back end. Byron Jones has become one of the NFL’s top cornerbacks, earning his first Pro Bowl invite last year. He has played in 22 games since the start of last season, including playoffs, and he has not intercepted a pass.

What might prove meaningless by December? Through four games, rookie running back Tony Pollard has been targeted four times in the passing game. He has caught all four for 28 yards. I think his opportunities in that area will increase as the season progresses and defensive coordinators start taking away some of the things that are working best for first-year offensive coordinator Kellen Moore. Pollard was a big-time pass-catcher at Memphis, often lining up at wide receiver. He caught 104 passes for 1,292 yards and nine touchdowns over the last three years in college. But so far with the Cowboys, Pollard has mostly been used as a between-the-tackles runner, backing up Ezekiel Elliott. The rookie has 30 carries for 149 yards and a touchdown.

We’re two days away from kickoff. Here are our final thoughts on who wins this Sunday.