The Cowboys could be without Tyron Smith for a little while. The left tackle suffered a high-ankle sprain, according to owner Jerry Jones, and those sprains often rule players out for multiple games. 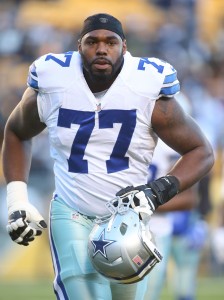 Smith, pictured here with biceps that would make the Incredible Hulk turn even greener with envy, made five straight Pro Bowls from 2014 through 2018 and was named as a first- or second-team All-Pro in four of those campaigns.

Unfortunately, injuries have been a roadblock in recent years. In 2017, he finished the year on IR due to a mix of knee, back, groin, and hip injuries. Last year, he was once again limited to just 13 regular season games.

Though not as celebrated as stars Dak Prescott, Ezekiel Elliott, or Amari Cooper, the Cowboys’ stellar offensive line is at the heart of the unit’s success. Smith has been a major part of that, without him, they won’t be quite as strong. The Cowboys can insert Cameron Fleming into their starting front five, but another O-Line pickup might make sense.