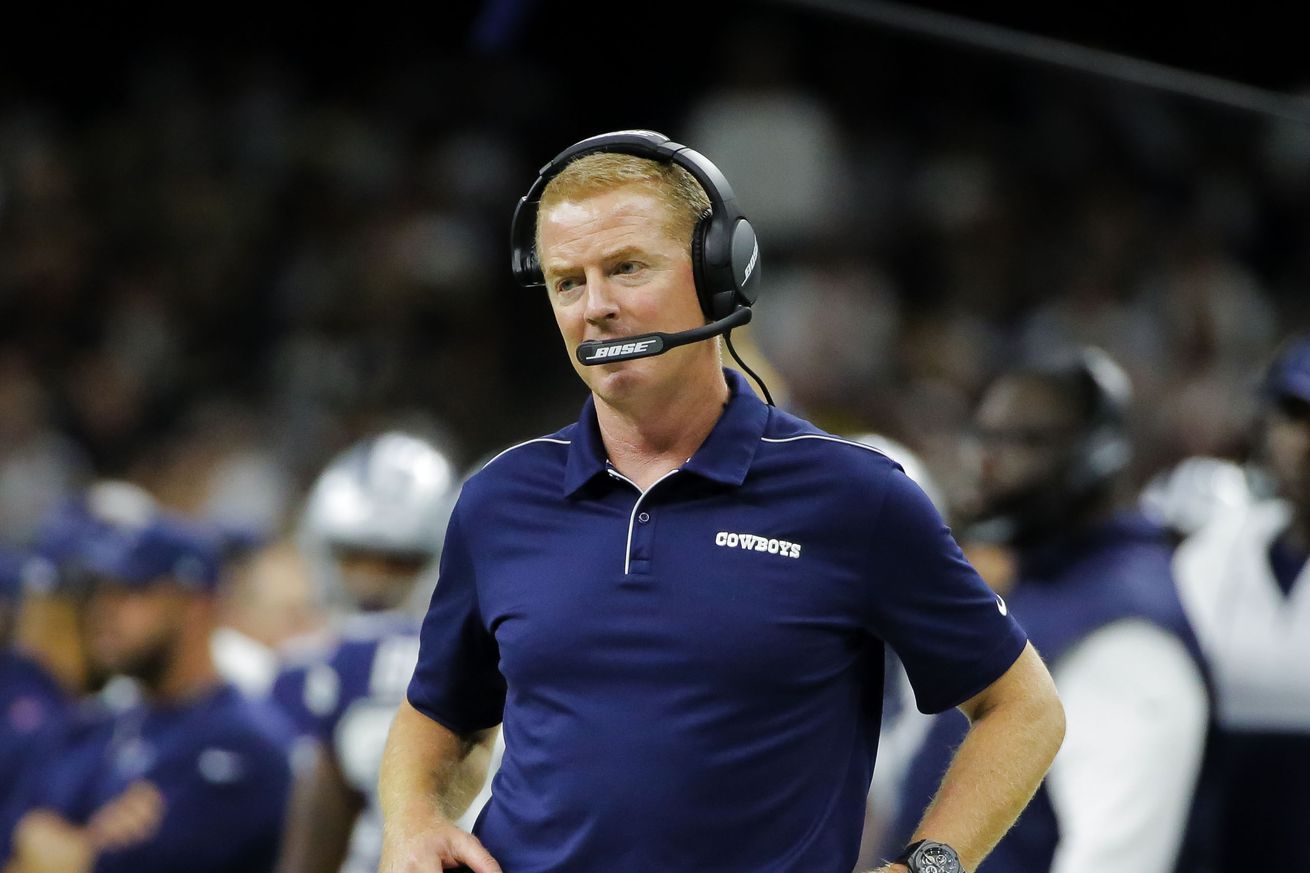 He needs to fix this. | Derick E. Hingle-USA TODAY Sports

The Cowboys were a mess against the Saints.

Well, this rather sucks.

The first three weeks of this little review of some game numbers has had a noticeable air of gloating and satisfaction. Given the way the Dallas Cowboys won those games, hopefully you will forgive that. Things are radically different following the 12-10 loss to the New Orleans Saints, however. It’s not just the numbers being bad, either. There are some things that make you really scratch your head as well.

They are not going to get any better if we delay, so it’s time to dive in.

There were multiple things that went wrong for the Cowboys in this game, and they are interrelated. Most don’t stand alone the way so many people treat them.

But this is the exception. Dallas lost the turnover battle 3-1. You do that, you almost always lose in the NFL. Even if you take away the last play of the game, when Dak Prescott heaved a Hail Mary pass into quadruple coverage, that still is s 2-1 deficit for the Cowboys.

Those two fumbles really stunned the Dallas offense. It had been struggling a bit in the first quarter, but halfway through the second and trailing 6-3, Prescott got something going – for a moment. He hit Jason Witten on third and four, past the sticks, and Witten turned upfield for 16 yards – until A.J. Klein closed from behind and punched the ball loose. Had he not, Witten was going to give Dallas a first down around midfield. The odds are good that Dallas would have at least gotten a field goal out of the drive, and at worst, if they had to punt they should have had the Saints fairly deep in their own end of the field. It didn’t just kill the drive, it seemed to kill the spirit of the offense.

Then, after the defense (which played well in many ways) got a stop and the ball was punted back without New Orleans getting any points off the turnover, the Cowboys had another chance to get something going. After getting the ball on their own 22, they had ground it out to their own 43. Facing a fourth and one after the two minute warning, they gave the ball to Elliott, who struggled but made the first down – and lost the ball just before his elbow hit (at least that is what the replay official determined). This time, the Saints would get down to the 2-yard line before having to settle for a field goal. But in a two point game, that was a crucial three.

As mentioned, there are still a lot of issues to discuss. But nothing was more damaging to the Cowboys than those consecutive drives ended by fumbles.

You can get this from the numbers, but this chart from the NFL’s Next Gen Stats tells the story so much better.

I’ll wait a minute for those who need to hurry out to throw up.

That is absolutely horrible. Only one run that (barely) gained over five yards. All but three are up the middle. And it ties to the next thing.

The ghost of Linehan past

Fellow BTB writer Connor Livesay saved me a lot of work. (It’s not stealing if you give proper attribution, right?)

Careful study of this, and comparison to the first three games, can only lead to one logical conclusion: Kellen Moore is in extreme peril of some sort and called the game in near-perfect Scott Linehan fashion to let us know he needs help.

In an interview on 105.3 The Fan, head coach Jason Garrett disavowed any knowledge of this, disagreeing with the idea that the Cowboys were running it more on first and second downs. This simple listing of the first down plays mean that he either is just lying and evading in his typical “don’t give up anything important” manner, he had not really looked at the game or the stats yet, or he is delusional. I have to hope it is the first, because the second still indicates a disturbing level of ignoring the obvious from just being there during the game, and the third was just a lame joke.

You throw it twice, picking up a first down and then having a “success” on the next – then you hand it off to start seven consecutive sets of downs, with only one meeting the traditional criteria of success, 40% or more of the yards needed for the next first down. A failure to execute well played a part, but even with that, why go back to that dry well over and over?

There has been a suggestion that Prescott was changing the call at the line a lot, and it certainly seemed like the Saints found a way to disguise things very well. Whatever happened, Moore and company need to get this sorted out.

This is a term that relates to field position. While stats make the yards gained from scrimmage simple to see, where drives start is an important factor that you have to dig a bit for, hence the “hidden” term. To illustrate, if a punt goes to the 15, it forces the other team to go 85 yards for a touchdown. If it is short and only gets to the 30, or is returned to that yardline, the offense starts things with 15 yards they don’t have to gain.

The Saints won this particular battle. Significantly. The NFL tracks starting field position as yards from your own end zone line, and in this game, New Orleans came in at 300 exactly, while the Cowboys were at 208. That difference, nearly equal to a full football field, made an impact, since the odds of scoring on a drive are inversely proportional to how far you have to travel. In a two point loss, that is one of several factors that, in and of itself, might have made the difference.

Here’s another. The Saints totally dominated TOP, 36:04 to 23:56. That kept the ball away from the Cowboys, and in the fourth quarter, time pressure seemed to be affecting the play of the offense. This was particularly damaging in the third quarter, which Dak Prescott still owns after again completing all his passes as well as leading the team to their only touchdown against the Saints in the third stanza. But that drive, totaling 5:44 on the clock, was the only time the Cowboys would see the ball before the fourth rolled around. And Bob Sturm notes this in his Monday morning piece at The Athletic:

Defensively, on the surface, the Cowboys did quite a bit. But as the night went along, they could not get the ball back. Instead, 17 of the last 22 minutes were chewed up by the Saints moving the chains and bleeding down the clock. Alvin Kamara and Michael Thomas certainly did not kill them with career days, but they did just enough to help the New Orleans defense look fresh and rested when it mattered most. The Cowboys scored their lone touchdown on an Elliott run with 7:47 left in the third quarter. After that, Dallas moved the chains just three times with the game on the line. Two of those three came on 3rd-and-12, followed by 3rd-and-20 conversions in the game’s final, desperate minute.

That is as neat an encapsulation of what both the offense and defense did wrong in this area as you are likely to find. When Dallas had the ball, and really needed to move it, they simply didn’t outside of the two scoring drives. The Saints, on the other hand, were able to extend their drives and bleed off clock, even when the Cowboys were desperately trying to stop them and take the ball back. It has been pointed out that New Orleans was only 6 of 14 on third down. That was still better than Dallas’ own 4 of 11, but more importantly, the Saints had several times when Alvin Kamara or Michael Thomas moved the sticks on first or second down.

TOP is sometimes an overvalued stat, but in this case, it is another real indication of what went wrong for the Cowboys. In a game where they needed just one more score, the inability to control the clock cost them dearly.

We needed to see more of a couple of players

Blake Jarwin caught all three of the passes thrown at him, including the longest play of the game for 35 yards right down the seam to set up the lone touchdown. He was also had the second highest total yards receiving. Tony Pollard made his lone contribution when he drew pass interference, one call that was fairly clear on replay.

The problem: Jarwin only saw 17 offensive snaps, as the Cowboys mostly ran 11 personnel with Jason Witten out there. And Pollard was on the field for the grand total of two offensive plays.

This was another way that the game Moore called was highly disappointing. All that creativity and innovation just didn’t make the trip down to the Big Easy.

All around Cowboys Nation, there are people taking cover from the pieces of the sky raining down around them. Or so they seem to think.

The NFL season is not a sprint, or even a mile. It is a marathon, and we are just a quarter of the way through. The Cowboys at 3-1 still lead the NFC East, are tied with five other NFC teams, including the next opponent, the Green Bay Packers, and trail only the San Francisco 49ers by a half game, since the Niners had a bye and are the only undefeated NFC squad left. They can do a lot to right things by winning against the Pack in what has to be a much friendlier environment at AT&T, then get what should be a very winnable game against the currently winless New York Jets, who are also coming off a bye but could well still be without their starting quarterback, Sam Darnold, who is still trying to recover from mononucleosis. They have a large issue in the injury to Tyron Smith, and Green Bay has been riding its defense, but Aaron Rodgers does not look like the nemesis of old so far.

This is still a team in the thick of things. And after the Jets, they get the beloved, cute and cuddly Philadelphia Eagles at home before Dallas has its bye. If they win that, they will be firmly in the driver’s seat in the division.

There are still a lot of things to correct. Now we see how well they can do that. The next three games will tell us a lot about whether this team is a contender or a pretender. This loss is not conclusive evidence in and of itself.