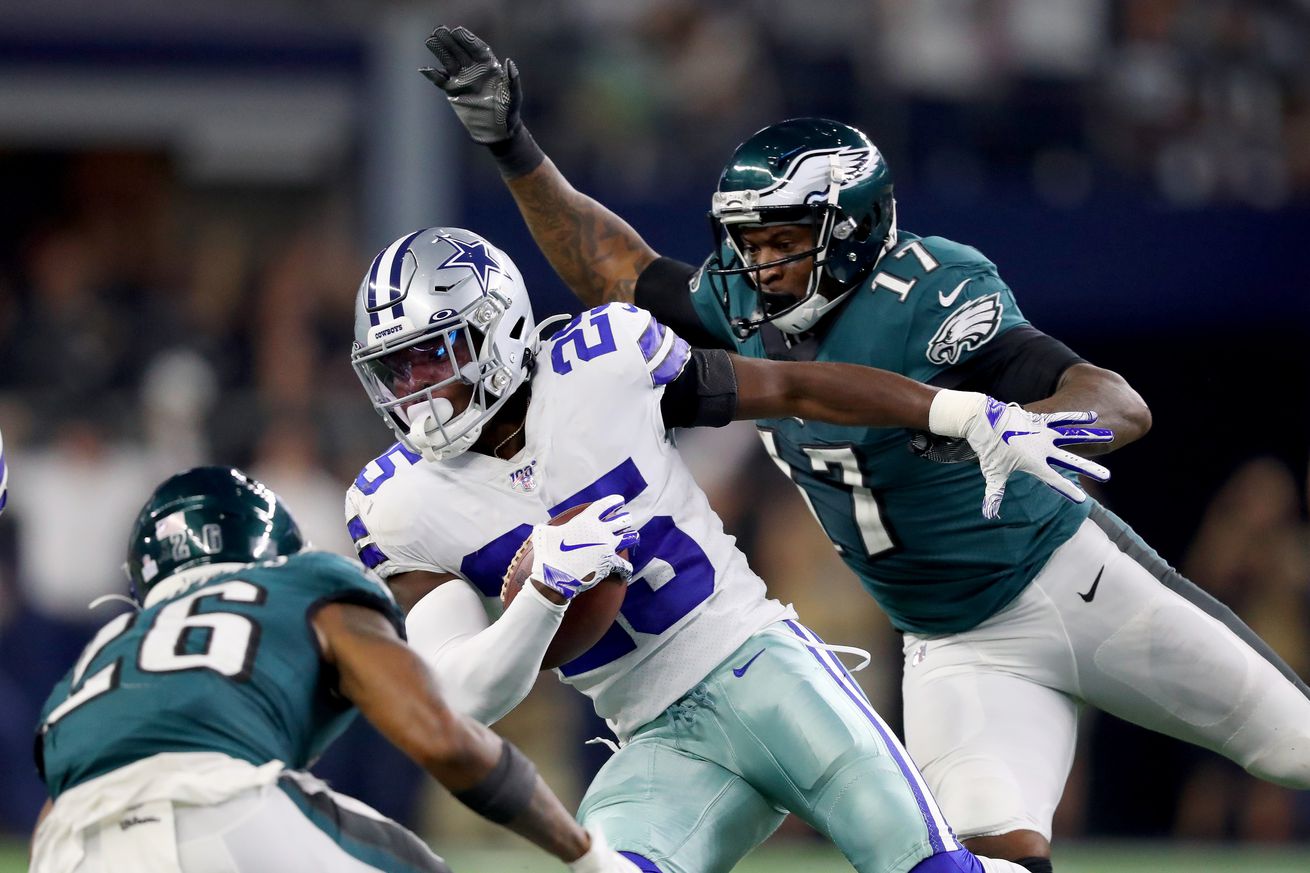 These are so much more fun when the numbers are so positive for Dallas.

Be happy. The Dallas Cowboys stopped the skid the season had entered and got some real traction with their 37-10 trouncing of the Philadelphia Eagles. As you might expect from the score, the numbers this week are almost all good. Let’s begin.

We have bemoaned the sudden uptick in early down running plays, but those objections disappear when the ground game is as effective as it was against Philly. Led by Ezekiel Elliott, who had 111 yards and a touchdown, the Cowboys amassed 189 yards running to go with 239 through the air.

Running the ball was especially effective in the red zone, where three of the four touchdowns came via rushing, with only one score through the air. (Side note: That touchdown toss Dak Prescott made to Blake Jarwin may be the most open I have ever seen a receiver in the end zone. Due to some real confusion by the Eagles defense, he was not only unaccounted for, but all eleven defenders went left while he trotted right, with what must have been 10 yards of separation between him and the nearest green jersey.)

However, let’s caveat all this with the nature of this game. The Cowboys were gifted with two very short fields right out of the gate, got up big early, and had no need to rely on throwing the ball. When you have a big lead, you should run the ball more to eat up clock and control the game. It was great because it worked. It didn’t work because establishing the run or balance is great.

Speaking of those short fields . . .

Maybe I’m burying the lede here, but this is possibly the most significant stat of all. The Cowboys, who came into this game without having once started a drive in the other team’s side of the field, had four in this game. All came as a result of turnovers, where Dallas came out ahead four to one.

That sudden and drastic improvement in an area that has been sorely lacking this season wound up giving the Cowboys an average starting field position of their own 42. That is insanely good.

While the special teams did not do much to help with where the Cowboys started their possessions, as there were only 12 return yards the entire game, they had an outstanding night putting the Eagles deep in their own territory to start their own drives. The Eagles wound up with an average starting position at their own 19-yard line.

We know how important turnovers are, but looking at them from the terms of field position (a pet peeve of mine) shows just how much impact they can have. On the night, that all led to a staggering “hidden yard” advantage of 459 yards to 207. That alone is worth two to three scores.

That’s the good news. The bad news is that turnovers are one of the most random things in the league. Statistically, Prescott continues to be one of the most accurate passers this year, despite what people will tell you from their own “eyeball tests.” But we’ve seen how a bad carom off a receiver’s hands can cause an early swing in the game. The one that Amari Cooper gave up at the start of the Green Bay Packers game affected the Cowboys much as the two quick fumbles in the first quarter helped bury the Eagles.

(Another side note: Once again, there is no transitive property for NFL wins and losses. The Eagles dealt the Packers their only defeat of the season.)

The key thing to take away in all this is that there is a world of difference between having to go 60 yards for a score instead of 75 or 80. If the Cowboys can just maintain at least a small edge in this particular stat, their chances of winning games goes up significantly.

The stars came out in Dallas

This was especially true on offense, where some of that Kellen Moore magic suddenly reasserted itself. The play-calling was creative and often seemed to be very well timed.

Prescott only had 239 yards passing, one touchdown (passing), and had an interception late, but the yards were very efficient. In particular, his throwing helped overcome some penalties that could have killed a couple of drives. And he added 30 yards rushing on five carries (a very nice six yards on average) and a touchdown.

Do not overlook some plays where he obviously made an audible, including the pass to Randall Cobb to set up the Jarwin score. Prescott was confident and precise. When he has both those factors working, he is a stone killer.

Elliott’s 111 yards and TD were mentioned above. He also caught six passes for 36 yards. That indicates he is still primarily a safety valve target, which it would be nice to change. But it is hard to find too much fault when you get 147 yards out of one of your biggest investments.

Speaking of investments, no one is complaining about that first-round pick that was traded for Amari Cooper. He led all receivers with 106 yards on only five catches. That’s a very nice 21.5 yards per, padded of course by the big 44-yard gain. What the numbers don’t show is just how ridiculous he sometimes makes defensive backs look while he accumulates the numbers.

And he’s doing this to DBs… pic.twitter.com/e3e2a2GBor

Jason Witten had a fairly pedestrian game, only catching four passes for 33 yards. What you may forget is that three of those receptions came on the final possession of the first half. Two of them came after the Cowboys were out of time outs. And Witten got the ball out of bounds both times to set Dallas up on the Philadelphia 45, despite the Eagles having to know he was trying to do exactly that. That was important, because . . .

No misses. Nothing was even close to not getting between the uprights. With just four seconds left after a final incompletion that Prescott deliberately made when Witten couldn’t get open to move the ball a little further, Maher kicked a 63-yard field goal to push the lead at the time to 20 points.

Oh, and let’s talk some more about the defense

Four takeaways is absolutely great, and will win a lot of football games, but the defense did a lot more than just that.

They got off the field – a lot. Twice they forced the Eagles into three-and-outs. Plus all four takeaways came on drives where Philadelphia held the ball for three or less plays. That’s pretty danged outstanding.

Philly was also held to 33% on third down conversions.

Three sacks and five QB hits kept the pressure on Carson Wentz, who had a rough night with two of the fumbles lost on him. While the Eagles wound up with 115 yards rushing, they were well under 100 yards before the final Philadelphia possession, when they ran the ball seven times and were really just running clock to get off the field and head home. Take away the 32 garbage time yards gained then, and the Cowboys held them to only 83 yards when they mattered. Of course, being down 14-0 so early forced the Eagles to throw to try and catch up.

Not that they were any more successful with that, getting just 191 air yards and the lone touchdown.

What was most impressive about the defense was that both Leighton Vander Esch and Robert Quinn left with injuries in the first half. The Dallas defense kept things rolling with Joe Thomas and Kerry Hyder filling in.

DeMarcus Lawrence had his best game of the year, getting the sack and forced fumble that led to the second touchdown. And Sean Lee reminded us a bit of his old self, tying with Jaylon Smith for the lead in tackles.

But keep this in mind

The Cowboys have now had four very lopsided wins, to go with three fairly close losses. The problem is that the wins have all come against bad teams. And make no mistake. The Eagles were a very bad team in this game.

That may not mean they are a bad team overall. Good teams certainly have off games, often for no discernible reason. Philadelphia had a reason, as they were missing several key players for this contest. DeSean Jackson, Jason Peters, Tim Jernigan, and Darren Sproles all sat this one out. Contrast that to the Cowboys, who somehow had Cooper, Cobb, Tyron Smith, La’el Collins, and Byron Jones all manage to play despite concerns earlier in the week that all could miss this showdown.

That is huge. Add in that Wentz had one of his bad games, and this was a game that the Cowboys should have won by at least two scores. Of course, NFL games often fail to go to form. Fortunately, this one did.

Still, the list of who was inactive for each team is just as key a stat as any, and the Cowboys did not have much of a challenge in this one. That is not to say the second meeting with Philly will go at all the same.

But there is one last, crucial stat that is extremely important

It’s called Dallas being in control of things. It is far, far better than being in second place. And a much different situation than a year ago, when the Cowboys were 3-4 at this point and chasing these same Eagles.

Now they have the bye to get a bit healthier and then try to get a new winning streak going.