Cowboys defensive end DeMarcus Lawrence had surgery on his broken foot earlier today, according to head coach Mike McCarthy (Twitter link via Todd Archer of ESPN.com). The recovery will rule him out for the next 6-8 weeks, but McCarthy believes Lawrence will be back before the season is through. 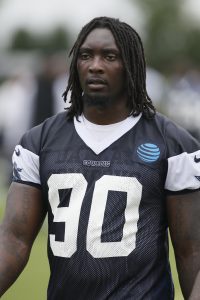 The Cowboys have placed Lawrence on IR. The league’s short-term IR allows players to return after as little as three missed games, though the Cowboys won’t see Lawrence until November, at the earliest.

“Obviously, losing DeMarcus, he’s a prime-time player for us. I thought he had a nice start in Tampa,” McCarthy said. “You hate to see these injuries to any of your guys, but what it does is it gives opportunities to the other players. How we will spread that out will be done through game plan. We’ll work on that today, tomorrow and Saturday. Specifically, we’ll get into that when we play the game.”

In the near term, they’ll have to get by without Lawrence and possibly Randy Gregory after his positive COVID-19 test. Dallas was already in an iffy spot with their D-Line — they were just one of two NFL teams without a sack in Week 1. That leaves them with less appealing options, such as Dorance Armstrong and Tarell Basham, backed by reserve DEs Bradlee Anae and Chauncey Golston.