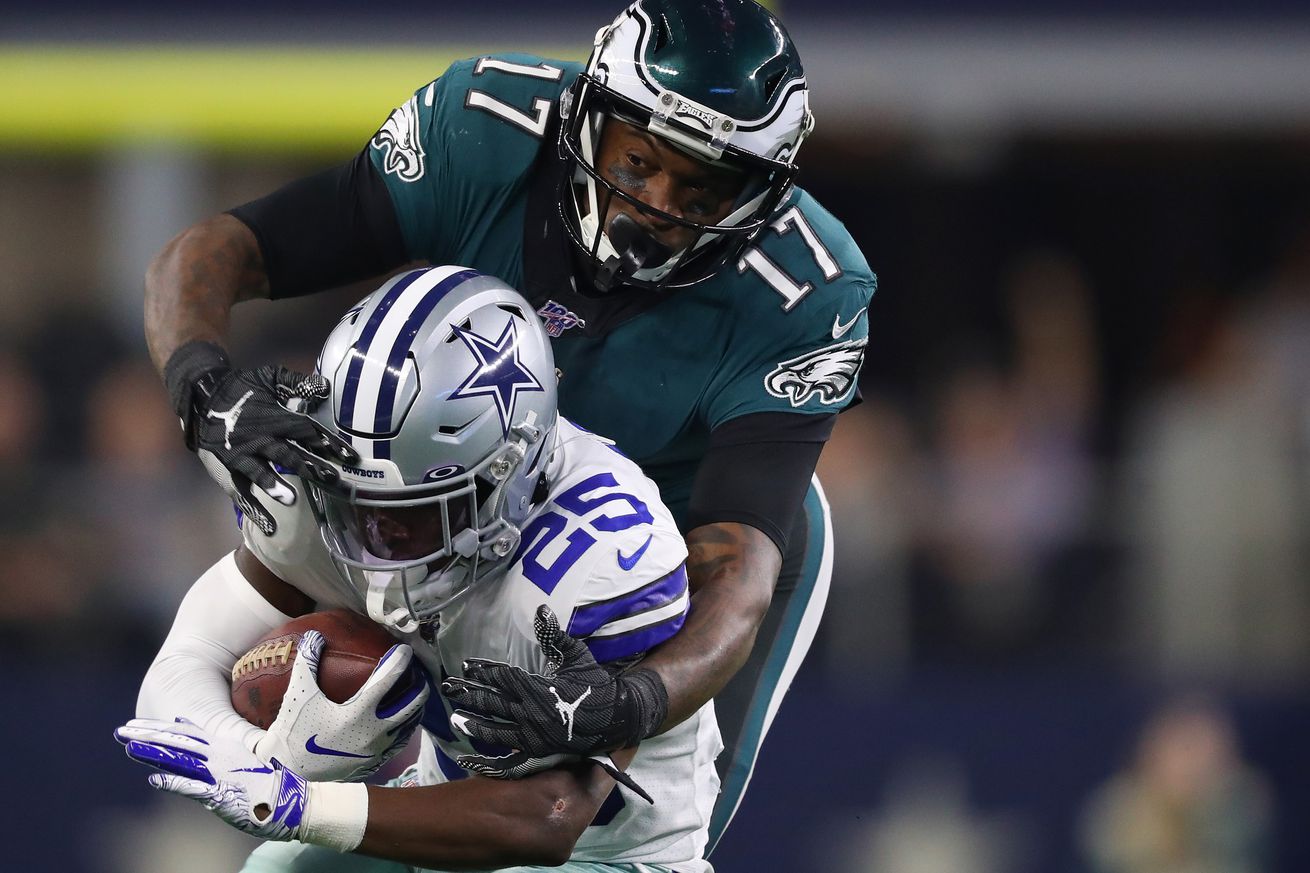 Big plays came early for the Cowboys this time.

The Cowboys got back to business on Sunday night, blowing out the Eagles 37-10 and looking like the team that started off the year 3-0. It was a contest in which the team showed up in all three phases of the game to demolish their bitter rivals. Here are five non-scoring plays that shaped the outcome.

Dallas Goedert fumbles the ball on the opening drive

The Eagles won the coin toss and elected to receive the ball to start the game, hoping to cure their slow starts that have bogged them down this year. Instead, it exacerbated the issues even more.

On the fifth play of the drive, Carson Wentz hit Dallas Goedert down the middle for what would’ve been an eight-yard gain. Instead, Jaylon Smith popped the ball out and Maliek Collins fell on it for the recovery at the Eagles’ own 45-yard line. Dallas went on to score a touchdown a few plays later.

Another fumble, but this time it’s Wentz

After the Cowboys’ touchdown, Philly took the field looking to respond and tie things up. Instead of overcoming their mistake, they compounded it with another turnover courtesy of poor pass protection.

.@TankLawrence gets the strip sack! #DallasCowboys

DeMarcus Lawrence roasted right tackle Lane Johnson to get behind Wentz and strip the ball out of his hands. After rolling several yards, Antwaun Woods fell on the ball for Dallas’ second turnover of the game. This time, the Cowboys offense was set up at Philly’s 14-yard line and two plays later, Ezekiel Elliott had barreled in for the touchdown.

Leading 27-10 heading into the fourth quarter, the Cowboys had the ball and were orchestrating a long, clock-killing drive that had already eaten up five minutes. On the first play of the fourth quarter, Dallas faced a third and six at the Eagles’ 44-yard line.

.@AmariCooper9 is AUTOMATIC on the outside. #DallasCowboys

Dak delivers a perfectly thrown ball down the sideline and Cooper does a tremendous job of getting in position at the last second for the grab. After that, he makes sure to get both feet down in bounds for the exceptional catch, gaining 28 yards in the process and extending a drive that ended up taking seven and a half minutes off the clock.

Xavier Woods gets his first pick of the year

Right after a Cowboys long drive that ended with a field goal from Brett Maher (who was perfect in the game, by the way), the Eagles were down 30-10 and in desperation mode. On the third play of the drive, Wentz tried to hit Alshon Jeffery down the middle but Xavier Woods wasn’t having it.

XAVIER WOODS WITH THE INT!

Another Eagles turnover as the #DallasCowboys are on their way to a victory. pic.twitter.com/lj3Py8ykiE

The X-Man did a tremendous job of stepping in front of Jeffery to make the interception, showcasing the ball-hawk skills that once garnered him 14 picks over three years of college play. The interception served as the final nail in the coffin for the Eagles and cemented the win for Dallas.

Yet another turnover for the Eagles

After an interception on a throw that Prescott himself admitted was him getting greedy, the Eagles were set up at their own 20 with just under 11 minutes left and still down 20 points. A comeback was unlikely, but they still have to try. Somebody didn’t get that memo to Wentz, though, as he botched the snap on the second play of the drive.

The ball hit Wentz right in his hands, but he had trouble bringing it in and the ball bounced towards the line of scrimmage. After a brief scrum, Kerry Hyder managed to bring the ball in for the Cowboys’ fourth takeaway in the game. Three plays later, Dak ran in for a touchdown to make the blowout just a little bit worse for the Eagles.