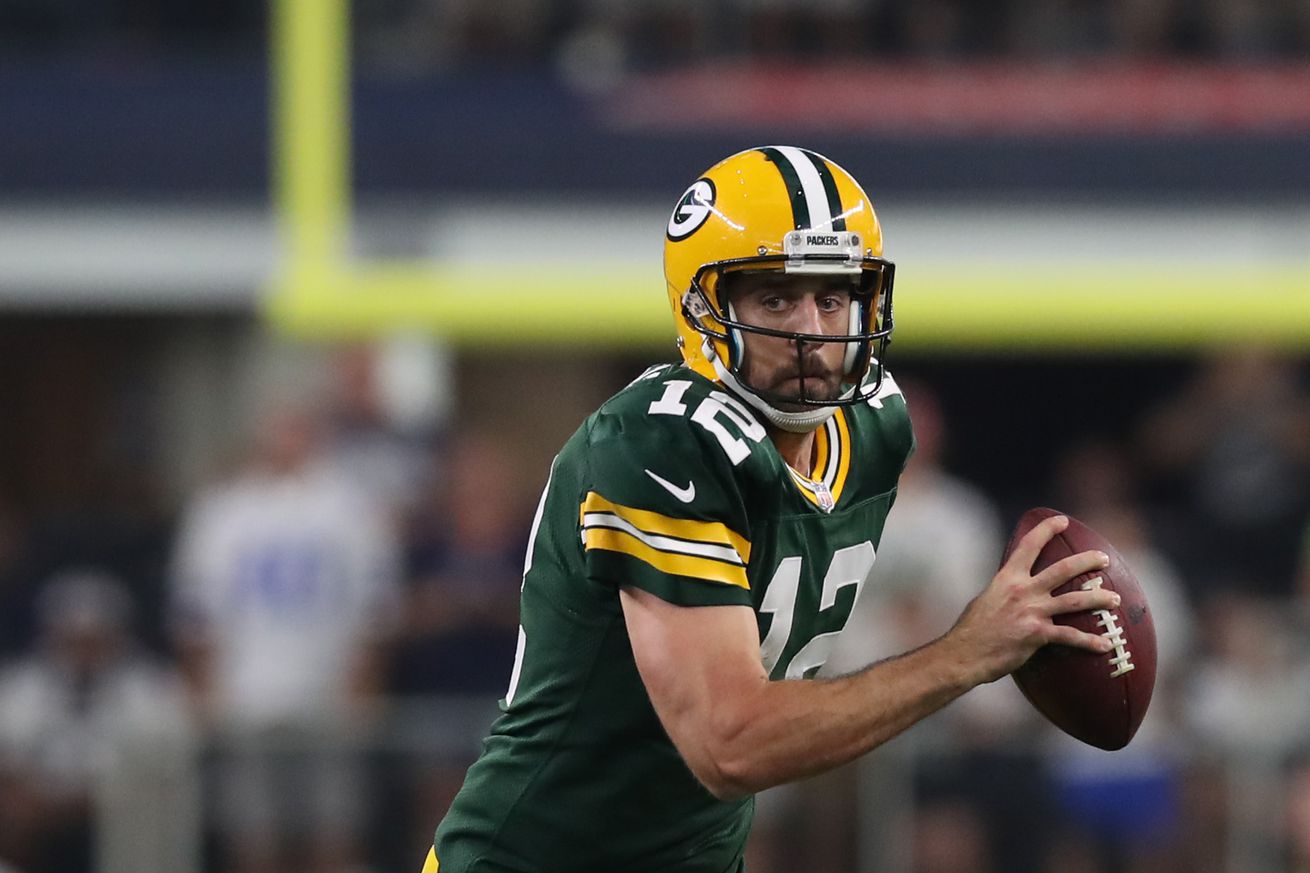 There will be plenty of things to keep an eye out for on Sunday.

Stop me if you heard this one before – Aaron Rodgers leads the Green Bay Packers on a last-minute game-winning drive to beat the Dallas Cowboys. Oh yeah, we’ve heard it. In fact, that’s the exact song that’s been playing the last two times these squads have faced each other at AT&T Stadium. We all remember when Mason Crosby hit that 73-yard field goal (it might’ve not been quite that long) as time expired to beat the Cowboys 34-31 in their 2016 Divisional playoff game. And then who could forget the following season, when Rodgers found Davante Adams in the end zone to go up 35-31 with just 11 seconds left in the game.

For the third straight contest, these two teams will be playing at AT&T Stadium, but the Cowboys are hoping a third time is a charm as they look to break the Green Bay curse. The Cowboys have had all sorts of fits with the Packers over the last decade as they have just one win over the last eight meetings. This is quite the contrast to that ‘90s Cowboys team that just owned the Packers back then.

But this week’s game isn’t just about exorcising the demons from a Packers team that has gotten the better of them lately. This is a big game for other reasons as both teams try to fight for the lead in their division as well as establish themselves as one of the stronger teams in the NFC. A win would be a nice step in the right direction in doing just that. There’s a lot to keep us interested in for this game, and here are five things to pay particular attention to on Sunday.

1. Which Cowboys offense will we see?

Fans will be sitting on the edge of their seat wondering which offense will show up this week. After putting up 30+ points in three straight games, the Cowboys only mustered up 10 last week against the New Orleans Saints. The offense was also coming off of three games were they churned out 494, 474, and 476 yards, only to get 257 yards last week. And when you factor in they only had 45 yards on the ground and three turnovers, well – that’s a surefire recipe for defeat.

Inquiring minds want to know which version of the Cowboys offense will we see on Sunday. How much did the quality of their opponents play into the offense’s effectiveness over the start of the season? Will Kellen Moore and company be able to make adjustments if the Packers borrow a page from the Saints playbook and just use extra defensive backs to jam up space in the secondary? Or will the Cowboys just stubbornly just take the ball ran run with it and hope for the best? How this offense responds not only will be huge in influencing the outcome of the game, but it will also set the barometer for how us fans feel about the season going forward. So, let’s hope the good offense returns.

2. Which Packers defense will we see?

The Cowboys offense wasn’t the only group that seemed to do a 180-turn last week as the Packers defense broke out of their trend of dominance as well. Green Bay had kept their opponents under 17 points in each of the first three games and was starting to look like a real force in the league. Free agent acquisitions like Adrian Amos, Preston Smith, and Za’Darius Smith were all providing immediate dividends as the team showed the ability to win games without living and dying by the arm of Aaron Rodgers. They were carrying the team as they started the season 3-0 despite never eclipsing 335 yards of total offense. That’s a different Packers team than we’re used to seeing.

But then things changed last week when the defense allowed 34 points to the Philadelphia Eagles, including surrendering 176 yards on the ground. Suddenly, the Packers were forced to lean on Rodgers and his 414 yards passing; however, it wasn’t quite enough to beat Philly.

Will the Green Bay defense get back on track, or are they vulnerable to another offense attack, especially one that features a strong running game? It should be interesting because this game could go either way – an defensive battle or a back and forth offensive explosion as it’s really hard to gauge how this one will turn out.

The Cowboys will be without their All-Pro left tackle Tyron Smith as he is dealing with an ankle sprain. And to make matters worse – La’el Collins, who is having his best season as a pro, is dealing with back issues that has limited him in practice this week. This suddenly makes things a little bit of a concern out on the edge for the Cowboys offensive line. We’ve all seen how bad things can get when they can’t protect Prescott, and they’re going to have their hands full with Mr. & Mr. Smith now rushing from the outside.

Will the offensive line be up for the task, or will Prescott be under fire in this game? Green Bay’s defense is the third-ranked pass defense team in the league and are coming off two straight games where they’ve allowed less than 165 passing yards. The Cowboys can circumvent this issue with a stout ground attack, but if they have to rely more on Prescott and the passing game, how well he’s protected could end up being a difference-maker in this one.

4. WR’s with something to prove

This game will mark Randall Cobb’s first ever game against the team that drafted him. After using a lot of their financial resources to boost up their defense, the Packers chose to not re-up Cobb and allowed him to walk in free agency. The Packers’ loss is now the Cowboys’ gain as Cobb has fit in perfectly as the team’s new slot receiver, replacing Cole Beasley. The veteran receiver spoke out about his former team choosing to go a different direction.

“I’m not going to say it did or didn’t, because I’m a person, when things happen in my life, I believe they happen for a reason,” said the faith-driven Cobb. “I feel like I’m here for a reason. I’m in Dallas for a reason.”

And that reason is clear – to help this Cowboys team take the next step.

“It felt like the best situation. I said from the beginning, I’m playing for a championship,” he said. “I want to be a part of something special. Look in this locker room. Look at the names. On paper, we have everything it takes. Now, it comes to being efficient, executing the offense, making plays defensively, and putting ourselves in situations to win games. And doing that consistently throughout the games to put us in a position to be in the playoffs and go on a run.”

While Cobb playing against his former team will be of interest, an even bigger spark should be the return of Michael Gallup. After recovering from knee surgery, Gallup is expected to play on Sunday. The second-year receiver was off to a great start prior to his injury, so it will be wonderful to have him back. Gallup never had over five catches in a game last year, but has eclipsed that in each game he’s played in so far this season, including a 158-yard performance in the opener against the New York Giants. Having the gang back together will definitely put the pieces in place for the offense to have a better chance to get back to their explosive ways.

5. Who will be the Packers surprise hero?

Rodgers can be a dangerous playmaker, but just who will he be throwing to in this one? They will be without their top receiver as Davante Adams is dealing with a toe injury. Behind Adams, the Packers have Marquez Valdes-Scantling and Geronimo Allison as their next best wide receiver options.

Don’t be surprised if Rodgers uses his tight end to help out in the receiving game. In their last two meetings players like Martellus Bennett and Jared Cook have been nice assets for him. And last week against the Philadelphia Eagles, Jimmy Graham had six catches for 61 yards, including his second touchdown of the season.

The team also has rookie undrafted free agent Darrius Shepherd who could be a sneaky target to make some big plays. As Adams is a no-go, the Cowboys defense won’t have to deal with any proven game-changing receiving threat, but as Rodgers has shown plenty times before – he seems to always find someone to come down with big catches against Dallas.