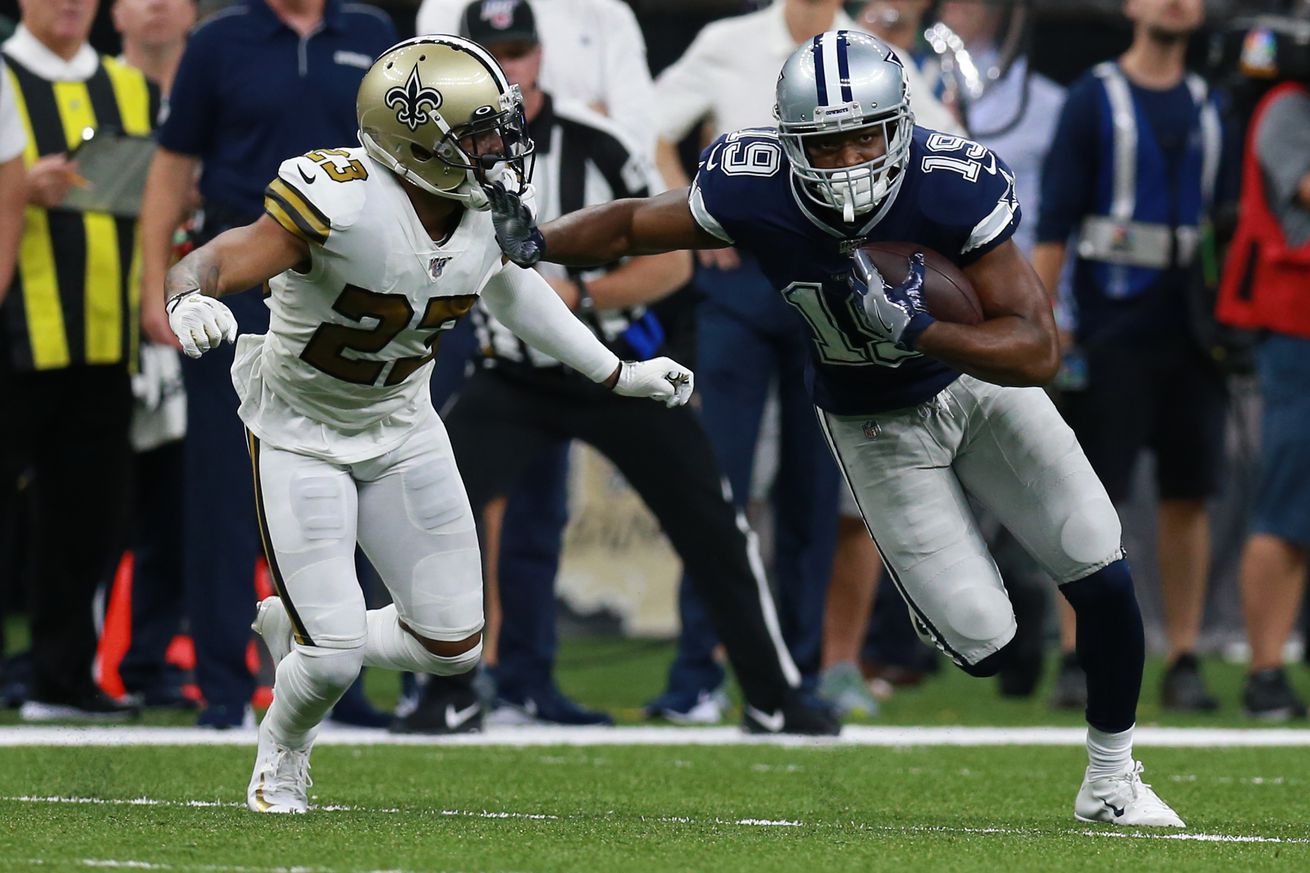 It was a rough night for the team from Dallas.

The Dallas Cowboys defense stepped up and had their best game of the season but it wasn’t enough as the offense crumbled and Dallas fell 12-10 to New Orleans. It was a shocking outcome, simply because all the things that had worked previously proved ineffective even while the questionable parts of the team stepped up. Let’s go to the grades.

It’s really hard to understand what happened Sunday night. At no point did the Cowboys offense seem to have any idea how to attack the Saints defense. This despite the fact the Saints defense simply isn’t very good (evidenced by their 30th ranking in yards per play allowed). The Cowboys, by my measurements, never once attempted a pass beyond 10 yards until the desperate last possession.

The vaunted running game and highly-compensated offensive line generated absolutely nothing. Dallas ended up with only 45 yards rushing on 20 attempts, leaving Prescott and the passing game to make up for the deficiency.

But if you can’t run and don’t throw downfield, it’s hard to actually score points and that’s exactly what we saw Sunday night.

Be clear, this was an offensive failure. The defense had, unarguably, their best game of the season. This is clear by the fact the Saints never once scored a touchdown. Simply, when you don’t allow a single touchdown by the opposition you should win.

I’m hoping we can officially retire the “Kellen Moore should be the head coach even if Jason Garrett wins a Super Bowl” discussion. Confronted with the first truly difficult offensive situation of his career Moore proved wanting. The Saints, on paper, represented easy pickings. And yet the Cowboys offense looked a lot like the inept Scott Linehan-led group that couldn’t adapt or overcome difficult situations.

It’s inexplicable that Dak never once attempted a pass beyond ten yards until less than two minutes remained. It’s also inexplicable why an offensive line with four players playing at a Pro Bowl level in front of an All Pro running back couldn’t generate more than 45 yards of rushing offense.

If a defense sells out to stop that kind of activity there should be opportunities in the passing game. I didn’t see that, only receivers who were always covered and Dak forever looking for something…anything.

It’s hard to judge Dak on this game. The running game was completely absent. Twice, promising drives ended because a future HOFer fumbled (Witten) and then the team’s best offensive player (Elliott) fumbled. Neither of those failures have anything to do with Dak Prescott.

In addition, the OL seemed overwhelmed by the Saints’ front seven, putting Prescott under duress throughout. Still, it’s hard to believe there weren’t some opportunities for plays down the field. Despite these challenges, Dak needed to be better. He was either late or behind on a few throws and in a game like this those differences can mean a win or a loss.

Amari Cooper against either Marshawn Lattimore or Eli Apple should be a mismatch. It wasn’t. Now, Cooper did win his fair share of plays. But none of them were downfield; he was largely reduced to a 5-7 yard player. Meanwhile, none of the other wide-outs did anything.

Devin Smith was held without a single catch. Randall Cobb had three catches for 41 yards but dropped a third-down conversion late in the game that could have really changed the outcome.

Let’s face it, this group isn’t going to make a lot of plays. Jason Witten isn’t the same 100-catch threat he was ten years ago. Blake Jarwin is a wild card. So while Jarwin contributed with the team’s single biggest play of the night…it was more than offset with Jason Witten’s fumble. Yeah, it’s only his ninth fumble of his entire career, but on this night it ended a Cowboys’ possession and put the Saints into possession for one of their four field goals.

The Cowboys can’t expect to get big production out of their tight ends; they absolutely cannot afford to have those players giving the ball away.

If there was a single running lane for Ezekiel Elliott or any other Cowboys runner on any of the team’s 20 running plays, it must have been invisible. In short, the Saints’ high-caliber defensive front overwhelmed and largely dominated the Cowboys’ offensive line.

Now, there weren’t any sacks until the late one but don’t let that fool you. The Cowboys’ highly-vaunted running game was completely shut down and had zero effect on the game. The supposedly first rate offensive line combined with a generational running back combined for 45 yards on 20 carries. Simply put, this team won’t ever win with those numbers.

In addition, throughout the first half Dak Prescott had no time to throw the ball, He was constantly under pressure. In the second half his protection was mildly better.

This was the defensive line we were expecting to see. Robert Quinn was an absolute terror from his right end position. Throughout the night Teddy Bridgewater was forced to abandon his position to avoid pressure from Quinn and Dorance Armstrong and Demarcus Lawrence and Maliek Collins.

Unfortunately, this group still couldn’t finish plays as much as possible. Now, to be fair, holding the opponent without a touchdown should be enough to win, but Bridgewater is a mobile guy and he made just enough plays. Still, this was the best performance by this unit and gives us hope for the future.

This was, by far, the best game Jaylon Smith, Leighton Vander Esch and Sean Lee have had this year. They were all over the place. LVE made multiple plays behind the line of scrimmage, including this play:

LVE makes his own luck pic.twitter.com/6f9nAB4U4b

Honestly, this was the first time we’ve seen LVE make such plays this season and it’s a welcome appearance. Jaylon Smith also looked good, which is a nice rebound from his suspect performance last week.

This was another ho-hum night for the secondary. The Saints’ scheme never truly threatened them deep but they were challenged in the intermediate routes and proved up to the task.

Awuzie got beat a couple times on his patented situation where he has tight coverage but can’t get his head around to track the ball. But really, there weren’t many opportunities for the Saints downfield. It’s hard to fault the secondary for anything that happened Sunday night.

Yet another nondescript night for this group as returns have basically been legislated out of the game. The Saints did use a solid punt return before the half to help their bid for a field goal. Beyond that, however, nothing noteworthy on special teams.

Everything people have been saying about the Cowboys’ offense not facing quality defenses stands simply because the high-flying offense wilted against better competition.

Ten points won’t win you many NFL games. Neither will 257 total yards. Add two turnovers and you have almost no chance of winning.

Kellen Moore and the entire offense now have an opportunity to go back to the drawing board to figure out what went wrong and what needs to change. Because whatever was on display Sunday night against the New Orleans Saints simply wasn’t good enough.