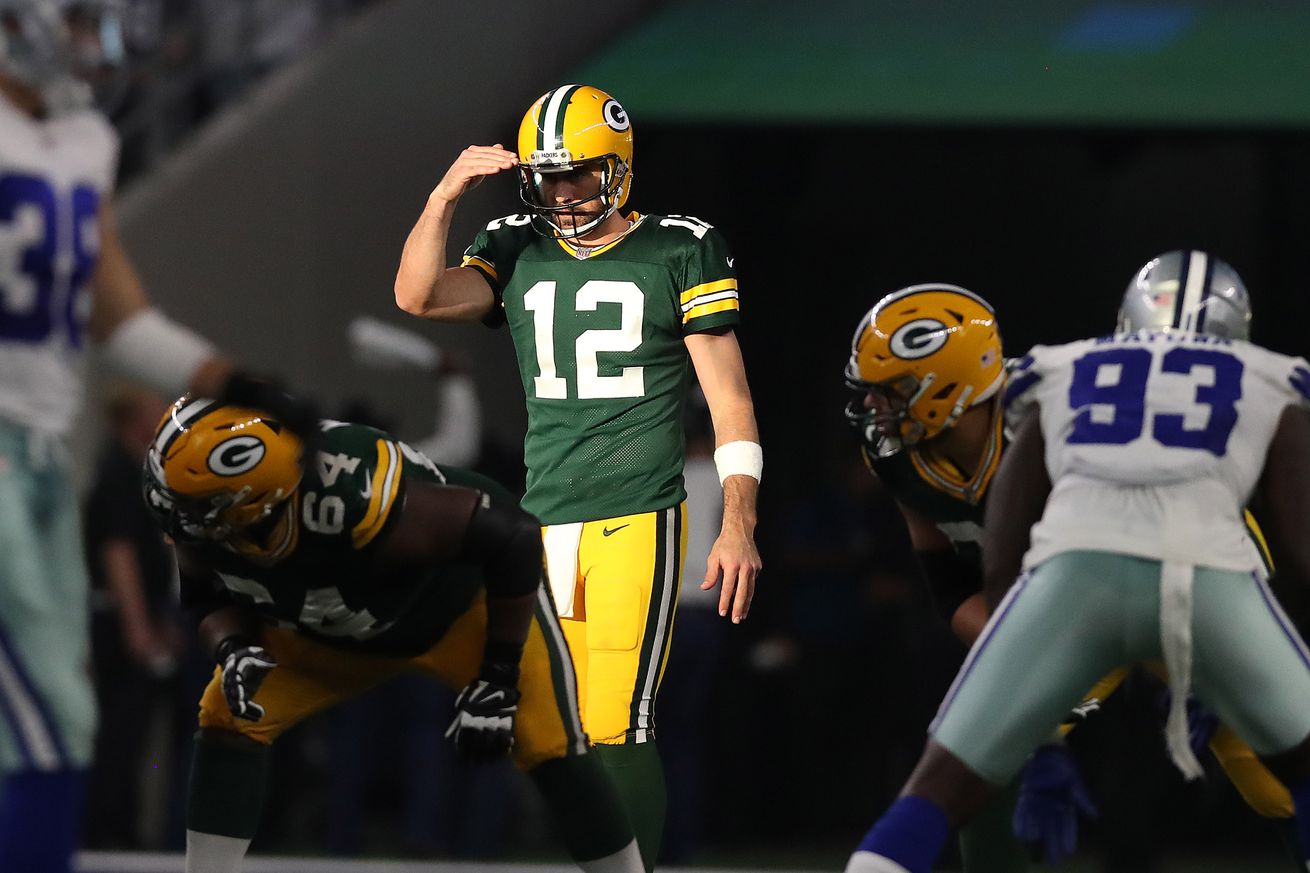 The story is always the same, the Cowboys need to figure out how to stop Aaron Rodgers.

There is not a single opponent that has broken more Cowboys fan’s hearts over the past decade or so than Packers’ quarterback Aaron Rodgers. Whether in the comfortable confines of Lambeau Field or at AT&T Stadium in Dallas, Rodgers has the Cowboys number with a record of 6-2 in the regular season as a starter. He also has a 2-0 postseason advantage over the Cowboys as well.

Those two losses that the Cowboys managed to serve Aaron “Freaking” Rodgers are eight years apart. Tony Romo and crew handled the Packers 27-16 in Rodgers’ first full-time year as the starter. Almost a decade later, rookie Dak Prescott marched up to Wisconsin and upset Rodgers’ Packers 30-16. Aaron Rodgers did get the last laugh at Jerry World in the divisional round of the 2016 playoffs though, 34-31.

Just to further illustrate the heartbreak suffered at the hands of one Aaron Rodgers, here is a look at his stat sheet over the years vs. the Cowboys:

As the 3-1 Cowboys gear up to play host to the 3-1 Packers in Dallas this Sunday, let’s take a look at the statistical analysis of these two teams.

It would certainly seem like the Cowboys have a statistical advantage on Sunday but don’t believe anything you see in regards to numbers.

For one, both teams will be entering Sunday’s game missing key starters. The vaunted Cowboys offensive line will be missing stalwart Tyron Smith while others like La’el Collins and Zack Martin have been playing through pains of their own. The Packers passing offense will be without their number one receiver, Davante Adams. Green Bay will likely be without cornerback Kevin King just in time for Michael Gallup’s return to the Cowboys’ offense. It’s pretty even in terms of who’s in and who’s out, who’s hurt and who’s healthy.

That’s why it all comes back to Aaron Rodgers, the ultimate Cowboys’ nemesis. Statistically speaking, Dak Prescott is having the better year so far as Rodgers is finding his groove with a new coach and offense. It does not matter if his critics suggest “Rodgers has lost a step” or he’s not the same MVP dude he was a few years back, he is Aaron Charles Rodgers. Very few quarterbacks can elevate the players around them to play much better than their pedigrees would have you believe; Rodgers is certainly one of those quarterbacks.

No Davante, no problem, look out for Marquez Valdes-Scantling making some insane catch with Chidobe Awuzie in perfect coverage. These are the things magic men can do and the key for the Cowboys’ defense is to limit Rodgers-magic as best they can. It’s been easier said than done as the Cowboys are well-aware that Rodgers is a slippery fellow. Just when you think he’s sacked, he steps up and makes a last-ditch effort and is rewarded with an insane touchdown. How many times has Rodgers been running out of the pocket and you think he’s toast? By now, once you see Rodgers flushed out of the pocket, you should know it’s only just begun. Father time is undefeated and Rodgers has taken a beating over the last few years but he’s still very capable of doing “vintage Aaron Rodgers things” at any moment. Like that time in the playoffs where Jeff Heath hit Rodgers like a Mike Tyson knockout punch from his blindside but somehow Aaron doesn’t fumble? Magic, folks, magic.

The Cowboys and Packers are both trying to avenge a loss from week four that could have easily gone the other way. This matchup could be made sexier by pointing out the historically great games of recent memory, but the fact is this has been a one-sided affair in favor of Green Bay. If the Cowboys want to assert themselves back in this fight, they have to get in the win column for once. Will the Cowboys finally do enough defensively to dial back the magic man, Aaron Rodgers? Let’s hope so.