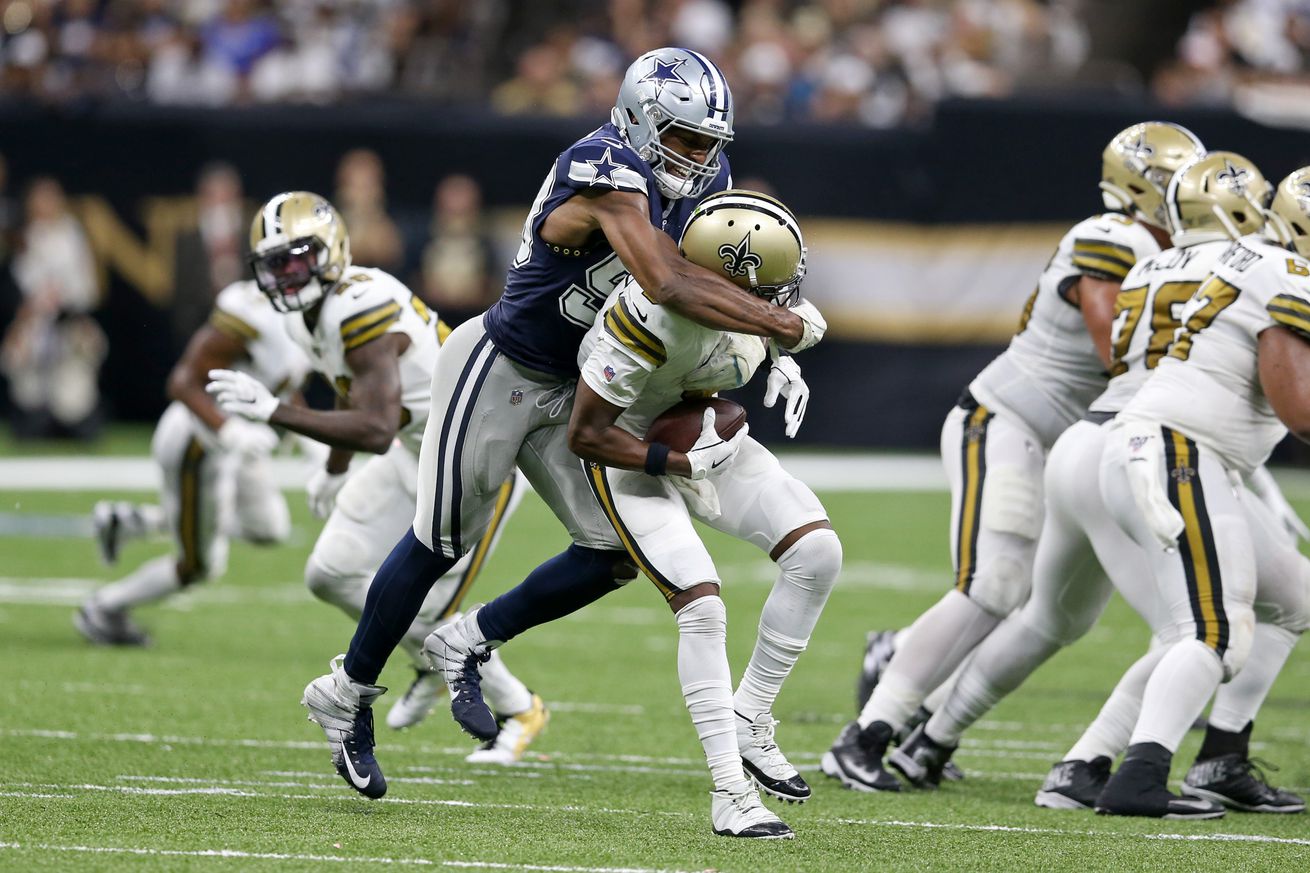 The Cowboys defensive line put in work against their best competition to date.

[Each week we will look back at the game to focus on a single position group and how they performed. Whether it’s high-praise for the Cowboys biggest contributors to another victory formation, or the scapegoats for any potential losses, we’ll spotlight one personnel grouping for review.]

The Dallas Cowboys suffered their first loss to the Saints, on the road, in a 12-10 final score that might as well been payback from Dallas’ 13-10 win last season. Despite the loss, the Cowboys defensive line was extremely active against their best competition. The New Orleans Saints offensive line is one of the better lines the Cowboys will face and the “Hot Boyz” came away with five sacks.

Robert Quinn has only been in the lineup for two weeks and he has three sacks on the season. It reminds you of the David Irving days with far less worries about the character of the player. Quinn has been outstanding and when you pair a perfect speed rusher like him with DeMarcus Lawrence, it makes for a combination capable of wreckage. That’s exactly what Quinn’s speed did, it wrecked the gameplan for the Saints.

Even on a play where Quinn doesn’t sack Teddy Bridgewater, he shows amazing skill and speed in beating two guys.

Quick pressure forces Bridgewater to bail from pocket, but this was a mean euro/leaping cross chop-club from Robert Quinn to beat Armstead after getting chipped. I love how he’s made it a habit to collapse that inside shoulder to reduce his surface area when turning the corner. pic.twitter.com/LdCJAuD3oq

We go to John Owning once again here. Check out Quinn’s never-give-up effort to pursue Teddy Bridgewater and get him on the ground.

Robert Quinn’s pass rush ability has been his biggest asset, but his motor isn’t far behind. Plays with fantastic effort on almost every snap, which you know Marinelli LOVES. pic.twitter.com/QuMAAV7ZMD

Watch Quinn’s speed on display in his second sack, he’s so explosive in his first step, you would think he was offsides but that’s just pure speed you cannot teach:

How you likin’ that Robert Quinn acquisition, Cowboys fans?

Right there, the Cowboys defense gets off the field on a major third-down sack and shame on the Cowboys offense for not driving this down the field and scoring. If the offense helped in the least bit and did what they were capable of, the result would have been much different.

Robert Quinn has been an unbelievable acquisition for Kris Richard and Rod Marinelli. More importantly, he gives DeMarcus Lawrence help, together these two are capable of greatness. Quinn was a monster in New Orleans…

Robert Quinn finished with one of the top defensive performances of the week #NextGenStats fueled by @Gatorade pic.twitter.com/ikMeTFoSZQ

DeMarcus Lawrence has 2.5 sacks on the season and until week three in Miami, Tank was the lone playmaker on the field. Money tends to change expectations as Lawrence was paid $100M+ this offseason but keep in mind that when you see these numbers, there’s more to the narrative:

Granted Robert Quinn is firing off the edge and has more sacks than Lawrence in two games, but Lawrence is performing well and prior to the game against New Orleans, Dave Helman laid down some perspective:

DeMarcus Lawrence is facing double teams a third of the time. He still has 1.5 sacks, a TFL, 2 FF & a FR.

I’m not trying to convince you he’s off to the best start in the league. But the idea that he’s not playing well is silly. https://t.co/GXcPaMJTsy

Lawrence added a sack in this past week’s game, in the fourth quarter, on the very play before Quinn got his second sack of the day on third down. Lawrence is also dealing with recovery from offseason shoulder surgery and a heel bruise. ESPN disagrees with any poor-play narrative from Lawrence. Two Cowboys in the Top-10 for Pass Rush Win Rate:

Now we can all be happy that Tank Lawrence finally has some help on the right side because when one man eats, they all eat.

There is a group of Cowboys fans that have turned on DeMarcus Lawrence and I promise I don’t get it. He has been in on 3 sacks in 4 games coming off shoulder surgery and there may be 99 problems, but Tank aint’ one. https://t.co/6ec3yDaden

The Saints were 0-4 in the red zone and Maliek Collins penetration up the middle was a huge reason why. Here is Collins’ sack which was devastating for this Saints’ red zone opportunity:

Maliek Collins did work as the ‘penetrator’ on stunts in week 4. Said it after week 1, but he looks more explosive this season than I have seen him in his career pic.twitter.com/VVg9UqTIcc

Don’t look now but ESPN was quite proud of the Cowboys defensive tackle as he’s shown up as a big-time winner in pass rush, sixth-best to be exact:

The Honorable Mentions…AKA “The Others”

Covington, as Owning will point out in the next clip, ate up two double teams that allowed the Cowboys linebackers to clean up the play and make the tackle. Here’s the first one and masterfully done by Christian Covington:

Christian Covington eats a double team here and does a good job splitting in time to assist on the tackle. Nice job by Jaylon Smith of attacking the block and filling the holes to stop Kamara. pic.twitter.com/IWz3SKz9UP

Questions about the rookie out of college were about effort but you can see a tremendous amount of effort on this play.

Oh HEY there Trysten Hill! This is what I like to see.

Quick get-off with great pad level, inside hands and arm extension to creat separation necessary to get off the block. He then recognizes Kamara’s cut back and pursues down the LOS despite getting hold (which was called). pic.twitter.com/a5T9G8HLZG

Hill recognizes the explosive Alvin Kamara make a cutback and makes the shoestring tackle to keep the damage at a minimum. On this next clip, Hill manages to do just enough to allow the linebacker, Jaylon Smith in for cleanup duty.

Trysten Hill, who is slanting inside, gets just enough of the center to keep Jaylon Smith clean, which allows him to attack the LOS and make the stop on Kamara. pic.twitter.com/sXSpNjWiME

The Cowboys still have a ton of things to cleanup but they didn’t lose this nail-biter because of their defensive line. The Cowboys pass rush might be finding their way just in time for another huge test vs. the Green Bay Packers.

Cowboys with three of the top pass rushers in the NFL: