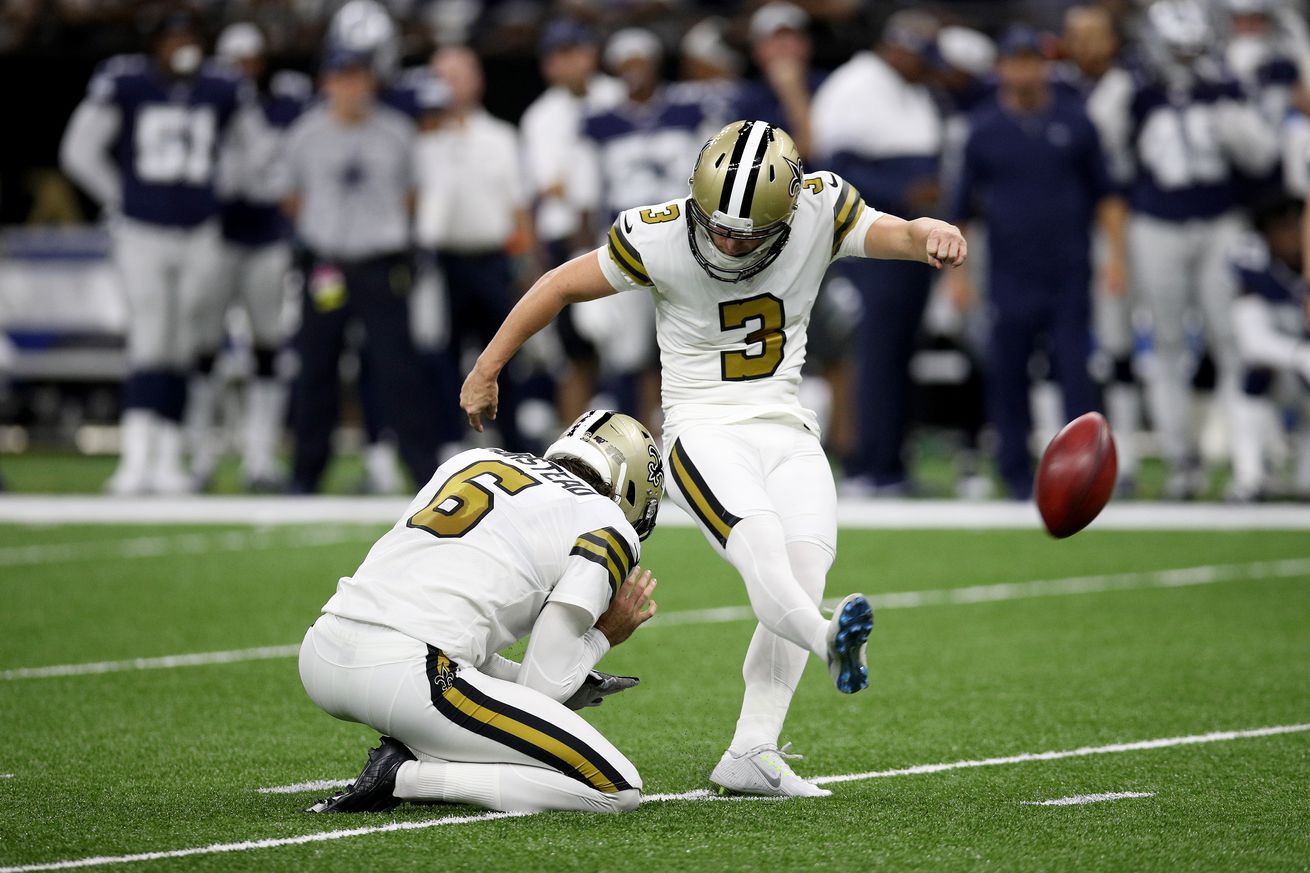 Here are some things that stood out in the Cowboys loss to the Saints.

Well, the Dallas Cowboys are undefeated no more. If you had them going 16-0 this season, then this definitely wasn’t your night. Naturally, none of us thought that was going to happen, but we did think things would go down a little differently that what we were treated to on Sunday night. A Drew Brees-less Saints team was a perfect opportunity to escape New Orleans with a win, but it wasn’t meant to be.

For the second straight year, the Cowboys got locked up in a defensive battle with the Saints, only this time – they came up on the short end. In a game that featured only one touchdown, the Saints were able to snag the win by virtue of four Will Lutz field goals (if you had Lutz on your fantasy team, congrats – I’m happy for you). There were some good things in this game, mostly by the defense. And there were some not-so-good things as well. Here are ten thoughts on Sunday’s action.

Things were going great entering Sunday night as some of the record-leading NFC teams got beat. It started on Thursday night when the Green Bay Packers did the Cowboys no favors by coming up short against their divisional nemesis, the Philadelphia Eagles. While that was not the result we were hoping for, it did give the Packers their first loss of the year.

Speaking of first losses, the Los Angeles Rams were on the short end of a shootout with the Tampa Bay Buccaneers, giving the Rams their first loss as well. But unfortunately, the Cowboys couldn’t escape the weekend without joining them in the loss column. It sounds weird to say this, but the San Francisco 49ers are the only remaining unbeaten NFC team.

After moving the ball at will against their first three opponents, the offense appeared to have met their match as they couldn’t get anything going against the Saints. The offense looked like a flashback of last year’s play calling of Scott Linehan were the team ran, ran, and ran some more. When the team finally did get something going, it would suddenly disappear as they fumbled away those opportunities.

The team came out firing in the second half with a touchdown on their opening possession, but that was all she wrote for the Cowboys offense. After four-straight games with over 400 yards of offense, the Cowboys could only muster 257 yards against the Saints.

3. Great game by the Cowboys D

It’s unfortunate that a defensive performance like this didn’t result in a “W” for the Cowboys, but you have to hand it D for a great showing. They sacked Teddy Bridgewater five times, they held the Saints offense to just 266 yards, and New Orleans never found the end zone. Nine out of then times, you win games like this. Unfortunately, on this day, it wouldn’t be enough.

I don’t know if it was their game plan or not, but the Saints were able to control the clock and make this a game of limited opportunities. New Orleans held the ball for over 60% of the game with several clock-chewing drives. They never resulted in touchdowns, but the 12 points they did score turned out being enough after keeping the Cowboys offense off the field. Dallas only had four possessions in the second half, and that includes their final chance with just 1:39 to go in the game.

Credit the Saints for stretching out their offensive possessions. Their offense actually averaged fewer yards per plays than the Cowboys, but they had just enough advantage in total plays to run the Cowboys out of time.

The Cowboys made the first big play of the game when Chidobe Awuzie came down with an interception after the ball deflected off Tedd Ginn Jr.’s hands. Dallas moved the ball down the field, but the drive eventually stalled, and the Cowboys settled for a chip-shot Brett Maher field goal. But it should’ve been more than that as Dak Prescott had Randall Cobb open in the end zone, but the throw was just out of his reach. In a game where scoring turned out to be scarce, that one hurt.

Jason Garrett made a gutsy call to go for it on fourth down in their own territory, and it looked good when Ezekiel Elliott plunged through the middle for the first. Except it wasn’t a first, because supposedly Zeke fumbled the ball. The officials ruled it a fumble recovered by the Saints on the field, but fortunately replay clearly showed Elliott’s elbow touch the ground while still having full control of the ball. However, the replay crew didn’t see it that way. They somehow rationalized that the ball could have been coming out before Elliott’s elbow touched turf, even though our eyes showed us something completely different.

Ball was not OUT when elbow hit ground…..defender was in process of pulling it out.

What’s the point of having replay if this is the result it’s going to produce?

Entering the game, Prescott was perfect in the third quarter, completing all 22 of his passes with three touchdowns and a perfect 158.3 passer rating. Well, Dak remains perfect as he was 6-for-6 for 73 yards on Sunday night, leading the team to their first touchdown drive of the game. That’s the good news.

The bad news is that the Cowboys offense only had one possession in the third quarter. The Saints received the second-half kickoff and went three-and-out, followed by the Cowboys touchdown scoring drive. But on the Saints second possession of the half, they churned out a nine-minute drive on 15-plays that chewed up the remaining time of the quarter.

8. Marshon Lattimore is “worth a first”

Actually, I have no idea if that’s true or not, but on Sunday night – he definitely looked like it. Last week, Amari Cooper lit up Pro Bowl corner Xavien Howard, and it sure looked like it was going to be a long day for the Saints former first-round corner. As it turned out, Lattimore was up to the task as he was all over Amari Cooper. Time and time again, Lattimore was smothering Cooper when Dak looked his way. Cooper finished with five catches for 48 yards, but he had to work for every bit of it. Not only that, but Cooper was flagged twice for offensive pass interference for using his hands to push off Lattimore.

Marshon Lattimore had struggled some this season, but he had two big pass break-ups tonight on third down targets to Amari Cooper.

The second break-up in the fourth quarter was also a good play by Cam Jordan to take away the scramble from Dak. pic.twitter.com/ug7RI2Aw8r

The Saints defense did a great job covering all the Cowboys receivers as the combination of Cooper, Randall Cobb, and Tavon Austin caught nine passes for just 93 yards.

9. Dak can’t take a sack there

Prescott is a playmaker, but sometimes those plays aren’t favorable to the Cowboys. It’s hard to be too critical of him because so many of these type of efforts have resulted in nice plays for Dallas, but Dak cannot take a sack like he did on the final drive of the game. Not only did it back the offense up deep in their own territory, but it consumed precious seconds off the clock. Prescott needs to have better awareness in those situations. Throw the ball away and live to fight another day. If the Cowboys have those extra seconds or even those extra yards, maybe that’s all they would’ve needed for Maher to attempt the game winning field goal?

Not only did the Cowboys lose the game, but they might be without their All-Pro left tackle for a while as Tyron Smith went down with a foot injury late in the fourth quarter.

In 2017, the Cowboys offense collapsed without Smith, so it’s unsettling to think he might not be on the field protecting Dak’s blindside. They do have Cameron Fleming who filled in well last season after Smith went down. Jerry Jones spoke briefly about Smith’s injury, saying it was a high ankle sprain.

Jerry Jones just classified Tyron Smith as a “high ankle” situation, although he didn’t have a ton of info other than that.

Let’s hope for the best that Smith’s injury is not too serious.