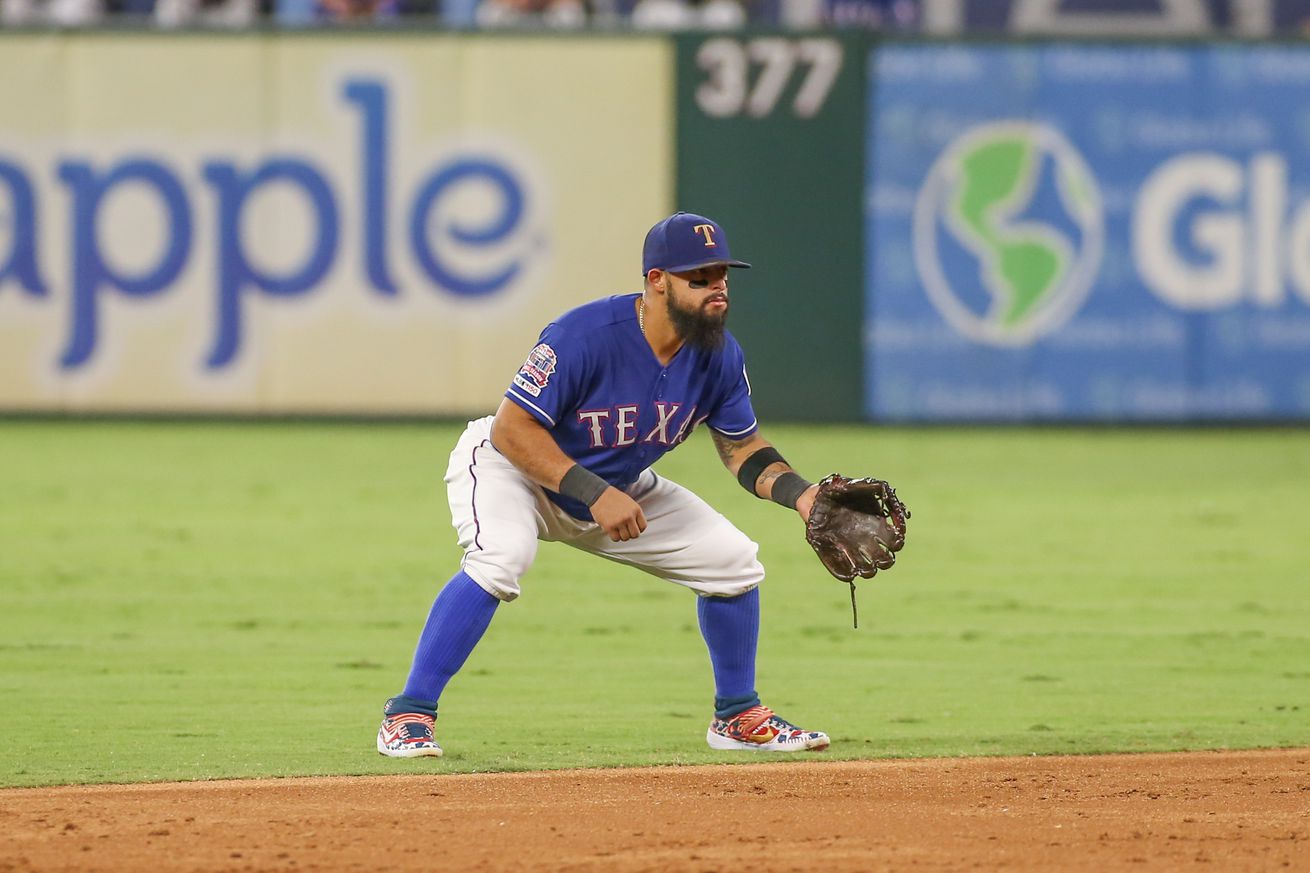 The Texas Rangers’ season is over, and the postseason starts tonight. The Rangers are now in a sort of organizational limbo for the next month, as they wait for the postseason to end and the offseason to begin, at which points players will have to be activated from the 60 day injured list, players will become free agents, and guys currently on the 40 man roster will likely hit the waiver wire.

So now is a good time to take a look at the state of the team’s 40 man roster right now.

Here’s who is currently on the 40 man roster, including players on the 60 day injured list:

That’s 45 players. Of that group, Pence, Forsythe and Volquez are free agents after the season. That gets the Rangers down to 42 players.

Nate Jones has a 2020 option that will almost certainly be declined, and Tim Federowicz was a warm body brought up to give the Rangers a backup catcher in September when Jeff Mathis was hurt. Dropping those two gets the Rangers down to 40 players.

Of course, the Rangers will need to clear some addition 40 man roster spots for the offseason. The team is likely going to be looking to add 4-5 players this offseason on major league deals, I suspect, which will necessitate clearing out roster space.

And in November, the Rangers are going to have to add a bunch of players to the 40 man roster who would otherwise be Rule 5 eligible. My guess right now is that seven players will be added to the 40 man roster — Leody Taveras, Anderson Tejeda, Joe Barlow, Demarcus Evans, Tyler Phillips, Sherten Apostel, and Eli White. Its possible Tejeda, White or Apostel gets exposed — Tejeda hasn’t played above A ball and missed most of the year with a shoulder injury, White is a low-ceiling guy who had a rough year in AAA, and Apostel is the type of corner bat that is really hard to carry on a major league roster all year — but I would assume that the Rangers will protect all seven guys.

There are other players who are Rule 5 eligible that one could conceivably make an argument for protecting — Pedro Gonzalez, Kyle Cody, Mike Matuella, to name three — but I think that those seven are really it as far as guys who will be added.

Take those seven players, assume we need five slots for major league additions, and now the Rangers have to pare 12 more guys from the 40 man roster. So, who would that be?

These are three pitchers who the Rangers seem almost certain to put on waivers once the season is over, and an outfielder who probably is a roster casualty as well. Biddle wasn’t good this year and barely pitched for the Rangers, Valdez is AAA depth, and Guerrieri wasn’t that good and is out of options. Granite had an okay season at AAA, and garnered some praise (particularly in comparison to the lamented and gone Carlos Tocci), but he seems like someone the Rangers would look to put on waivers and try to outright.

This is a collection of guys who didn’t have great 2019 seasons, for a variety of reasons, but who have at least one option remaining and who I suspect the Rangers would like to keep around, if possible. Bird and Gibaut came over from Tampa due, in no small part, to the fact that Tampa had a 40 man roster crunch. Farrell and Sampson give the Rangers AAA depth options as either multi-inning relievers or as starting pitchers. Mendez was hurt most of the year and has largely been a disappointment of late, but the Rangers have invested a lot of time and money in him, and his stuff played up in the pen. Huang was hurt a lot this season and righty relievers who rely on changeups don’t have a great track record of success. Pelham had a disastrous season, losing the ability to throw hard and throw strikes for much of the summer. Springs had health issues and wasn’t as successful as I think folks had hoped.

I am guessing the Rangers keep one of Sampson and Farrell, with the other one being cut loose, and I’d wager Springs is fairly safe. Everyone else on the list above would seem to be a candidate to be dealt or be put on waivers before the Rule 5 guys have to be added.

I scoffed at those who suggested that Montero, a former top 100 prospect who flamed out with the Mets, could be a major league option when he was rehabbing from Tommy John surgery early in the year. But Montero was called up, put up a 2.48 ERA and a 3.83 FIP in 29 IP over 22 relief appearances, and was being used by Chris Woodward in some key situations late in the year. He turns 29 this month and is arbitration eligible, and the Rangers have a bunch of righthanded relief options in house, so his spot isn’t guaranteed, but I would wager he’ll stick into spring training if he’s not traded.

The Rangers signed Kelley last offseason to a deal that included a $2.5 million 2020 team option with a $250K buyout. Kelley was great early on, and earned the trust of Chris Woodward as a reliable veteran back of the bullpen option. A health scare and injury issues slowed him down, and he had an 8.80 ERA in the second half of the season, turning what seemed like an easy decision (to pick up the option) into a more difficult one. It seems like you’d hang on to either Kelley or Montero, but not both, and I suspect the Rangers decline Kelley’s option and look to bring him back on a non-roster deal.

Veterans who could be dropped — Jeff Mathis, Shin-Soo Choo

Jeff Mathis was historically bad at the plate this year — not surprising, given he’s in his mid-30s and has spent his career as a historically bad hitter. Lance Lynn and Mike Minor had great years while primarily pitching to him, but I don’t know that it is a given that he’s back next year. Shin-Soo Choo isn’t going to be released, but given the number of outfield/DH options the Rangers have, I wouldn’t be surprised if they paid a good chunk of his contract and sent him elsewhere in the final year of his deal.

Young veterans who could be traded — Nomar Mazara, Rougned Odor

I mean, theoretically, anyone could be traded, but these are two guys who have disappointed lately, who play positions where the Rangers have other options in-house, and who the team could look to move on from.

Going back and looking through this, the roster situation is still fairly tight, and I probably overlooked someone who I should have mentioned. I wouldn’t be surprised if the Rangers end up making a minor deal or two to move a fringe 40 guy, or someone Rule 5 eligible this offseason, to another organization to help with the crunch.