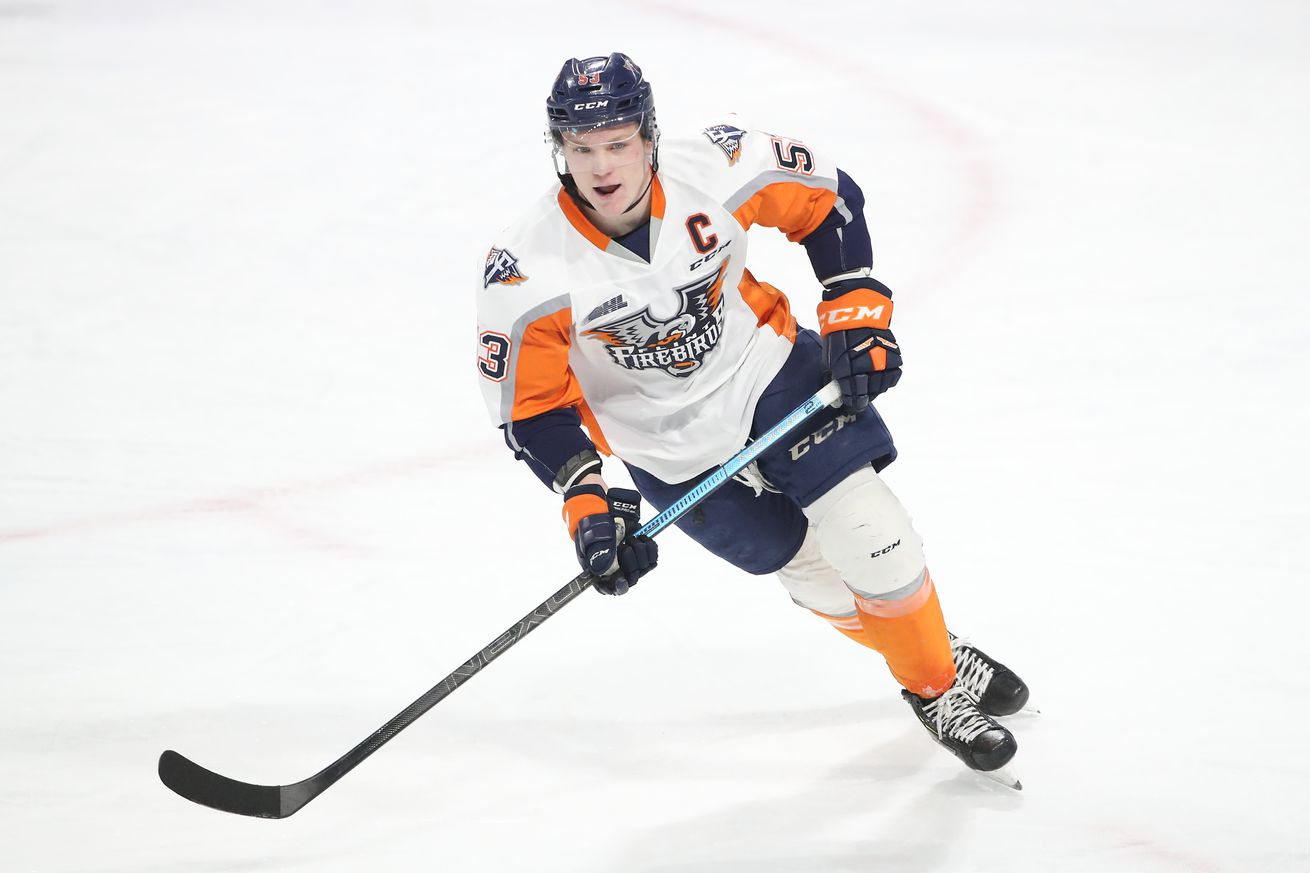 Elsewhere: Thomas Harley carries recent momentum back to the OHL, Dawson Barteaux celebrates his ELC with a pair of goals.

The Firebirds only officially came into existence in early 2015, when the Plymouth Whalers were sold and the league approved the organization’s intended move to Flint. Instead of a honeymoon phase, the franchise was immediately beset with a now-infamous scandal involving an overreaching owner and his son on the team, a fired-then-rehired-then-fired-again head coach, a team-wide protest straight out of a movie, and, ultimately, harsh disciplinary action from the league.

The drama off the ice eventually subsided, but the trouble on the ice began early and never really stopped. Out of a 20-team league, since 2015-16 the Firebirds have overall finished 18th, 12th (their one and only playoff appearance), 19th, and 19th again.

And right there, through most of these struggles, was forward Ty Dellandrea.

The Firebirds selected Dellandrea fifth overall in the 2016 OHL Priority Selection — just five days after the OHL suspended team owner Rolf Nilsen for five years and fined him $250,000. How’s that for a welcome party?

But despite everything that had happened in the previous year, Dellandrea decided to commit to the club that drafted him, even as veteran players on the team were demanding trades out of town. His insistence that he wanted to help turn around the fortunes of the franchise were one of the many reasons that the Dallas Stars liked Dellandrea enough to draft him 13th overall in the 2018 NHL Entry Draft.

Now, after three difficult and frustrating seasons, his plan might finally be bearing fruit.

It’s still early, but the Firebirds are off to a nice little start in their 2019-20 season, going 3-1 over their first four games. To put that into some perspective, the Firebirds didn’t earn their third win of 2018-19 until November 23, their 25th(!) game that season.

Dellandrea, their captain, has only played in two of this season’s games thus far after competing for a roster spot in Dallas, but has nevertheless factored into the team’s success, scoring a goal and an assist, as well as a shootout goal in a recent victory.

Here’s an outstanding goal from Ty Dellandrea, fresh off being sent back to Flint by the Dallas Stars.

One of the things that makes junior hockey so interesting to follow is that the fortunes of teams can swing dramatically in a hurry because players age out of the league so young. A team could be a powerhouse one season, lose much of their talent over the summer, and then miss the playoffs the next year. On the flip side, teams that fully commit to rebuilding usually only need a few seasons to become playoff contenders.

For the Firebirds, this year could be their year to bounce back. Beyond Dellandrea they have three other players who have been drafted by NHL clubs, at least two youngsters who will be in their draft years (including the second-overall pick in the 2019 OHL draft), overage goaltender Anthony Popovich (who won the OHL title last year with Guelph, and also attended the Dallas Stars’ 2018 development camp), and a few other intriguing players. There are enough pieces here to build a strong OHL team with.

Dellandrea might have narrowly missed his chance to make the NHL out of training camp, but bringing a successful season to all the long-suffering fans in Flint could be a nice consolation prize.

Speaking of Stars prospects who competed for roster spots, Thomas Harley is also back in the OHL and showing off what he learned during his time with Dallas, picking up four points in two games. His Mississauga Steelheads team will likely have a hard time making the playoffs this year, but Harley will learn what it takes to be a dominant player and can grow from the challenge of facing top competition each and every game. Also, don’t be surprised if he ends up playing a big role for Canada at this winter’s World Juniors.

Riley Damiani is also off and away in the OHL, picking up five points in his first three games.

First shot of the game, and he scores from the circle to put the Rangers up 1-0. #OHL #KITvsSBY pic.twitter.com/X8wEZ0nLoo

Similar to Harley, Red Deer Rebels defenseman Dawson Barteaux is going to log a ton of ice time this season on a team that will have to fight and scrape to make it to the playoffs. After a strong showing at the Traverse City Prospect Tournament and impressing the Stars’ brass in training camp, he signed his entry-level contract on Thursday, and followed up the momentous occasion by scoring goals in back-to-back games this past weekend.

Niklas Hansson, who has been somewhat forgotten as a Stars prospect but whose rights are still held by Dallas, is back in Sweden for this season with his former longtime organization, Rogle. He has four points in six games for them so far while logging an average of 20:32 in ice time.

The Texas Stars played a pair of preseason games over the weekend, both coming against the San Antonio Rampage and both ending in losses. Josh Melnick, signed in the spring as an undrafted free agent out of college, supplied two of the team’s three goals in the two tune-up matches. Like all preseason games, don’t read too much into the results.

Texas opens their 2019-20 regular season on Friday against the Tucson Roadrunners.