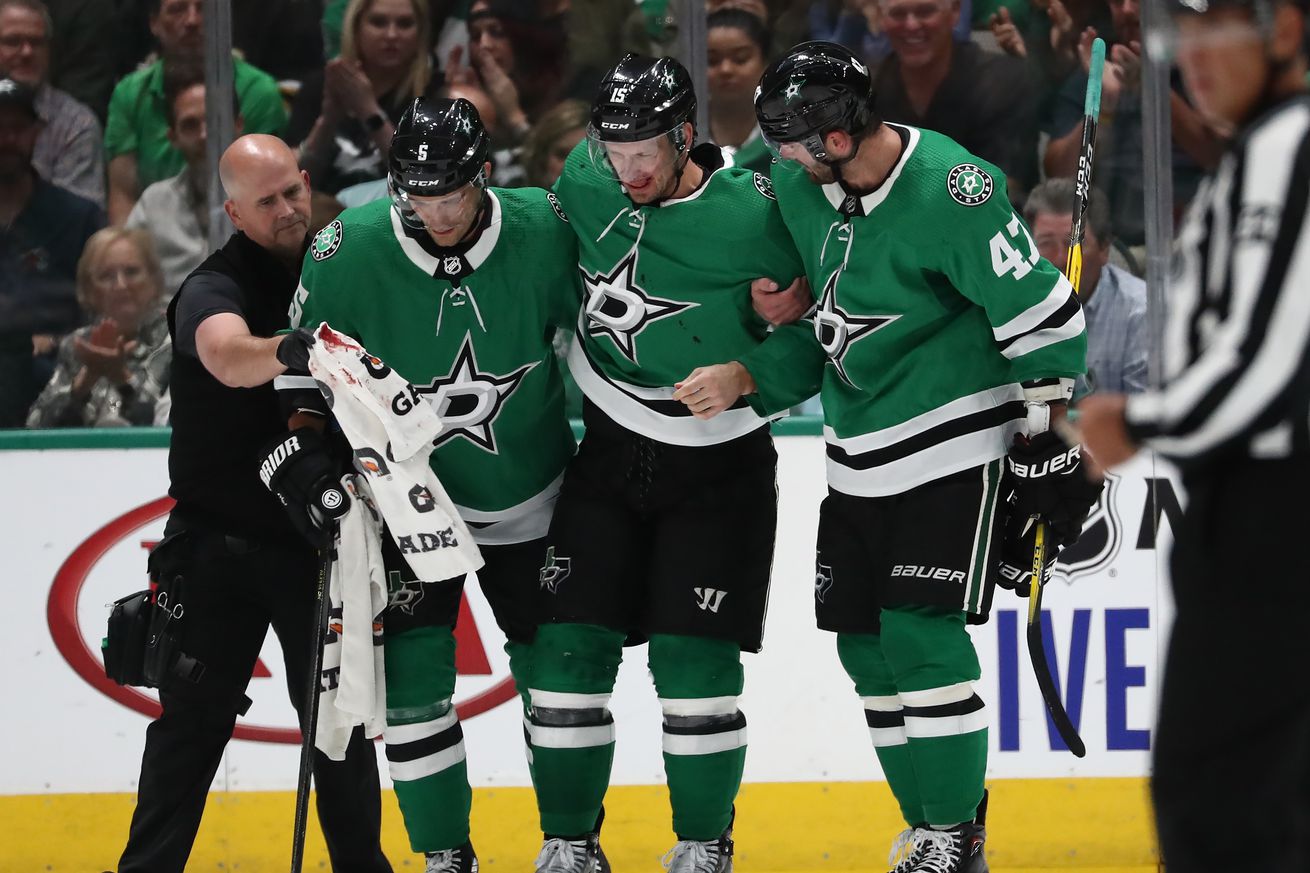 Roman Polak stretchered off ice, Jason Dickinson and Blake Comeau suffer injuries, and the Stars open the year with a 2-1 loss.

You can understand the sinking feeling many long-time Dallas Stars fans had after tonight’s season opener versus the Boston Bruins. After all, it felt a lot like the 2009 fight- and injury-filled fest that the Stars had in Boston. That game all but derailed the remainder of the Stars’ season.

This game felt awfully reminiscent of that, and it happened right in front of the home fans.

It started when Blake Comeau took a puck to the face late in the first period. The puck was deflected off of Andrej Sekera’s stick, and Comeau didn’t see the puck coming in his direction quick enough to do anything other than take the full brunt of it. He tried to get up and buckled back to the ice. At first, it seemed like he may have been woozy from getting hit in the head area, but the Stars PR staff announced later in the game that he would be out for the remainder of the contest due to a lower-body injury. Ice is slippery, and if the body is going one direction and then meets an object with great force, who knows what could have happened to Comeau’s lower body.

According to Jim Montgomery after the game, Comeau will miss “several weeks” after straining something in his lower body due to that awkward fall. He’s likely also going to need to recover from the puck to the face.

Then Jason Dickinson was missing from the bench to start the second period. He suffered an upper-body injury in the first period and wouldn’t return to the game tonight either. He’s expected to be out at least a week, pending results of an x-ray.

The worst, though, was when Roman Polak went awkwardly into the boards. It was a play that wasn’t unlike any other run-of-the-mill hard play into the corner. The Bruins player he went in after the puck with moved his body at the last minute. Polak’s momentum took him shoulder-first, then neck, into the boards.

It was a very scary scene after that as trainers came out to assess him and eventually strap him onto a stretcher to take him off the ice. The latest update on him is that he’s being evaluated at the hospital and has use of all of his extremities. You just hope it’s more precautionary than a real serious injury, because necks are nothing to mess around with.

After all of that, those feelings of October 2009 most definitely were at the top of mind for many long-time Stars fans.

At some point every season, each team’s depth is going to be tested. You just never think it’ll come quite so early into the year. Whatever your thoughts on Dallas’ farm system, I can tell you that it is improved over the 2009 prospects Dallas had at the time of their injuries that fateful game versus Boston 10 years ago.

Dallas suffered their stretch of injuries in November last year and it didn’t sink their season. They’ll have to draw on that and try to do the same again here to start the year. As head coach Jim Montgomery said, “Next man up.”

An uncharacteristic start for Ben Bishop led to the first two goals, which eventually ended up being enough to get the Bruins the win. The first was a shot that Bishop admitted post-game that he “should have had”. Brett Ritchie, who wasn’t even supposed to play tonight but found himself in the lineup due to David Krejci’s injury, sent a shot right through Bishop’s five hole just 69 seconds into the game.

Less than five minutes later, the penalty kill — which had been really good throughout the preseason and was a mainstay strength for Dallas last year — allowed the second (and eventual game-winning) goal. Bishop was screened in front and the puck found its way over the top of the 6’7” goaltender who was playing smaller trying to see the traffic in front of him.

Just like that, the game appeared to be out of hand for the Stars.

The injuries really hit hard from the second period onward, with Dallas having to play a short bench down nearly an entire line and one blueliner. However, after Polak’s scary hit and leaving the ice on the stretcher, Roope Hintz picked up where he left off at the end of last season’s playoffs with a dazzling goal to cut the lead to 2-1.

That’s really when Dallas started to turn it on and look like a cohesive group. They continued pushing the play and winning more puck battles, which drove their possession. According to Natural Stat Trick, Dallas had a phenomenal 69.57 CF% in the middle frame.

Not surprisingly, the middle frame seems to be the strongest for the Stars already this year. That was a trend we saw last season too.

After being caught a little flat-footed by Dallas in the second period, the Bruins ramped up their compete in the final frame. It honestly looked like two really good teams going toe-to-toe, and if not for the great saves made by Tuukka Rask and a crossbar that kept Tyler Seguin from scoring, the Stars would have likely come away with at lest a point tonight.

Dallas actually ended the game out-possessing the Bruins (51.28% to 48.39%). According to Owen Newkirk’s stats, the Stars were even with the Bruins in quality scoring chances (13-13). They outshot the opponent 29-20.

All in all, if the team can figure out how to play the last half of this game throughout the season, this team is going to be just fine. A big step forward for Montgomery’s team would be to figure out how not to have so many of the slow first periods we saw all of last year — and again tonight.

On the Bruins’ broadcast tonight, this was the exchange after Polak was down on the ice and in the process of leaving the game on a stretcher:

There is zero instance in which this kind of asinine commentary is acceptable after a player gets injured, but it’s especially abhorrent when a guy is being stretchered off the ice. Without knowing the extent of Polak’s injury, you’re going to really insinuate that he somehow deserved it?

No hockey player deserves serious injury. This is a game and it is never serious enough to warrant that. It’ll likely fly under the radar, because this was Polak, not one of the league’s superstars, and it’s Dallas, not one of the original six teams. But in 2019, I would expect better given the circumstance in which the comments were made.

Accountability and respect go hand in hand. It takes one to earn the other.