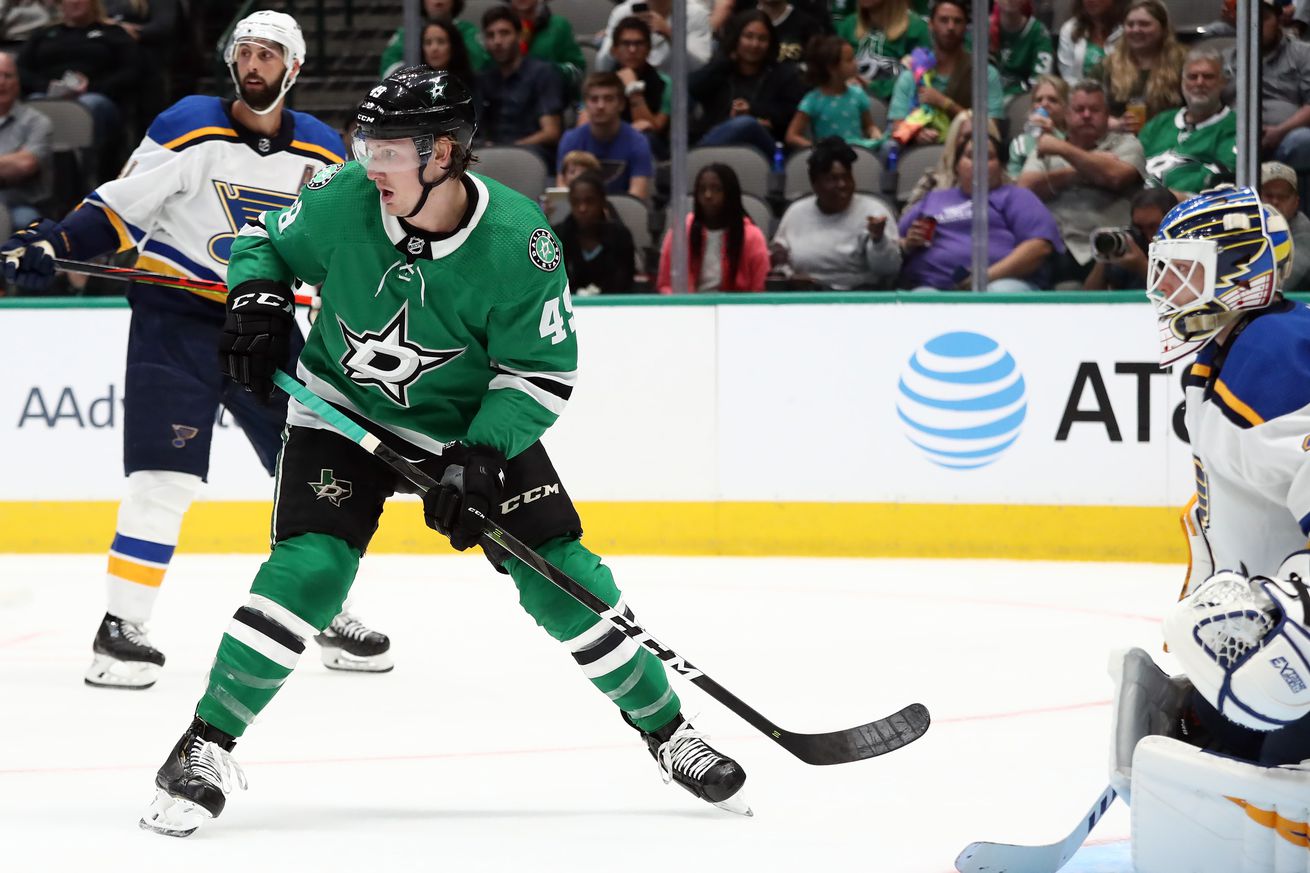 Just because they won’t start in the NHL doesn’t mean they won’t end up there this year. Plus, bold predictions for the upcoming season, the Stars’ Winter Classic logo gets revealed, and more.

The Dallas Stars finalized their roster yesterday, first by waiving Joel Hanley and returning Thomas Harley to the OHL, then by sending down Rhett Gardner, Nicholas Caamano, and Jason Robertson.

But just because a player didn’t make the NHL squad for opening night doesn’t mean the door is closed. There’s still a chance for a call-up, especially for the final cuts:

“These players did a good job in training camp, and we want them to know that we’re going to be monitoring what they’re doing, and they’ve got to go earn their way back here,” [head coach Jim] Montgomery said.

With the exception of Harley, all of the listed players will be with the Texas Stars this Fall — assuming Hanley clears waivers. So what can they do in the AHL to catch the eyes of the Dallas coaching staff?

“It’s confidence that comes from the drive,” Montgomery said, explaining how one leads to another. “If you win one-on-one battles, and you have the puck more, you’re like, ‘I can do this,’ and then you start doing it. Then your confidence comes and you’re helping the Dallas Stars win hockey games.”

You can read more from Mike Heika here.

Here’s what the head coach has to say heading into the Stars’ final preseason game tonight against the Colorado Avalanche:

Monty on what he’s looking for leading up to Opening Night:

“We’ve got to finish off the training camp well tomorrow with our best effort to get prepared for pace of action and the game we want to play starting next Thursday.”#GoStars pic.twitter.com/BvsnXCr75S

Snow on the day of the Winter Classic? That might just be the boldest prediction Saad Yousuf has made here:

Regular-season hockey is only days away! With that in mind, @SaadYousuf126 worked up 10 bold predictions for the Stars’ 2019-20 campaign. https://t.co/PjEnECLoms

Speaking of which, looks like the Stars’ logo for the Winter Classic has been revealed:

And the RFA dominoes keep falling — Patrik Laine has agreed to a two-year deal with the Winnipeg Jets:

#NHLJets have agreed to terms with forward Patrik Laine on a two-year contract with an average annual value of $6.75 million.

Jonathan Drouin probably isn’t on the trading block for the Montreal Canadiens, but if he is… should he be?

Instead of questioning whether the trade rumors are true, we should question how much sense it would actually make for Montreal to trade Jonathan Drouin, writes @THNMattLarkin: https://t.co/5tePXewCtX pic.twitter.com/kPOzkecdnD

Not everyone makes headlines their rookie year like Miro Heiskanen. Here are some sophomore breakout candidates to keep an eye on:

Which second year players are going to have a big year? ⬇️https://t.co/RzJ7FrsXYi

Down Goes Brown takes a look at the (first) NHL lockout 25 years ago and ponders all of the potential “what if”s :

To mark the 25th anniversary of the NHL’s first lockout, @DownGoesBrown imagines what the league might look like if things had played out a different way. https://t.co/mIjh5jrY9W

Finally, back-to-back Stanley Cups are rare in the NHL, but the St. Louis Blues have confidence they can do it: