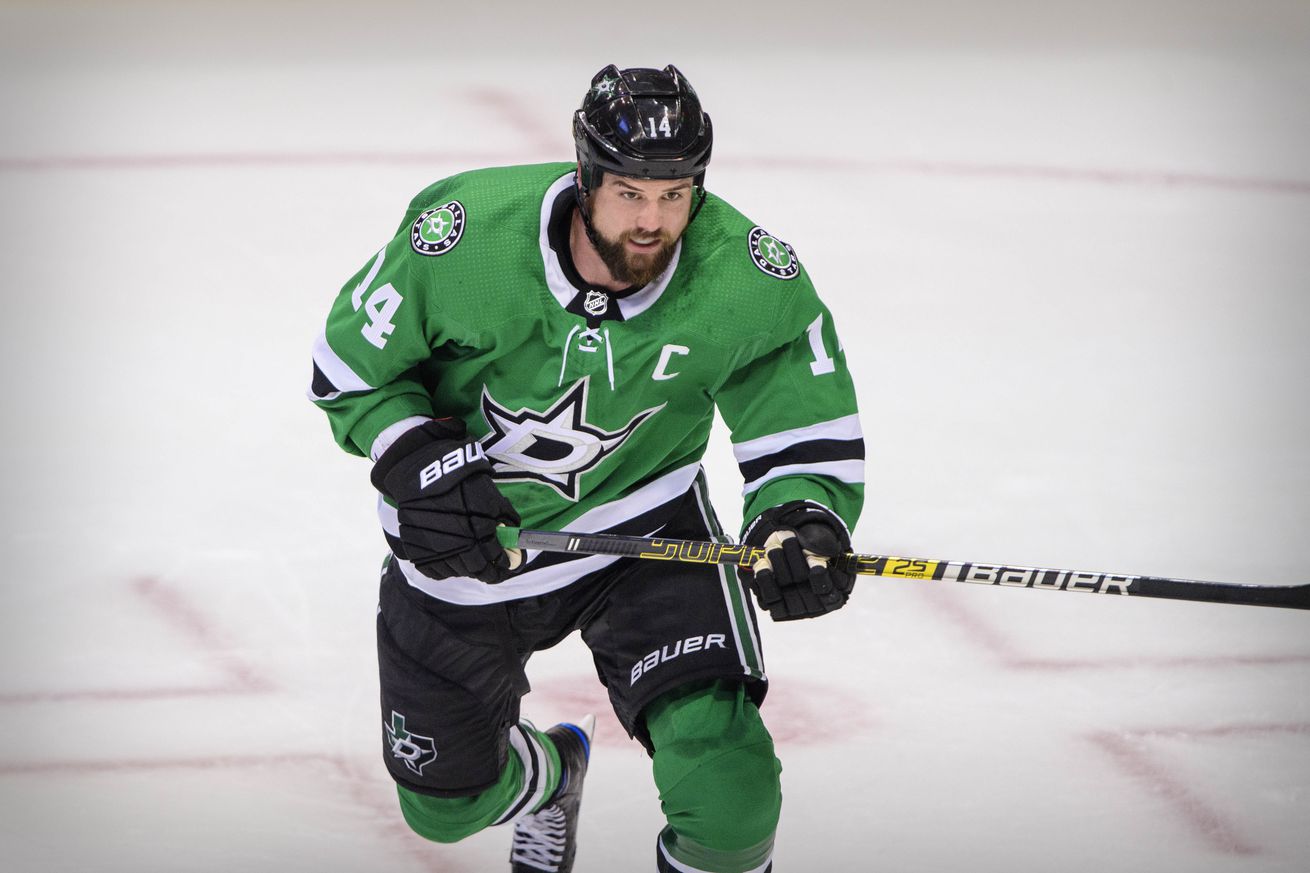 The team needs him to be better, and The Captain is planning on it. Plus, the Caps spoil the Blues’ banner party, the Leafs give Tavares a C, and more.

Jamie Benn doesn’t find any comfort, cold or otherwise, in the fact that the Dallas Stars were eliminated in the second round of the playoffs by the team that would go on to win the Stanley Cup. If anything, that missed wraparound in Game 7 haunts him more than it does you.

In response, the man who once ranked as the best left wing in the NHL has committed his considerable focus to choreographing his own comeback.

The Dallas Morning News’ Matthew DeFranks has written a new article on Benn’s offseason, in which he changed his skates, his sticks and even his stride. Figure skater Luke Chilcott became The Captain’s personal coach and details their routine:

“We looked at at least one or two changes we could sensibly make in a summer that would then transfer to the season,” Chilcott said. “Some of the habits with some of the guys are tough to break, but if you can have just one or two focuses, like with his stride, it was more of a directional change. Where are you going to put that effort? So we managed to at least accomplish that over the summer. In general, this is the first time he’d really worked on skating technique, edge work, skating mechanics overall.”

The pair began with the basics, at about 40% effort in early June before ratcheting up the intensity as the summer turned to fall. As the Blues celebrated a championship, Benn went back to work.

(Benn said he didn’t watch the rest of the playoffs after the Stars were eliminated: “Probably not even a whole game, maybe one period. When you’re not in it, you kind of lose interest. It sucks when you find out that the team that knocked you out won the Cup.”)

If Benn can once again produce at the level to which he’s become accustomed, the Stars’ season becomes brighter almost instantly, and he and his bosses know it:

”It’s no secret, Jamie’s disappointed in his season last year,” general manager Jim Nill said. “He did a lot of great things, I think in the playoffs. He was one of our better players, so I thought he was coming around. But Jamie’s got a lot of pride. He’s been here all summer skating. He’s been working with a power skating instructor. He’s in as good of shape as he’s ever been, and these guys have a lot of pride. They’re in the NHL for a reason.

”He’s our captain. He’s going to lead the way for us.”

There’s more behind the DMN paywall – and here’s a little video perspective from the Stars. [SportsDayDFW]

Mike Heika has a few thoughts before the season begins.

One dream in mind before bed. #GoStars https://t.co/50OrLB5MHe

John Klingberg offered Esa Lindell contract negotiation advice. Entertain yourself by imagining what the Stars’ elite defenseman will get when it’s renewal time.

Esa Lindell got paid, big, this summer. His buddy John Klingberg wanted to make it known he wasn’t getting in the way of that https://t.co/TIDZaK8VCj pic.twitter.com/HBDU35K21P

The season has begun, so let’s get studious.

Class is in session.

Time to start working toward acing the @StanleyCup Final. pic.twitter.com/gaV0ZtQaIE

In On The #Kill Taker

The Toronto Maple Leafs have announced their new leadership team, and John Tavares is wearing the C.

It’s never too early to start predicting the rookie of the year, so here’s Matt Larkin with a few hot takes to get you started.

Meanwhile, Brady Tkachuk and the Ottawa Senators started the season with a bang.

The NHL record for fastest goal from the start of a season opener is 0:10, scored by North Stars forward Kent Nilsson (Oct. 11, 1986 vs. QUE). #NHLStats #NHLFaceOff pic.twitter.com/BGYrtjXn52

The Stars’ media guide includes a nice tribute to longtime beat writer Mark Stepneski. Now if only he were wearing a Hawaiian shirt. Enjoy.

Really nice touch by the Stars’ PR team to pay homage to @StarsInsideEdge in this year’s media guide. pic.twitter.com/nDHv7mSmFj